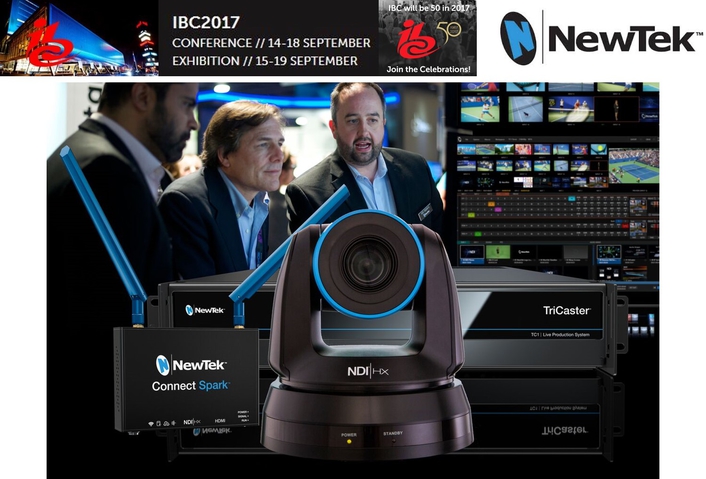 NewTek will also showcase the award-winning TriCaster TC1 and IP Series, the most complete production solutions available to the industry. These systems provide switching, streaming, recording in HD, 3G, and 4K UHD 60p on all inputs. At the heart of NewTek’s IP revolution is royalty-free NDI technology. All of these products utilize NDI version 3, the third generation of NewTek’s IP video technology standard. This new version provides advanced features and performance improvements while maintaining full forward and backward compatibility. Among dozens of other enhancements, NDI version 3 supports multicast with forward error correction; a high efficiency mode suitable for wireless or long distance transmission; PTZ camera control and tally; improved encoding performance, and much more.

NDI has become the de facto industry standard for sharing IP video over a one Gigabit Ethernet network, infrastructure which already exists throughout schools, hotels, businesses, houses of worship, stadiums and other live venues. Millions of NDI-enabled applications, devices and systems are in use and NewTek will be demonstrating how the NDI standard is the fastest, easiest way to get IP video into your production.

NDI is in use on millions of devices and allows multiple video systems to identify and communicate with one another over IP. NDI can encode, transmit and receive many streams of high quality, low latency, frame-accurate video and audio in real time. This benefits any network-connected video device, including video mixers, graphics systems, capture cards, and many other production devices. This makes it possible to exponentially increase the number of sources available for live production switching, without directly attaching to devices, changing locations, or investing in expensive, high-bandwidth networks that simply replace SDI-based workflows.

As the leader in IP video technology, NewTek is transforming the way people create network-style television content and share it with the world. From sporting events, Web-based talk shows, live entertainment, classrooms, and corporate communications, to virtually any place people want to capture and publish live video, we give our customers the power to grow their audiences, brands and businesses faster than ever before.

NewTek is privately owned and based in San Antonio, Texas