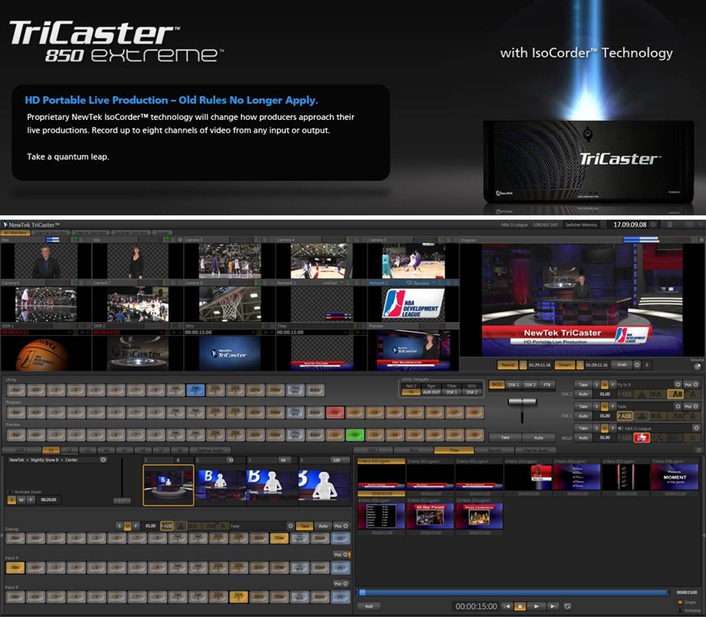 TriCaster 850 EXTREME includes proprietary NewTek IsoCorder™ multi-track recording technology, which provides the ability to record up to eight channels of video from either inputs or outputs. TriCaster 850 EXTREME offers important additional benefits, such as direct support for any Apple® AirPlay®-enabled app or device, plus EQ and compressor/limiter capabilities on every audio input and output.

"TriCaster 850 EXTREME is a groundbreaking product; a quantum leap as large as any other innovative product that NewTek has introduced,” said NewTek Chief Technology Officer, Andrew Cross. “We have overcome the technical challenge of recording eight channels of HD video, simultaneously with HD virtual sets and HD streaming in one system, which was previously thought unrealistic in the live production market.”

• Proprietary NewTek IsoCorder Technology – Multi-track recording technology lets you record up to eight channels of video from any input or output, and supports multi-format recording with adjustable audio headroom.

• Apple AirPlay Support – Add video and audio from any AirPlay source – such as iPad®, iPod®, or iPhone® – into your live production. TriCaster supports two simultaneous AirPlay audio/video streams. It’s wireless and instantly compatible with any AirPlay-enabled app or device.

• Import Media – Select and import all types of media files, including Apple ProRes for use in TriCaster Media Players, with expanded file format compatibilities and quick batch processing.

• Linear Timecode (LTC) Support – Decodes the time value from the audible signal, and uses it for clock displays and embedded timecode when recording video.

Another unique feature of TriCaster 850 EXTREME is the addition of a Quick Response (QR) code in the user interface. Users can click a button in the title bar on TriCaster’s Live Desktop to reveal the QR code, scan it (e.g., with their iPad, iPhone or mobile device), and have immediate access to the TriCaster 850 User Guide, without interrupting their live production.