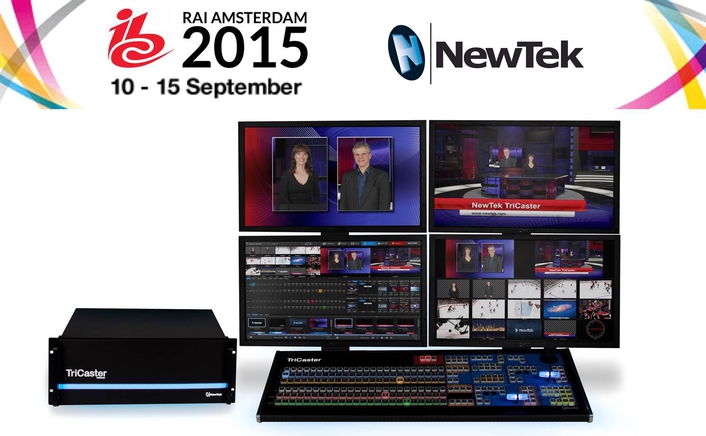 At IBC2015 NewTek will showcase its full range of TriCaster™ multi-camera video production solutions, along with its 3Play™ sports production solutions and the acclaimed TalkShow™ VS-100 video calling production system. The company will demonstrate why its professional video production tools are the most complete in the world, preferred by media companies seeking more cost-effective ways to produce high quality content that helps them to grow their audiences, brands and businesses.

“NewTek has opened up the world of professional quality broadcasting to those with big ambitions, regardless of budget,” said Dr. Andrew Cross, president and chief technical officer for NewTek. “Our range of live production solutions offer broadcasters and content creators unprecedented levels of professional functionality and visual impact that help them engage with their audiences, at an affordable cost.”

IBC2015 will be the first international showcase for TriCaster Advanced Edition since it became available in May, providing broadcasters with augmented reality capabilities in their virtual studios, automated graphics creation based on data fields instead of manually typing in text, scores or stats, custom-programmable Web interface to control TriCaster from a browser, both audio and tally over IP, and mixing stored media clips right in their players while streaming live, and much more.

NewTek will also show a selection of its latest TriCaster models, including the flagship TriCaster 8000 which provides a premium 8 M/E production switcher, built-in failsafe and redundancy capabilities, and extensive router support for enhanced broadcast integration, massive multi-camera coverage, and mission critical high-end productions of any size.

Also on the booth is TalkShow™ VS-100, the video calling production system designed specifically for television studios and live video producers, enabling them to connect to millions of connected Skype users and seamlessly integrate them as guest speakers into any live production.