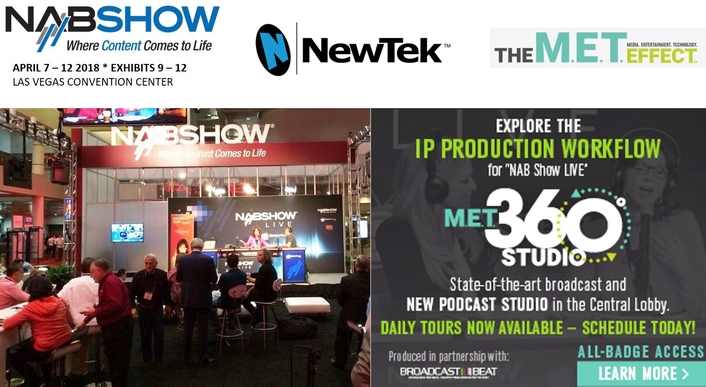 A state-of-the-art, all-NDI® IP workflow featuring NewTek live production tools will serve as the backbone for NAB Show LIVE streaming broadcast from the Las Vegas Convention Center Central Hall Lobby at NAB from April 7-12, 2018. Produced in partnership with Broadcast Beat, NAB Show LIVE will feature 40 hours of live content to capture the scope and influence of NAB while presenting buzz-worthy moments and hot topics as they happen.

“We’re amazed at the simplicity of connecting cameras and devices via NDI and the creative flexibility it provides us. A great visual is the noticeable lack of SDI cables running everywhere to everything all of which are replaced with single CAT5 cables now that we use NDI,” said Ryan Salazar, CEO of Broadcast Beat. “We had such intense interest in our workflow last year from NAB attendees, that we decided to offer guided tours this year.”

New to NAB Show LIVE this year is an additional Podcast studio that will feature more NDI PTZ1 cameras feeding a TriCaster® TC1 multi-camera live production system. Also new will be tours of the main M.E.T. 360 studio control room. NAB Show attendees can register for a Behind-The-Scenes Tour of the Control Room and Podcast Studio here.

Every camera and NewTek production tool are interconnected via single CAT5 Ethernet cables, eliminating the cost and time it takes to connect each device one channel at a time using SDI cables. Additionally, the PTZ1 cameras receive audio, video, tally, PTZ control, and power over Ethernet with one cable.

“NewTek is honored to be part of NAB Show LIVE,” said Scott Carroll, director of Communications for NewTek. “IP workflows are a growing and unstoppable force in the industry and we're proud to demonstrate our all-IP end-to-end technology at such a highly visible and influential venue like NAB Show LIVE.”

As the leader in IP video technology, NewTek is transforming the way people create network-style television content and share it with the world. From sporting events, Web-based talk shows, live entertainment, classrooms, and corporate communications, to virtually any place people want to capture and publish live video, we give our customers the power to grow their audiences, brands and businesses faster than ever before.

NDI is in use on millions of devices and allows multiple video systems to identify and communicate with one another over IP. NDI can encode, transmit and receive many streams of high quality, low latency, frame-accurate video and audio in real time. This benefits any network-connected video device, including video mixers, graphics systems, capture cards, and many other production devices. This makes it possible to exponentially increase the number of sources available for live production switching, without directly attaching to devices, changing locations, or investing in expensive, high-bandwidth networks that simply replace SDI-based workflows. #NDIcentral