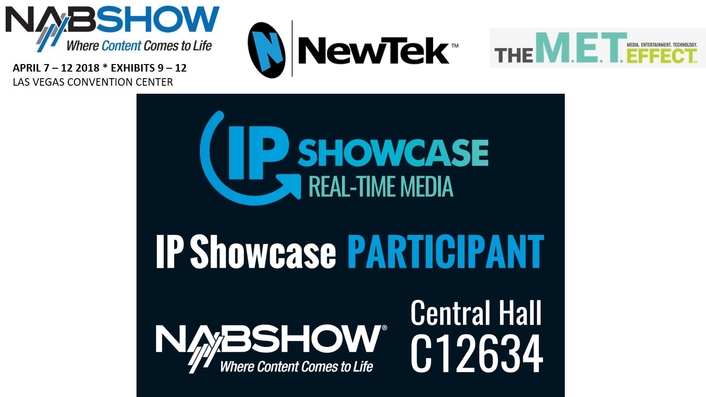 The NC1 IP will be on display as part of the IP Showcase of SMPTE ST 2110 interoperability at NAB Central Hall Booth C12634 from April 9-12 at the Las Vegas Convention Center.

“Since our inception, NewTek has always believed the future of broadcast production is software and IP networks,” said Dr. Andrew Cross, president and CTO for NewTek. “Now that SMPTE ST 2110 is realized, the NC1 Studio I/O IP Module serves as a critical gateway to fully expanded software-driven production and one giant step closer to the promise of virtualized control rooms. We are very excited to have the NC1 I/O IP working alongside the other SMPTE ST 2110 devices in the IP Showcase at NAB.”

The NC1 Studio I/O IP Module has 4 channels that can be set to input or output SMPTE ST 2110 video sources. Each channel can be independently configured for resolutions up to 1080p at 60 frames per second. NC1 I/O IP will interoperate with systems and devices across a network for switching, streaming, display, and delivery. Modules can be stacked in a single location or stragetically deployed in multiple locations to meet the demands of any production.

The NewTek NC1 Studio I/O IP Module is priced at $14,995 US MSRP and will begin shipping in Q3 2018. International pricing will vary.

As the leader in IP video technology, NewTek is transforming the way people create network-style television content and share it with the world. From sporting events, Web-based talk shows, live entertainment, classrooms, and corporate communications, to virtually any place people want to capture and publish live video, we give our customers the power to grow their audiences, brands and businesses faster than ever before.
Clients include: New York Giants, NBA Development League, Fox News, BBC, NHL, Nickelodeon, CBS Radio, ESPN Radio, Fox Sports, MTV, TWiT.TV, USA TODAY, Department of Homeland Security (DHS), the National Aeronautics and Space Administration (NASA), and more than 80% of the U.S. Fortune 100.

NDI is in use on millions of devices and allows multiple video systems to identify and communicate with one another over IP. NDI can encode, transmit and receive many streams of high quality, low latency, frame-accurate video and audio in real time. This benefits any network-connected video device, including video mixers, graphics systems, capture cards, and many other production devices. This makes it possible to exponentially increase the number of sources available for live production switching, without directly attaching to devices, changing locations, or investing in expensive, high-bandwidth networks that simply replace SDI-based workflows. #NDIcentral