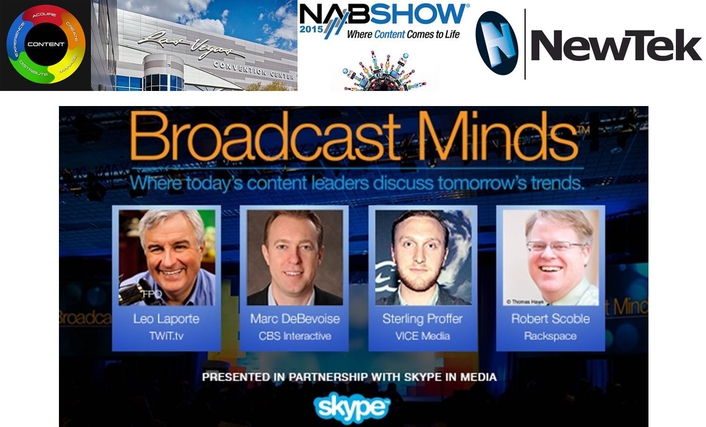 Leo Laporte, founder of TWiT.tv, to moderate guest panel
NewTek™ today announced that Broadcast Minds™, the go-to panel at NAB 2015 providing insight from leading voices in the modern digital landscape on the future of broadcast communications, is returning for its sixth year at the NAB Show. This year’s event is presented in partnership with Skype in Media and will feature dialogue between industry experts from CBS Interactive, Rackspace, and VICE Media. The discussion will be held on Monday, April 13 at the Las Vegas Convention Center South Hall Room S222. Doors open at 4:30 p.m., PDT. The panel discussion will start at 5:00 p.m.

“In 2015, broadcasters are expected to have a multi-platform strategy where fans can choose when and how they watch their shows and consume their content,” said Philip Nelson, chief relationship officer for NewTek. “As a result, these innovative individuals have found new ways to produce compelling content through video and will share their insights into what they believe the future holds for our industry.”

The Broadcast Minds event at the 2015 NAB Show is open to all registered attendees. Those unable to attend can register here to watch a live stream of the discussion. Join the conversation at #broadcastminds.

Now in its sixth year, Broadcast Minds has established itself as a valuable resource and inspiration for not only the broadcast industry, but also new audiences interested in producing professional video.

About NewTek
NewTek is transforming the way people create network-style television content and share it with the world. From sporting events, Web-based talk shows, live entertainment, classrooms, and corporate communications—to virtually any venue where people want to capture and publish live video, we give our customers the power to grow their audiences, brands and businesses, faster than ever before.
Clients include: New York Giants, NBA Development League, Fox News, BBC, NHL, Nickelodeon, CBS Radio, ESPN Radio, Fox Sports, MTV, TWiT.TV, USA TODAY, Department of Homeland Security (DHS), the National Aeronautics and Space Administration (NASA), and more than 80% of the U.S. Fortune 100.