News Around the Clock

ORF RP7 control room equips with Lawo technology
With its first news programme prepared at 8.30am and its last run at midnight, the “Regieplatz 7” (RP7) TV news control room at ORF (Österreichisches Fernsehen) operates for 16 to 17 hours per day, seven days a week. In fact, RP7 clocks up the greatest number of operating hours of any control room operated by the Austrian public broadcaster. Unsurprisingly, after twelve years of continuous operation, RP7’s technical installation had reached the end of its working life.

A thorough refurbishment was commissioned in July 2012 to bring the control room in line with current technology, including switching from SD to HD production. To ensure its audio facilities matched the new picture standards, the upgrade included two Lawo mc²66 digital broadcast mixing consoles. 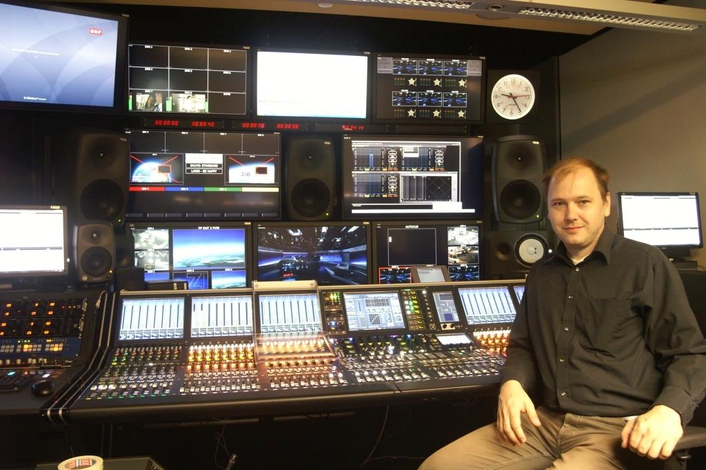 Engineer Reinhard Tomek in front of the new Lawo consoles

The main console is fitted with 56 faders (24-8-24) and the second with 24 faders (8-8-8). Each of the consoles comprises 240 DSP channels and one Plug-in Server. A Lawo Nova73 HD router supports the central matrix with DSP as the mixing console core – this offers 51 MADI ports and has a routing capacity of 8,000 times 8,000 crosspoints. As this is a news control room, both PSUs and the router boards are redundantly configured. The stageboxes are fitted with redundant MADI boards and cabling. Also redundantly designed are the five Netlink-MADI crosslinks between the Nova73 HD and the consoles: “Both consoles are networked via a central matrix so that it is possible to switch from one console to the other within the control room. The console cores are identical, and integrate 16 MADI ports each”, explains engineer Reinhard Tomek, who was responsible for project management of the refurbishment.

RP7’s smaller console takes care of programme pre-mixing so that for larger programs – such as coverage of parliamentary elections – the local reporter units and local studios can be assigned (e.g. via telephone) and satellite uplinks can be established promptly. This frees the sound engineer at the larger console to take control of the live program, using the feeds from the smaller console.

Identical console
In summer 2012, an identical main console had been installed at ORF’s Regieplatz 1 (RP1); a production control room used for lottery jackpot draws, talk shows and magazine programmes, as well as larger TV shows. And for particularly big productions, RP1 can be linked with other studios. The first programming to be produced using the Lawo mc²66 at RP1 were magazine programs, followed by “Dancing Stars”. With the refurbishment of RP7, now RP1 and RP7 are identical so that, in case of a technical problem, all programs can be covered by the “sister” control room. “The mixing consoles in RP1 and RP7 provide six ports for connecting stageboxes. Two stageboxes are assigned to each studio, but these can be distributed as required. In addition, there are four stageboxes in the ‘TV Theatre’”, says Tomek. 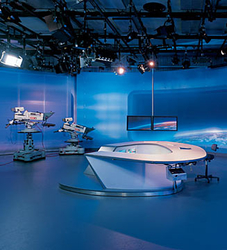 “The decision to install a second Lawo console in RP7 was based on a bidding process conducted some years ago, that was won by Lawo. During one cycle of investment, we place high value in adopting one product model. With regard to mixing console technology, this results in benefits in spares pooling, servicing, and contact as well as training. Moreover, our sound engineers work at different production facilities – studios and OB trucks – and find the same operating philosophy and the same console surface everywhere”, Tomek explains.

As a direct result, all ORF sound engineers and Tonmeisters can work in different OB vans and studio control rooms without the need for specific training. Presently, Lawo consoles are installed in almost all ORF OB vans and regional studios’ production control rooms. This enables efficient workflows, while the consoles’ configurability allows them to be adapted to changing requirements.

For a broadcaster like ORF, the availability and dependability of its equipment is of critical importance. “With Lawo, ORF has a partner that both supplies quality products and also, if problems occur, helps out competently and, first and foremost, quickly”, closes Tomek.

Lawo, headquartered in Rastatt/Germany, specialises in developing, designing and manufacturing mixing consoles and matrix systems for radio and TV broadcasters, as well as for use in live events. Recently, Lawo offers also professional video equipment for the broadcast sector. Standards of high quality and innovative technology are supported by more than 40 years of experience in the field of professional broadcast technology.
Lawo’s product range covers digital audio mixing consoles for use in radio, broadcast, production and live applications, including the required software. In addition to the provision of matrix systems and audio networks, Lawo also offers video processing equipment. The company also carries out project engineering tasks as well as user training and maintenance. This high level of expertise results in a comprehensive support service for Lawo customers.