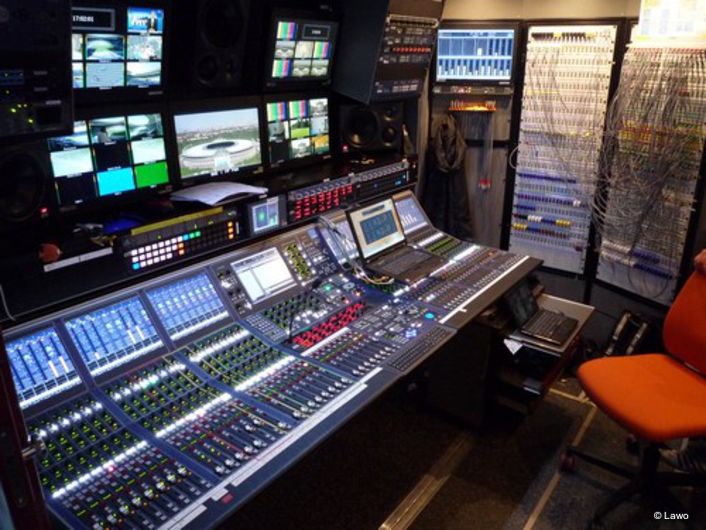 Lawo mc²66
On your marks, get set, go! 9.58 seconds later Usain Bolt had written history again. The sprinter from Jamaica beat his previous sensational time at the Olympic Games by an amazing 11/100 secs, and celebrated his win with his signature archer’s pose. This was only one of the many highlights of the Athletics World Championships in Berlin. This exciting sports event was broadcast in HD by ZDF’s new MP-4 OB truck.

After a trial period – a football match between Germany’s female national team and Japan – the World Championship in Athletics was the first real test for the new MP-4. As it was also for the two Lawo mc²66 mixing consoles installed in this OB truck. The vehicle had been delivered only about a week before departure to Berlin, as had the new editing suite trucks, DPM 1+2, and the master control room container, MPS-S, recently upgraded to HD and now equipped with a Nova73 HD router from Lawo. Thus the on-site production in Berlin was the first possible intensive action that would involve all these systems. “From day one, the combined effort of all the production units ran really smoothly,” reported Thomas Velte, senior sound engineer during the IAAF World Championships in Athletics. The transfer of audio signals between the MCR and MP-4 is carried out via MADI interfaces. As well as handling the broadcast and recording lines, ZDF‘s MCR also handles the input and de-embedding of various feeds. The Riedel Artist matrix system in the MCR (128 ports) is interfaced via optical fibre to the Artist system in the MP-4 OB truck (around 270 ports), where the complete system is controlled. This means that about 400 talkback ports are available. One of the tasks of the Lawo console in Audio Control Room 1 is to handle 130 audio channels; some sources from the international feeds are controlled via tally coupling by the video mixer (Audio-follow-Video technology).

“The MP-4 OB truck is ZDF’s first entry into mobile HD production”, explains Christoph Matlok, the ZDF sound engineer who, together with Klaus Wesselsky, was responsible for the audio control room design and realisation. The vehicle is fitted with 16 normal cameras plus two super slomo cameras. All common video systems can be interfaced. The production requirements are very wide, and range from regular shows to concert recordings of rock and classical music, from theatre to large sports events, plus the broadcast of political events. “In addition to a high degree of flexibility, we focussed on essential reliability and ease of maintenance”, Matlok continues. For the flexible adaptation of up to 30 workplaces to various requirements, a KVM matrix is used to connect computers to their respective workplaces. The two audio mixing consoles are movable, which enables the crew to easily adjust them for different monitoring situations. For the adequate interface of analogue signals, the audio control room includes a Lemo patch bay connected with 24 10-way cables to an external connector panel, providing 80 Mic/Line Ins and 80 Line Outs. The complete vehicle (video and audio matrix) is controlled via Virtual Studio Manager (VSM) software from L-S-B. Signals are embedded; the Lawo consoles provide 50 embedder/de-embedders, the video area offers another 20 Lynx embedder/de-embedders. All control rooms can provide up to 5.1 monitoring.