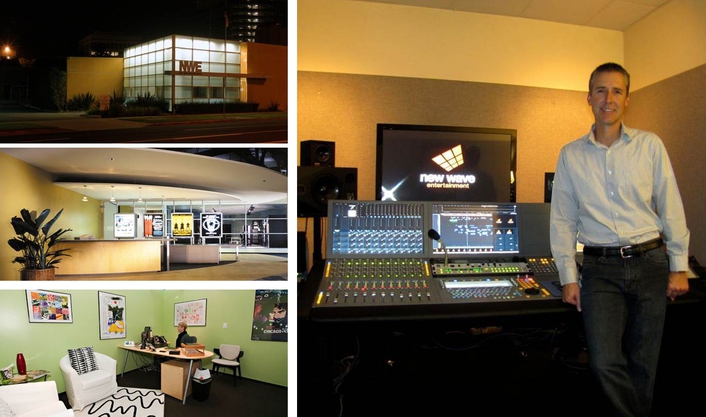 New Wave Entertainment, located in Burbank, California, specializes in the creation of content, which spans the realm of creative marketing for TV networks and major motion picture studios to original TV programming. Their work has supported campaigns for blockbuster movies such as Avatar, Harry Potter, The Hangover Part 2, Happy Feet Two, and Alvin and the Chipmunks. Some of their recent TV promo work includes a spot for “The Ellen Degeneres Show” which was awarded a Creative Emmy, and a TV launch campaign for “Extra.”

New Wave Entertainment has five production suites, each with Fairlight’s EVO console. One room hosts the Xynergi console with a sidecar, adding tactile mixing controls. That elevates the traditional console-like hardware interface on the Xynergi platform to a full range of audio production capabilities from recording, editing and mixing. With limited space, the, the compact digital consoles of Fairlight provide the luxury of additional rack space.

A majority of the work New Wave tackles is on-air marketing, including television spots and theatrical trailers. They also do a large amount of Blu-ray Features & Menu Design, Broadcast Design, Mobile Content and 3D Modeling and Animation, which has been enabled by the flexibility of Fairlight consoles.

According to Mark Rodrigues, Chief Engineer and Senior Mixer for New Wave Entertainment, “The biggest selling point for us is the new dual video track, allowing us to work with 3D video. As 3D advances, the Fairlight systems give us the chance to evolve as well. The dual track helps us recognize the changes being made as many eyes are constantly viewing the content and adding input.”

“The presentation of the video track makes it extremely easy to follow. The ability to take video sections from one spot and string together a bunch of segments with the added option to edit with sound included is fantastic,” Rodrigues added.

With five suites each working on the same project, New Wave can do 20 spots and convert them to 10 different versions for different broadcasts quickly. Everyone can mix the same way with default settings for standards and compression, and simply add in their changes, which helps Rodrigues to take on the substantial number of projects that they do. “A project can be posted on a FTP site and we can be ready to mix and edit it within seconds.”

For Rodrigues, the drag and drop conversion process helps to save time and energy and allows workflow to stay constant. He notes, “Quicktime support is very valuable to us since most of our approval isn’t done in-house. It’s great to send short clips and have our clients understand what we are working on and they can give their input as well. We can change the frame rate and merge different files together without a worry.”

Rodrigues says one feature he enjoys is the ability of Fairlight to have full support of native plug-ins wherever you need it. “We use it on a daily basis for surround mixing and dialogue cleaning, and it has enhanced the process of editing.”

“I’ve always loved the sound with Fairlight consoles,” adds Rodrigues. “They have a warmth that other systems lack. Everything has worked out extremely well and we are happy with everything that Fairlight offers from the speed of workflow to the support that they have given us to help us meet the needs of our clients.”