.
More than 9,000 visitors attended the Radio Days event held by German public broadcasters’ association ARD between 5-9 November at the Center for Art and Media Technologies (ZKM) in Karlsruhe, Germany. The audience was presented with a program that included live radio dramas and interviews, alongside the presentation ceremony for the renowned German Radio Drama Award (Deutscher Hörspielpreis). In addition to being aired on radio, the events from Radio Days (Hörspieltage) were broadcast via live audio and video streams on the Internet, and also recorded for later download from the broadcasting stations’ media centers.

The quality standards that the public broadcasters set themselves for streaming productions like this are close to those of their regular productions – but the available budgets for their production are lower. Historically, this would have presented some serious problems but new technical concepts promise a solution to the dilemma, as a test setup at state broadcaster SWR proved during Radio Days. 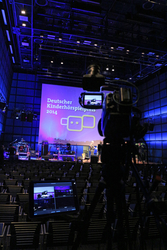 The events comprising Radio Days took place in different venues within the ZKM facilities. For example, the Deutscher Hörspielpreis awards ceremony was staged in the large hall, while interviews were conducted in a lounge that was set up specifically for the purpose. There were four cameras in use, whose signals had to be sent to the control room, together with audio and communications signals. Sascha Schwoll and Wolfgang Goetz (both from broadcasters within ARD) devised a method to achieve this efficiently and in a flexible way. Central to the concept were several Lawo V__link 4 Video-over-IP processors and crystal mixing cores. “With a Lawo V__link4 in every venue, I exchanged all types of signals in and from each venue. The V__link4 was housed in a small stagebox in the venues, together with a crystal core that collected the microphone signals,” explains Schwoll. “We had video with four camera feeds from each venue, plus a program monitoring signal for the camera operators, and audio including the intercom signals and GPIO control signals for the tallies.”

The signals were all collected by the V__link4 and sent to the control room via a single 10-Gbit/s Ethernet connection. “In the conventional way of working, we would have used quite a lot of cables”, says Schwoll. “That would have had us questioning whether the program monitor was really necessary. And for the intercom signals, we would have to set up dedicated intercom units. At Radio Days, this was done by using the crystal console that we have on site to convert the mic signals and to embed the GPI/Os. The intercom is controlled by the InterCom Tool that is integrated in the crystal. We took the audio signal from the camera operators, embedded them into the video signals – and we were done”.

In the control room the signals were received by two further V__link4 units, and sent into a V__pro8. This pro8 functioned as a pre-positioned video matrix, since the video mixer can only handle four video signals. 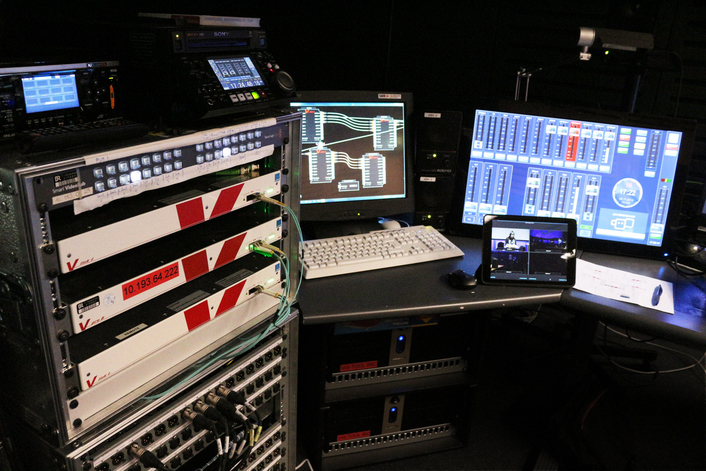 Besides the flexibility, additional benefits became evident when using the Lawo equipment, and these helped to further reduce costs. For example, the quad split out of the V__pro8 was streamed via WLAN to iPads that were mounted in the camera tripods. In this way, every camera operator had a perfect overview of the current pictures, and everybody could create pictures accordingly.  “When creating video streams for smaller productions like this, we simply have different workflows – faster and slimmer than at bigger and more complex productions with OB trucks. When doing a big production, it is common to have rehearsals and every camera operator has his clipboard with the camera schedules on them. So they know exactly, ‘OK, in Scene 1 I film the long shot, and in Scene 2 I do the close-up’. When doing a small streaming production, the lead times are much shorter. Basically, we went into this production without detailed rehearsals or camera schedules. The Quadsplit output that comes with the V__pro8 is really a useful feature. and kept us from having to invest in additional infrastructure.” 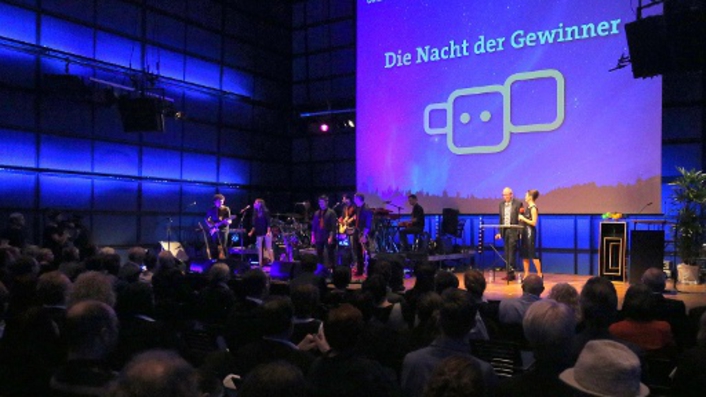 The approach to Radio Days used a test setup that was designed to extend the broadcasters’ experience of this kind of production. After a couple of days in use, the responses were very positive. Sascha Schwoll: “The results are really unbelievable – especially taking into account how little effort we had to use to create this output. Before, results like this would not have been possible – or only by using a lot more resources. Especially during festivals like this one – one hour streaming here, another hour of streaming there, and after that the interview from the interview lounge… and all that with only one team and one set of equipment. So with this system we really get a great scalability at a very good rate. We can deliver a level of quality that compares with our colleagues in the big OB trucks, and that helps us to widen our production portfolio from the huge production to the slim and flexible smaller productions at the low end.