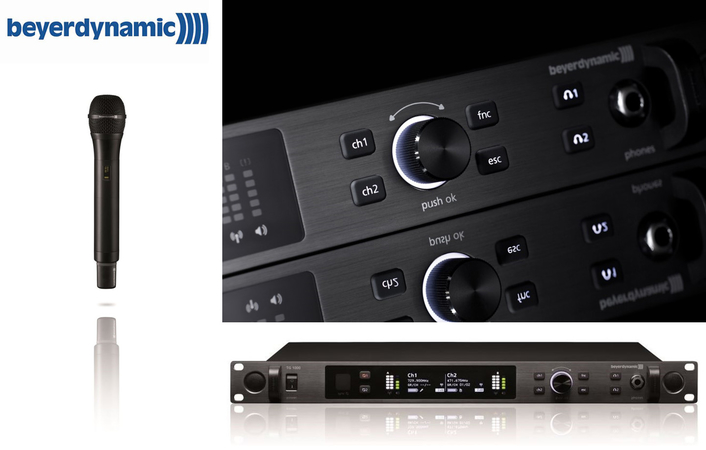 beyerdynamic presents a new digital wireless system. Sounds Perfect. In Every Sense.
World premiere in January at the NAMM Show – German premiere in April at the Prolight+Sound 2013: beyerdynamic, the audio specialist from Heilbronn, Germany, is launching the new TG 1000 digital wireless system at the Prolight + Sound, the leading international trade fair for event technology, which will be held in Frankfurt from April 10th to 13th (Hall 8.0, Stand J21). With a bandwidth of 319 MHz, the wireless system offers a safe long-term solution for everyone affected by the WRC’s new allocation of radio frequencies.

Wireless microphones in town halls, theaters, universities, civic centers, churches, night clubs, businesses and conference hotels could be muted in the future – at least if they transmit at a frequency that has been assigned to the mobile Internet or the new LTE technology. That’s why we need solutions that provide long-term security and can respond flexibly to the upcoming changes in the frequency market. The new TG 1000 is one of the most innovative wireless systems and allows users to look to the future of digital technology with confidence.

No interferences thanks to a huge bandwidth
The regular redistribution of radio frequencies (which is also called a “digital dividend”), the growing number of digital TV programmes and the new LTE mobile wireless technology are forcing wireless microphones into one new frequency range after another. But even in the ranges assigned to the wireless systems, there are more and more problems due to massive disruptions caused by new technologies. As no one can tell quite where the odyssey of wireless devises is going to end, beyerdynamic has developed a digital wireless system for the future.
With a huge bandwidth of 319 MHz, the new system covers a UHF frequency range from 470 to 789 MHz. This provides the advantage of virtually unlimited use in two regards: firstly, it leaves enough clearance to bypass interferences by other users in the assigned frequency range, and secondly, the system’s huge bandwidth enables it to function worldwide.

Exceptional sound and performance
Speeches, rock concerts or opera arias – wireless microphones have to cover a wide range of applications. In order to ensure impressive results for each of them, the technology has to be suitable for speech and singing, as well as instruments.
beyerdynamic’s new digital wireless system with an impressive dynamic range of 128 dB and digital 24-bit converters lay the foundation for high-resolution, professional audio transmission. With distortion-free sound reproduction even in the ultra-deep bass range (20 Hz) and crystal-clear audio transmission, the system will not only impress speakers, but also the most demanding musicians, from classical performers to rock guitarists.

The world's only wireless ribbon microphone
“Speaking of ribbon microphones,” product manager Tobias Sacher is happy to add, “of course our TG V90w ribbon microphone capsule can easily be combined with the new TG 1000 system thanks to the interchangeable capsule concept. The world’s only ribbon microphone whose extraordinary design with a cardioid polar pattern provides an impressive performance even at live concerts on loud stages is now even more versatile. No matter which system is used – whether digital or analogue, wireless or not – now no singer has to do without the natural, silken sound of our TG V90r.” 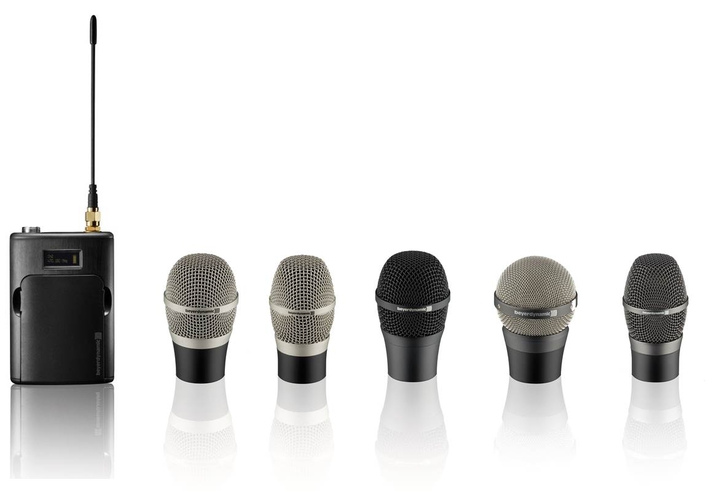 Exceptional user-friendliness
Especially in the first chaotic moments on-stage or backstage, performers have to be able to rely on and operate the technology they need. This is particularly important for users who only occasionally work with a microphone. The TG 1000 system features intuitive one-button navigation, illuminated control elements and a large, high-contrast OLED display.

The new Chameleon software enables web-based control of the system not only with computers, but also with smartphones, tablet PCs, etc.
Professional productions in particular will benefit from the comfortable 24-channel cascading, which allows smooth, interference-free parallel operation of up to 12 dual receivers without antenna splitters.
“With its very wide range, both in terms of frequency and integrated features, the TG 1000 from beyerdynamic is a system that will become established worldwide. It can be used practically anywhere in the world at any indoor or outdoor event,” Ulrich Roth, Head of Research and Development at beyerdynamic, sums up the most important facts.

About beyerdynamic
With a pioneering spirit and the highest quality in demand, beyerdynamic GmbH & Co. KG in Heilbronn, Germany develops and produces first-class audio products. Even today, 88 years after the foundation of the company, premium headphones, microphones and conference systems are developed in Germany and mainly handcrafted.

With the development of the DT 48 headphone (1937), which, today, is still manufactured according to the same technical principle, the young engineer Eugen Beyer laid the foundations for the company’s success. Later beyerdynamic microphones became famous all over the world: The E 1000 ribbon microphone was used on the first Beatles tour in 1966. More and more international and national musicians and bands like Abba, Bob Dylan or Udo Lindenberg used the equipment of beyerdynamic in the seventies and eighties.