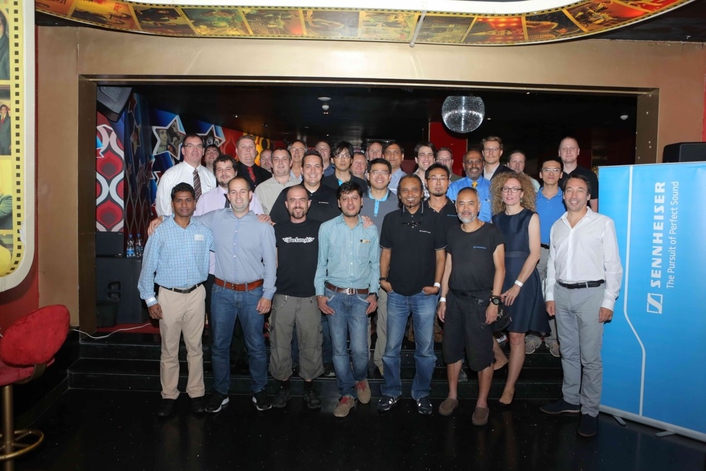 The new Sennheiser RF experts with their mentors
Nine months of hard work have paid off: a total of 19 wireless professionals from the worldwide Sennheiser organisation have been awarded the coveted RF Expert certificate. The last of three on-site training sessions took place in Delhi, and in the meantime the new RF experts have been in action all over the world to provide support for Sennheiser customers and partners in their projects.

“The system of extensive online training and close supervision by mentors combined with several weeks of on-site training has proven itself,” said Kirsten Wessendorf, Manager Sennheiser Sound Academy, summarising the training course. Meanwhile, some of the new RF experts have already completed their first major projects.

Ryan Burr from Sennheiser Middle East provided support for his client Doummar – Q2 Advanced Technology in planning the conference and entertainment facilities for the Sheraton Hotel and Conference Centre in Doha (Qatar). This included carrying out a thorough analysis of the wireless conditions at the location, planning the conference/interpreting systems and the wireless microphone channels, coordinating all wireless frequencies and programming and testing the systems on site.

Ryan Burr: “This project is simply gigantic. Five conference rooms are equipped with ADN-W wireless conference systems with a total of 380 delegate units, while a further six have SR 2020/HDE 2020 interpreting systems with a total of 4,000 receivers. 150 channels of wireless microphones, mostly 5000/3000 systems, are used in the event venues. One room alone has 72 channels! It’s the largest single project that Sennheiser Middle East has ever worked on, and my further training as an RF expert came just at the right time for me.” 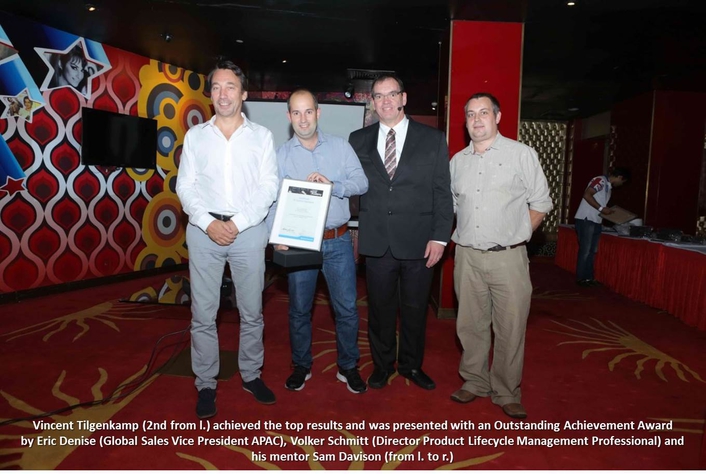 Vincent Tilgenkamp from Sennheiser Benelux has also earned the right to call himself an RF expert. In fact, he even achieved top results in all tasks and was presented with an Outstanding Achievement Award. He can also look back on a number of successful projects, including the hit TV show “Utopia”, devised by John de Mol and produced by Talpa, in which he supported the multimedia company Dutchview by providing a special wireless solution. Dutchview was faced with the daunting challenge of picking up the wireless microphone signals from the reality show participants over an area of 12,500 square metres. Vincent Tilgenkamp and his team succeeded in covering this vast area with a single rack of receivers and a number of antenna distribution combiners that were custom-built for Utopia (link to the report: http://en-de.sennheiser.com/news-utopia-becomes-a-reality-with-sennheiser-wireless).

Tilgenkamp too is delighted with the RF expert course: “I particularly liked the on-site training sessions where we had to solve tricky problems. Our mentors made a lot of effort to manipulate the equipment, introduce all sorts of RF interference and additionally put us under time pressure. For example, they would invite a big audience to a concert and ask us to get the band miked and the RF wireless systems running in virtually no time at all! In the end, of course, the audience was let in on time and enjoyed a top-quality gig.”