Viewers show a keen interest in ads that were relevant to their geographical location, age and interests

Research commissioned by Dynamic Ad Insertion specialist Yospace has revealed that 78% of live online TV viewers are more likely to take notice if ads are targeted and relevant to them personally and that those ads will prompt positive action from audiences.

The research conducted by Censuswide gauges the current appetite and attitudes towards advertising in the online world, and showed that 55% would be very likely or likely to look online for a product from targeted ads and 78% would look in store for a product.

One of the strongest themes from the research, carried out on 2001 consumers from across the UK, showed the demand for personalised advertising is being driven by the digitally-savvy millennials. In fact, four out of five 16-34 year olds said they would take follow up action in response to personalised advertising. Almost two thirds of respondents (64%) said they were likely, to some degree, to click on an advert they like online – the highest percentage was again in the 16-34 year age bracket (on average 76%).

While the appetite for personalised advertising in the live stream was apparent, there was also a strong focus on the technical side and the importance of broadcasters getting the delivery right. When questioned about technical problems with adverts on live OTT channels, one quarter of respondents (25%) said they would consider switching channel and nearly one fifth (19%) said they would think less of the broadcaster if there were technical issues.

One major cause of technical glitches is client-side ad insertion as a delivery method, where advertising content is often delivered in a range of different file formats and sizes, often resulting in annoyances such as freezing, buffering and stream failure. In order to achieve a single, continuous stream, where transitions to and from stitched content appear seamless, it is widely accepted that replacement advertising should be inserted server-side before the stream is delivered to the player. 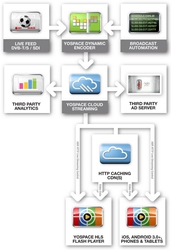 Tim Sewell, CEO, Yospace says: “The results send a strong message to broadcasters that personalised advertising is certainly one of the most effective tools to enhance broadcaster/viewer relationships. It is perhaps unsurprising that the millennials are leading the charge for more personalised and targeted ads. This generation is used to immediacy and taking instantaneous action on all of their digital devices and would certainly react in the same way to live TV ads.

“Live streaming is evolving and many forward thinking broadcasters are already using Dynamic Ad Insertion to deliver targeted and personalised promotions to their viewers. Audiences can now be presented with ads that are customised according to their unique user profile and broadcasters can monetise the live stream to boost their digital revenues.”

Key findings from the research include:
·         88% of people do watch the adverts during live TV at least some of the time
·         Viewers showed a keen interest in ads that were relevant to their geographical location, age and interests
·         The majority of consumers (62%) said they had already taken follow up action after seeing an advert while watching TV
·         More than one in ten viewers rated buffering or disruption caused by bad technology as the most annoying part of adverts