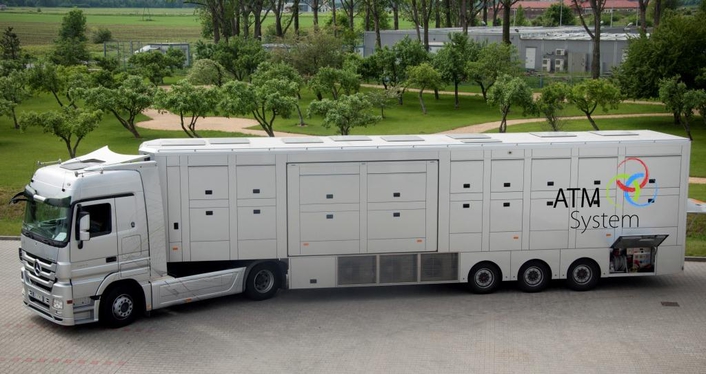 VSM on board with one-stop control solution
Polish production company ATM System has put its new HD2 outside broadcasting vehicle on the road, carrying a high-level equipment specification under the centralised control of a Virtual Studio Manager (VSM) state-of-the-art controller system from L-S-B Broadcast Technologies GmbH.

ATM’s HD2 is an impressive advertisement for Poland’s design and construction agencies which put the vehicle together in less than 7 months. Built by coachbuilder Autokontener, and carrying a full complement of the latest Sony HD cameras, this new OBV is 16.7 meters long and 4 meters wide, with two retractable walls creating an area of more than 45 square meters, allowing 25 people to work in comfortable conditions. System integrator 4 Vision completed the installation, in record time, to a design by Robert Wolter, the chairman of ATM System.

Designed to support SD, HD and 3G production formats, the HD2 OBV is expanding ATM’s working horizons, already taking the company to big 3D projects and prestigious sports events that were outside its scope and technical capability until now. “The biggest selling point of this new vehicle is that it uses the latest technology”, says Dorota Baron, Production Coordinator for ATM System. “As well as the latest Sony HDC-2500 cameras and MVS-7000X vision mixer, we have audio mixing and routing technology from a range of suppliers. All this third-party equipment, in fact the entire OB van, is simply and transparently controlled by the VSM.”

Customised according to the workflow preferences of the ATM System operators, the VSM in HD2 incorporates all aspects of broadcast control, integrating a variety of equipment including a Snell Cygnus video router and Studer audio router, Sony MVS-7000X vision mixer, Axon Synapse converters and multiviewers, and modular devices from Lynx. The VSM uses more than 20x LBP panels and 17x UMDs, plus 2x 32/32 GPIO and 2x 64 GPO interfaces, to provide overall control of switcher, tally, routers and modular devices. ATM’s HD2 OB has a fully redundant system operating on a VSM server cluster, which gives it the maximum stability necessary for high-profile live event broadcast. 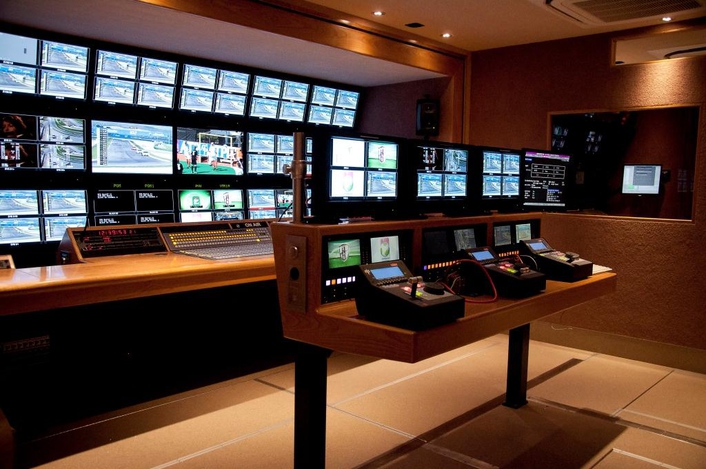 “VSM is a control system very easy to manage”, says ATM System’s Dorota Baron. “It’s simple to change the labels on the UMDs and video mixer, and combine audio and video signals for single button push operation. Settings and configuration of all UMD and LBP panels can be changed quickly online without any up- or download. The big buttons on the LBP panels are very user-friendly and provide a lot of functionality, as for instance the ability to control GPIOs from the panels. Operation of panel GUIs is also possible via software clients from a PC Workstation or even a smartphone.”

The easy and intuitive user interface of VSM has evolved over many years of use in broadcast environments. Behind is a powerful control system which contains an increasing number of protocols to control third-party devices, and so e.g. supports all common routers.

ATM System audio engineer Mariusz Nowak is part of the team that will be using VSM on HD2’s first high- profile projects include Speedway Grand Prix of Poland, held in Torun, and City Challenge Baku, another motorsports event, staged in Azerbaijan’s capital. “For me, there are three important layers of control: the main one is video router control, the second is microphone input gain control in the Sony 2500 CCU, controlled by GPI, and the third is using the red tally GPI, and crossing it to the audio console for Audio-follow-Video.”

VSM is a cost-effective choice for management of mic gain control, compared to options offered by camera manufacturers, or the complexity of handling it manually from the CCU menu. “I don’t want to disturb the work of the video engineers”, continues Nowak, “so it is very important that VSM gives me easy control from my audio booth over the mic gain of all the cameras.”

With the fully integrated and transparent tie-line management VSM also takes care of signal connections across multiple routers and automatically performs all necessary switching in the background. With multi-layer tally logic and control, ATM operators can configure tally management to their preferences or the specific needs of a production, without the need to check and synchronise multiple systems.

L-S-B Broadcast Technologies GmbH is the global leader in advanced audio and video broadcast controls. The core product of the Wiesbaden (Germany) based company is the Virtual Studio Manager (VSM), an IP based overall control system. Since the VSM is able to control all broadcast devices regardless of manufacturer, it provides a flexible and powerful one-stop solution for every broadcast challenge. Together with the configuration software vsmStudio, the VSM makes a variety of hardware and software front-ends available for an unlimited number of users. Thus, complete studios, master control rooms and mobile trucks can be equipped and managed with one single system.
Founded in 2003, L-S-B is a mid-sized company with access to an optimally positioned global sales network. A staff of 35 manages the realisation of projects, service, training, software and hardware development and production at our headquarters in Wiesbaden in the state of Hesse.