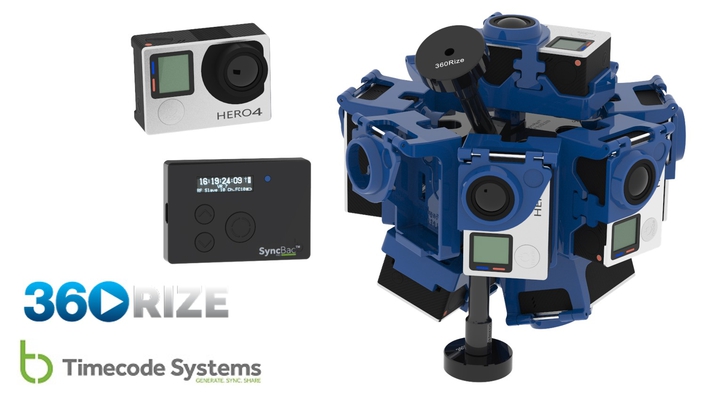 The Most Streamlined PRO VR Acquisition Solution on the Market

The momentum for developing VR technology is showing no signs of slowing down, but there is one thing that has persistently frustrated 360 content producers — the lack of a professional alternative to the time-consuming, manual process of synchronizing multiple streams of non-timecoded GoPro footage. Timecode Systems and 360RIZE recognized that, by sharing and combining their technologies, they could provide a solution that takes the guesswork out of the acquisition of VR content and enables it to be stitched together with increased speed, ease, and complete accuracy.

The latest model in 360RIZE's established and patented VR 360 Plug-N-Play™ range houses between six and 24 GoPro HERO4 Black or Silver cameras mounted with SyncBac PROs in a spherical array. This allows each camera in a VR rig to generate its own frame-accurate timecode, creating the ability to sync multiple cameras wirelessly over long-range, robust RF. VR camera operators can now start and stop recording all day long without the hassle of having to slate cameras manually or disrupt filming to mark takes with audio or visual cues. But the benefits are not just at the point of shooting. At the end of filming, the memory cards from each camera are handed to the edit team, each containing media files stamped with the same embedded timecode. This allows all media to be stitched and aligned automatically for a swift and efficient edit.

"We have been able to achieve so much with the SyncBac VR due to the sharing of technology between our two companies to create a fully integrated VR acquisition solution," said Paul Scurrell, CEO of Timecode Systems Limited. "What we have achieved here is a unique and powerful solution that empowers creative content producers to focus more on artistic elements and much less on laborious practical tasks. To me, this is exactly what best-of-breed technology companies should be doing — taking the best of their own offerings and combining them in a team effort to drive innovation and provide practical solutions that boost efficiency."

However, SyncBac VR is not just about sync; the ability to remotely control multiple cameras in a 360 rig is an equally important benefit of this system. Using a Timecode Systems :pulse to connect each SyncBac PRO unit in the 360RIZE VR rig to the BLINK Hub device control app provides the ability to control all cameras remotely and simultaneously. From one screen on a smartphone, tablet, or Mac™, users can set multiple GoPros in a VR rig to start or stop recording simultaneously. The app also makes it easy to identify low battery on a camera promptly, before it hinders filming, and it is even possible to alter the resolution, frame rate, and other vital camera settings for all GoPros in a rig globally at the single press of a button.

"Whether there are six or 24 cameras in our spherical array, using the BLINK Hub app makes it simple to treat multiple GoPro cameras in a rig as one," said Michael Kintner, CEO and founder of 360RIZE. "We saw an opportunity to use BLINK Hub to take the guesswork out of VR filming by making it easy to set up, monitor status in real time, and control every camera centrally from a single screen. VR content producers are going to love the ability to eliminate errors in camera settings, monitor camera performance, extend battery life, and harness the simple power of grouping sets of cameras to work together as one or multiple 360 rigs. All achieved with no additional firmware. Combined with the ability to timecode sync wirelessly with real-time monitoring, this makes a ground-breaking, wireless control and monitoring solution that fits perfectly into our modular 360 Plug-n-Play product line."

With both companies adopting a modular approach to their products, users have complete flexibility to build the perfect solution for their shoot — whether it's a six- or 24-camera rig. In addition, the same SyncBac PROs used one day in the VR rig can be used the next day to film alongside mainstream television cameras and professional audio in a more traditional broadcast multicamera setup; it's the same professional technology, simply configured in a different way.

At the 2017 NAB Show, Timecode Systems is inviting delegates to join them at booth C2746 to experience this exciting new technology and see how it integrates with their solutions to create the most cohesive VR workflow solution on the market. 360Rize would also like to invite everyone to join them at NAB2017 booth N318VR to see the complete line of 360 Plug-n-Play™ modular gear.

About 360Rize/360Heros Inc:
360Rize a 360Heros Inc., company specializing in virtual reality 360 video technology, creates 360 spherical video camera systems that capture 360 video content as high as 12K resolution VR content. 360Rize also develops 360 video workflow solutions such as 360CamMan™, the world's first VR media management software and many other 360 video work flow solutions. Through years of research and innovation, 360Rize is empowering content creators to push the limits of this emerging technology and its unique modular 360 Plug-n-Play™ product line allows producers to use the action and cinematic cameras in multi-camera arrays or unplug them and use them as they were intended allowing producers to efficiently camera manage their video equipment for multiple purposes.

About Timecode Systems
Timecode Systems designs and manufactures timecode hardware and software solutions that make it easier to capture, log, search, and synchronise content captured during multicamera film and television shoots and 360-degree virtual reality (VR) filming. Whether for filming using one camera in a studio, multiple cameras on location, a whole army of wearables or minicams, or GoPro cameras rigged for VR, Timecode Systems products work together to offer production teams a cohesive wireless workflow solution for syncing video and audio, sharing metadata, and remotely controlling devices via the free multiplatform BLINK Hub app.