Bauer Studios in Ludwigsburg has been among the top addresses in the German recording scene – for over 70 years! All the big names of German-language pop music have recorded here: Udo Jürgens, Reinhard Mey, Herbert Grönemeyer, to name but a few. International stars, too, such as Stevie Wonder, Chaka Khan, Miles Davis, Pat Metheney, and Al Di Meola. It was never a question of pandering to the mainstream. Bauer Studios has earned an excellent reputation for high-quality jazz recordings in particular, including a legendary live recording adored by jazz lovers all over the world:
The Köln Concert by Keith Jarrett

The main attraction of Bauer Studios has always been Studio 1, with an analog Neve console and a live room of almost 2,000 square feet that provides ample space for orchestras and big bands. And for the “Studio Konzert” series, which is recorded live in front of an audience on 2-track analog tape and later distributed exclusively on vinyl – via Bauer Studios’ own record label.

Since 2017, Bauer Studios has been run by a new management duo, Bettina Bertók-Thumm and Michael Thumm. But the founders’ philosophy is continued with great consistency. After all, Bauer Studios has always been characterized by a pioneering spirit. When Bauer Studios opened in December 1948, it was Germany’s first private recording studio. In the late 1950s, Bauer Studios became pioneers of stereophony. So it’s only logical that the possibilities of immersive sound are now being explored.

“We do have a tradition of looking forward,” explains Michael Thumm, sound engineer and managing director. “What is there that goes beyond stereo? What's next? We enjoy exploring new things, and I think that's why we're still around after 70 years.” 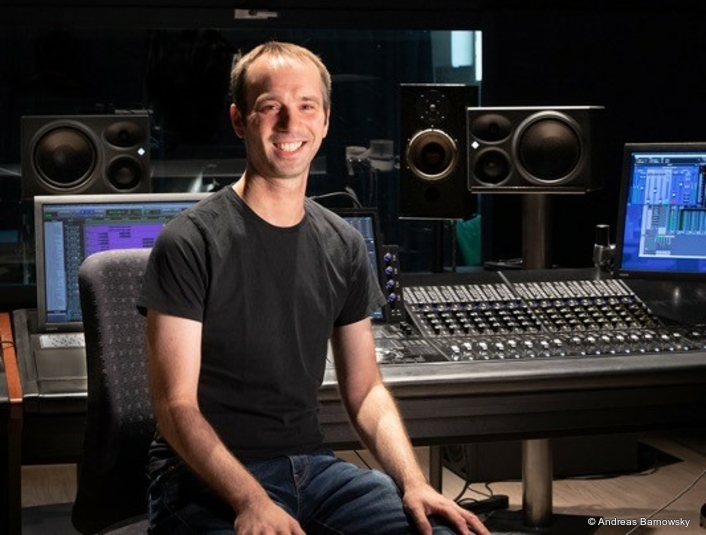 Studio Conversion as an Opportunity for Immersive Audio
Studio 2, which had previously been little used and was past its prime, was to be converted for film sound mixing. At least that was the original idea. Both Michael Thumm and his colleague Bettina Bertók-Thumm had completed their Tonmeister studies at the Babelsberg Konrad Wolf Academy of Film and Television (today: Film University) in Potsdam. So they were very familiar with multichannel formats, as cinema productions have long relied on surround sound – and now increasingly venture into immersive audio formats.

Michael Thumm: “It quickly became clear to us that if we’re building a studio in 2017, it would be stupid not to consider an immersive format. It was a relatively small step to screw four more speakers to the ceiling. With film sound in mind, we made a conscious decision to go with Dolby Atmos, even though Auro 3D played a bigger role for music productions at the time. We figured that Dolby's connections to the movie business would give it a greater influence on the market. And that’s what we see happening now. For example, Universal is having their back catalogue mixed in Dolby Atmos at Capitol Studios in Los Angeles.”

The newly designed Studio 2, optimized by Markus Bertram (MB Akustik), was therefore to be equipped with a monitoring system that supports common surround formats as well as Dolby Atmos. When it came to choosing the loudspeakers, Neumann studio monitors were quickly selected as the first choice. 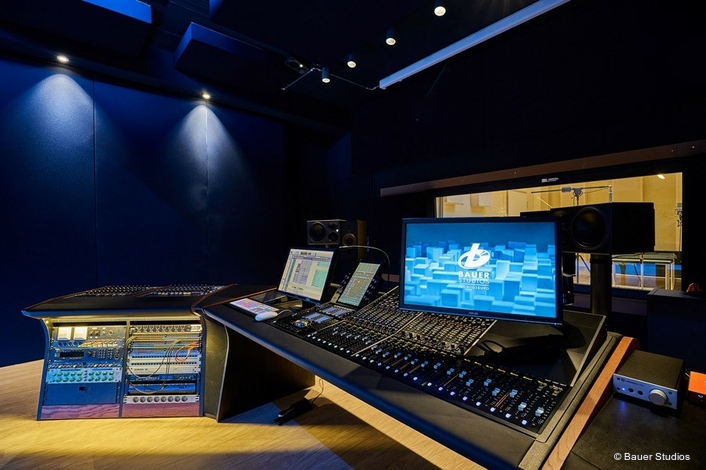 The redesigned Studio 2 is equipped with an Avid S6 console, which also serves as the monitor controller for the 5.1.4 or 7.1.4 setup.

Neumann Monitoring for Maximum Compatibility
“The decision to use Neumann actually had nothing to do with immersive,” explains Michael Thumm. A decisive factor was compatibility with other studios and with their sound engineers’ listening experience. “Neumann monitors were in many TV mix rooms, they were used at the university, and many recording studios are now also equipped with them. We spoke to many fellow sound engineers before we made our decision: What studio monitors do you know? What do you prefer? I personally like the Neumann studio monitors; I have used them frequently and have always been able to achieve great results. Our sound engineer colleagues here at Bauer Studios also agreed on Neumann monitors. Moreover, we also rent out Studio 2 to external sound engineers. We therefore wanted loudspeakers that everyone would feel comfortable working with. Everyone knew the Neumann monitors, and we often heard, 'I’ve got the small ones at home!’ “

The consistent sound image within the KH product line also plays an important role for the monitoring system in Studio 2 because different models are used: “Five KH 310s form the surround circle. If necessary, we can add two more KH 310s for 7.1. The subwoofer is a KH 870, and four KH 80 DSPs are used for the height layer. So it's a 5.1.4 or 7.1.4 setup.” 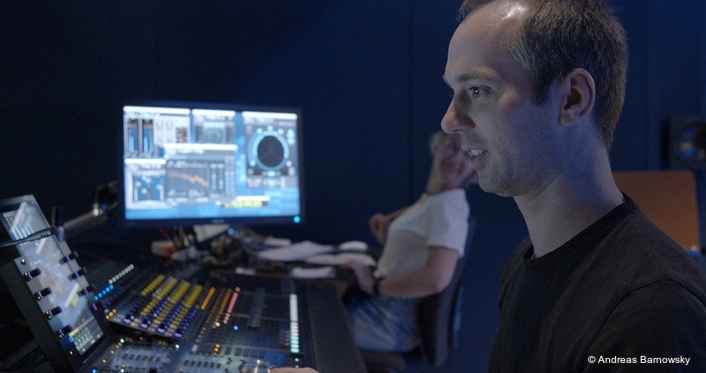 Studio 2 in action: all eight sound engineers were allowed to remix their productions in Dolby Atmos.

New Mixing and Listening Experiences
Among the first productions that used the new possibilities was Wer 4 sind (2019), a film documentary celebrating the 30th anniversary of German rap pioneers Die Fantastischen Vier. “That was natively post-produced in Dolby Atmos. In the music sector, there are requests, but demand is not huge, so far.”

Part of the reason, of course, is the Covid pandemic; many productions couldn't take place. But instead of sinking into depression, Bauer Studios decided to use the time wisely. Michael Thumm: “The opportunity arose for the eight sound engineers employed at Bauer Studios to gain experience in immersive audio. So all the sound engineers remixed their productions in Dolby Atmos. We got to grips with the format, played things back to each other; we discussed our work and had fun discovering: what is possible, what makes sense? We tried out a wide variety of approaches and workflows.”

The result is Freiheitsgrade (“degrees of freedom”), a compilation of productions from Bauer Studios, remixed in Dolby Atmos. The musical spectrum ranges from big band jazz and modern jazz to funk, pop and folk. Unlike many other immersive productions, there is a clear focus on acoustic music.

“It's a huge pleasure to listen to a large body of sound such as a big band in immersive audio, to feel the energy in the room – even for people who actually prefer other types of music,” Michael Thumm enthuses. He sums up his mixing insights as follows: “As a sound engineer, you should enjoy experimenting. What possibilities does the format offer, and what can I do to serve this piece of music? You shouldn't lose sight of the listeners, either; for example, they should notice that there are ceiling speakers. When I’m not mixing to picture, I can give the listener the opportunity to stand in the middle of the band. The space this creates makes mixing easier; I don't have to use as much EQ and compression to fit the music between two speakers. With immersive, I can resolve the arrangement much more finely, present it to the listener in a more transparent way. Moving around this playing field is a great pleasure.”

Of course, the result is also a great pleasure for the listener. Freiheitsgrade will be available mid-September 2021 via the streaming providers Apple Music, Tidal, and Amazon Music. 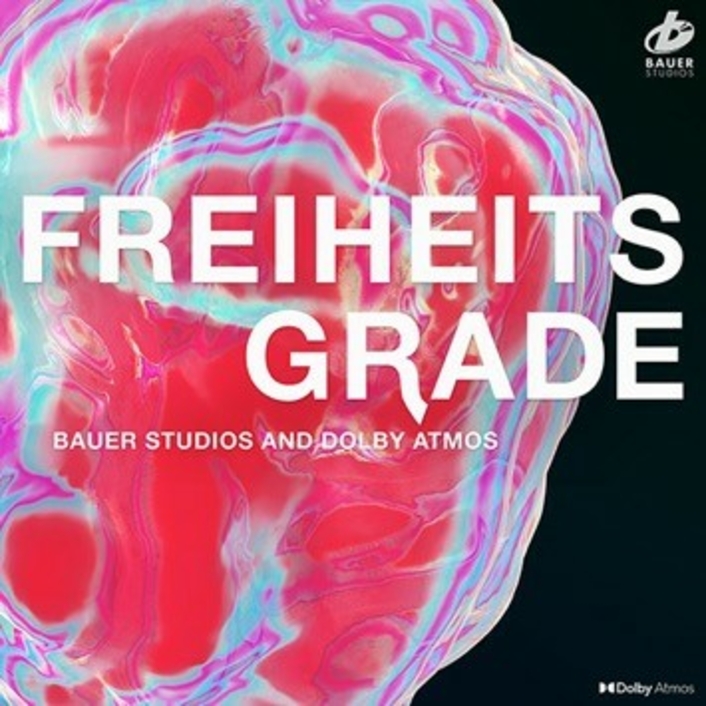 Freiheitsgrade: acoustic music in many styles, remixed in Dolby Atmos

About Neumann
Georg Neumann GmbH, known as “Neumann.Berlin”, is one of the world’s leading manufacturers of studio-grade audio equipment and the creator of recording microphone legends including the U 47, M 49, U 67 and U 87. Founded in 1928, the company has been recognized with numerous international awards for its technological innovations. Since 2010, Neumann.Berlin has expanded its expertise in electro-acoustic transducer design to also include the studio monitor market, mainly targeting TV and radio broadcasting, recording, and audio production. The first Neumann studio headphone was introduced at the beginning of 2019. Georg Neumann GmbH has been part of the Sennheiser Group since 1991, and is represented worldwide by the Sennheiser network of subsidiaries and long-standing trading partners.