“Neumann has been supporting Calrec’s global tradeshow efforts throughout 2014 and this installation is a logical progression of the relationship between the two companies,” explains Nick. “Calrec is a market leader in the broadcast market and Neumann’s KH series is intended for critical listening situations where sound quality, reliability and uniformity are required.

“There is great synergy between Calrec and Neumann, based on providing a user experience at the highest level, whilst providing a host of facilities ideally suited to today’s HD environment and future productions.”

Neumann's approach to speaker design and installation is that of accuracy and measurement. Its KH series reference speakers are objective devices that do not present their own character. 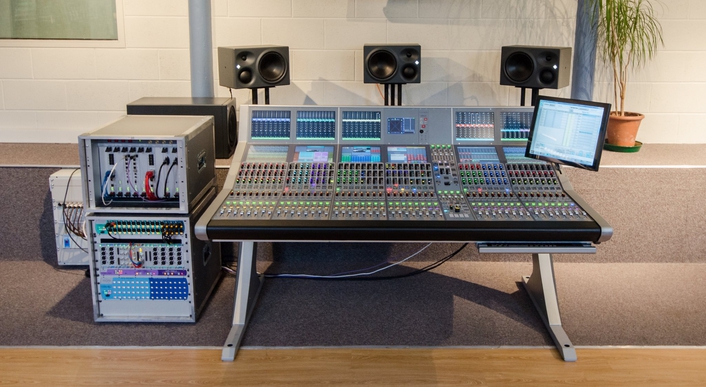 “Neumann provides complete measurement data, which means that clients know what they are listening to rather than having to guess. This is paramount in broadcast,” says Nick. “We are very proud that Calrec trusts Neumann to deliver the outstanding audio of its consoles to its customers.”

“Calrec have been using KH120s throughout this year’s exhibition calendar. They have been highly regarded by staff and visitors alike,” said Ian Cookson, Calrec’s Communication Manager. “Calrec and Neumann’s ethos regarding audio transparency is very similar so we were very happy they agreed to furnish our facility with their speakers. I look forward to working together in the future.”

A Calrec Summa console will also play an integral part in Sennheiser’s support of the Salford International Media Festival, taking place from the 17th to 21st of November at MediaCity UK, where the company will be presenting three seminars: The future of RF in broadcast; Surround sound in broadcast - creating an immersive environment for HD video; and The future! digital microphones.

Sennheiser will have a stand at the conference, showcasing Neumann surround sound loudspeakers and digital microphones, Sennheiser’s Esfera surround microphone system and the Nagra 7 recorder, all interfaced with Calrec’s Summa broadcast console.  The Sennheiser team will offer live demonstrations using the Summa as a high quality hub.

The Sennheiser Group based in Wedemark near Hanover, Germany, was founded in 1945 and has gone on to become a leading manufacturer of microphones, headphones and wireless transmission systems. Sales in 2013 totalled 590.4 million euros. Sennheiser employs more than 2,500 staff worldwide and operates plants in Germany, Ireland and the USA. The company has a worldwide network of subsidiaries in France, Great Britain, Belgium, the Netherlands, Switzerland and Liechtenstein, Germany, Denmark (Nordic), Russia, Hong Kong, India, Singapore, Japan, China, Australia and New Zealand, Canada, Mexico, and the USA. It also has long-established trading partners in other countries. Georg Neumann GmbH, Berlin, a maker of studio microphones and monitor speakers, and Sennheiser Communications A/S, a joint venture making headsets for PCs, offices and call centres, are also part of the Sennheiser Group.