NEP Visions with Wohler Audio Monitors at the London 2012 Olympics 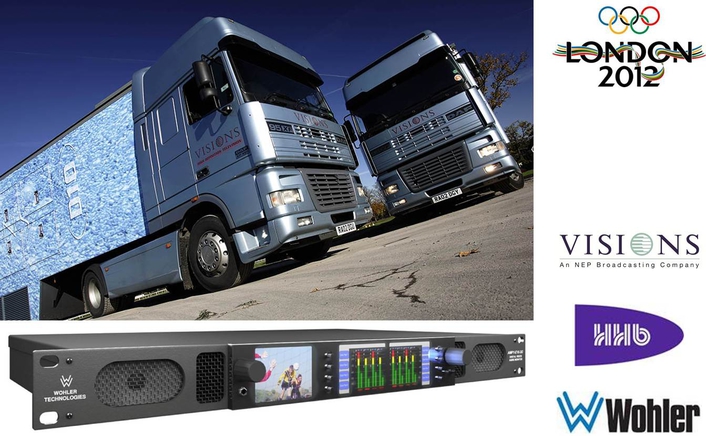 After their first  deployment in flyaway systems at Wimbledon to broadcast matches for ESPN in America, the AMP1-16-M AMUs were installed into two triple expander HD OB vehicles to cover the London 2012 Olympics for US broadcaster NBC before moving on to Sky’s coverage of the next season’s Premier League football.

The AMP1-16-M AMUs enable NEP Visions engineers to select, monitor and meter up to 16 channels of embedded audio from either of two 3G/HD/SD-SDI streams. With a stereo analogue output on XLRs, adjustable volume and balance controls, the AMP1-16-M also features level metering and phase on two bright 2.4-inch LED backlit displays. Configurations can be created, saved and recalled via Ethernet and copied between units via USB.

NEP Visions Head of Sound Paul Fournier explains that he chose the AMP1-16-M monitors for these critical applications because they are simple to read and a compact, lightweight unit that can fit in small working spaces: “Operationally, the AMP1-16-M is very easy to use and the SDI inputs help us reduce the cabling that we would normally need for monitoring 16 channels of audio. We have always found Wohler to make very reliable products and we plan on ordering many more of these units for new trucks that we will build in the future. HHB supplied the monitors quickly and efficiently and were very accommodating along the way. They are my go-to supplier for professional audio products.”

HHB Manager, Broadcast & SI Sales Nikki Kalsi says: “The new Wohler AMP1-16-M is a versatile product with a multitude of features at a very competitive price. It is perfect for OB environments where embedded multi-channel audio is becoming more common place. We have developed a strong and enjoyable working relationship with Paul and the NEP team over many years and look forward to continuing that in the future.”

For over 25 years, NEP Visions has been one of the world’s leading Outside Broadcast providers. From serving as a host broadcaster for The Royal Wedding in 2011 to providing HD flyaway systems in Kazakhstan, NEP Visions covers premier events all over the world and specialises in the latest technological solutions coupled with experienced delivery crews and project management. The Visions fleet is equipped with the latest remote and mobile production options and available for use anywhere around the world.

HHB Communications Ltd.Founded in 1976 and located in London, HHB Communications is a global leader in the supply of professional audio technology. Serving the broadcast, recording and media production sectors, HHB’s unique expertise is also recognised by major manufacturers and innovators, many of which have appointed the company as exclusive distributors of their products. The specialist division, Scrub, serves the needs of the television and film post production industry from premises in the heart of London’s Soho.