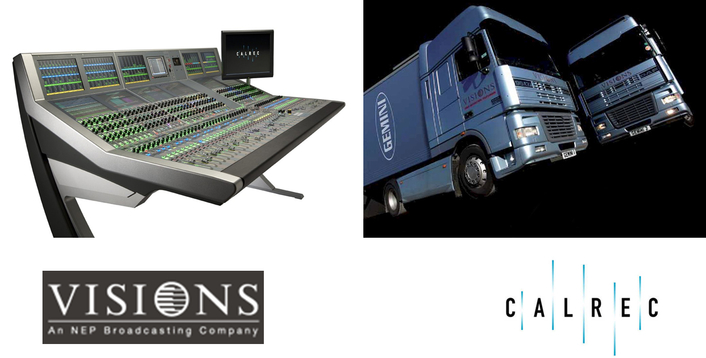 HD ‘Supertruck’ For Sky Sports Will Feature Two 56-fader Apollo Consoles
Calrec Audio has sold UK Outside Broadcast specialists NEP Visions a pair of 56-fader Apollo consoles for a new high-definition ‘supertruck’, designed for Sky’s coverage of Barclays Premier League football. The new truck has two sound control rooms, one to handle pre-match presentations, one for coverage of the matches themselves.

UK Outside Broadcast facilities company NEP Visions has ordered two 56-fader Apollo mixers from high-definition console specialists Calrec Audio. The desks are both destined for a double-expanding high-definition ‘supertruck’, half of a pair currently under construction for coverage of Premiership Football games by broadcaster BSkyB.

Outputting up to 16 discrete broadcast channels of fully embedded audio, the new vehicles consolidate Sky’s current requirement for three trucks at most Premier League games (one to handle the pre-match presentation, one to handle the match itself and one containing all the recording and editing facilities) down to a more energy-efficient two.

One of the new trucks contains all the required recording, editing and transmission hardware with 50 record channels and up to 30 cameras, while the other will look after production of both the pre-match presentation coverage and the coverage of the match itself, with completely separate sound and vision control rooms for each part of the match. Of course, each sound control room will feature one of the 56-fader Apollo consoles.

Explaining the decision to choose Calrec’s Apollo for the new trucks, Paul Fournier, Head of Sound at NEP Visions, quips: “It helps that we’re a ‘Calrec company’ — our parent company in the USA, NEP, is Calrec’s largest Outside Broadcast customer. But there were several other good reasons as well. Sky is installing the Apollo console in its new discrete-channel production and transmission facilities in London, so the Apollo was the logical choice for our new trucks.

“The Apollo also handles MADI easily, which was another point in its favour. Finally, looking to the future, we’re keen to start making use of Calrec’s Hydra networking protocol between our trucks and Sky’s facilities when and where the fibre infrastructure is available, which is another reason to mirror Sky’s choice. Finally, of course, Calrec are a pleasure to deal with, from a professional, technical and personal standpoint!”

Calrec has manufactured high quality audio products to the broadcast marketplace since 1964.Throughout its history the company has focused specifically on the needs of its customers, working closely with them to develop solutions to their problems. Calrec has consistently pushed forward technology barriers to provide comprehensive facilities which meet complex requirements.Proud holders of the ISO9001:2008 standard, the most comprehensive of the ISO9000 international standards in recognition of excellence, Calrec also hold the prestigious Investors In People Award, recognising a continuous commitment to training and development.