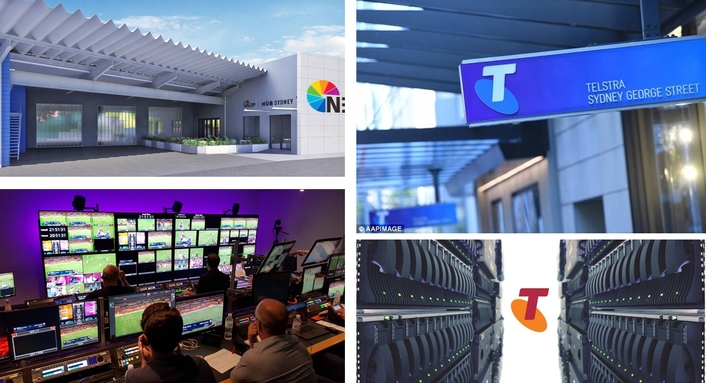 NEP Australia, the country’s leading provider of outside broadcast and studio solutions and a division of NEP Group, and Telstra Broadcast Services, a leading global broadcast services business, have achieved a milestone in broadcast television, delivering the world’s first remote production across the Pacific.

30 HD camera feeds in LA were linked via diverse and hitless 10 gigabyte-per-second circuits on the Telstra DPN, which has recently been extended to Los Angeles, with the production taking place in Sydney, overcoming what until now was considered an insurmountable distance.

The tests confirm that the Andrews Hub control rooms in Sydney can efficiently produce broadcast events held in Los Angeles and, arguably, beyond.

NEP Australia’s Director of Technology, Marc Segar, said: “This is a game-changer for broadcast television, proving anyone can work from anywhere while connected to our network, whether in Australia or on the other side of the planet.

“Our crew at the Sydney Andrews Hub perceived no appreciable difference between covering the trial event in LA and the remote broadcast of a live A-League match from Perth last month.”

Trevor Boal, Head of Telstra Broadcast Services, said: “From the moment NEP approached us about building the Telstra Distributed Production Network to support the Andrews Hubs, we shared their excitement about the enormous possibilities of broadcasting over IP.

“NEP had a clear vision of how distributed production could deliver an optimal commercial and practical outcome, and we wanted to be part of it. As our network capacity and reach continues to grow, it’s conceivable we could traverse global distances uncompressed in just a few years.”

Segar continued: “It’s exciting to think of the options and flexibility our technology offers to the industry.

“We chose to trial HD, however, we could just as easily have trialled 4K or HDR. Our IP and multi-format hub environment is agnostic to format or compression technologies.”

The 60 HD feeds (30 in both Sydney and Los Angeles) encompassed all the automation and control signals.

This makes high definition or UHD/4K over distance viable cost-wise, as there is no appreciable difference in delay compared to uncompressed video.

Round trip latency was only 136 milliseconds, less than 2 frames in each direction.

The successful trans-Pacific trial is just the start of NEP’s extensive program to trial other locations around the world, including Japan and the UK.

Background on NEP Australia’s Andrews Hubs
The Andrews Hubs are the most technically advanced facilities of their scale in the world. Using an internet protocol (IP) backbone and multi-format production capabilities, the Sydney and Melbourne Hubs enable multiple concurrent outside broadcasts. Remote production allows cameras and microphones to be located at the venue, with the majority of the production team based at the Hubs. There, central control facilities can accomodate up to six simultaneous events, connecting with 29 sporting venues via the Telstra Distributed Production Network. This creates considerable savings in crew travel time, as well as efficiencies arising from centralised and inter-Hub resource sharing for everything from equipment through to disaster recovery capabilities.

About NEP
For over 30 years, NEP has been a worldwide outsourced technical production partner supporting premier content producers of live sports, entertainment, music and corporate events. Our services include remote production, studio production, audio visual solutions, host broadcast support, premium playout, post production and innovative software-based media management solutions. NEP’s 3,000+ employees are driven by a passion for superior service and a focus on technical innovation. Together, we have supported productions in over 85 countries on all seven continents.

NEP is headquartered in the United States and has offices in 23 countries.