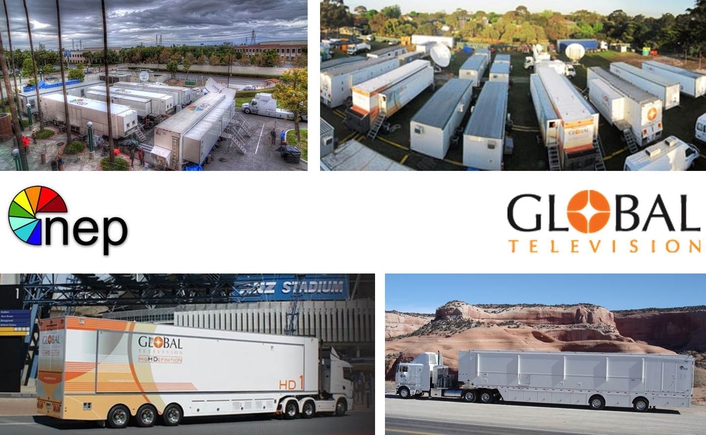 NEP is one of the largest broadcast and live event service companies with operations across the United States, United Kingdom and Brazil, and supporting thousands of events annually around the world. The acquisition of Global Television further expands NEP’s presence into Australia and Asia. NEP is majority-owned by private funds managed by Crestview Partners, with a significant ownership stake held by NEP’s management team.

NEP CEO Kevin Rabbitt says, “Global Television has an outstanding reputation for excellence in live sports and light entertainment and is the clear leader in the Australian television market. Together, NEP and Global Television offer a much broader pool of expertise, resources and facilities and extends NEP’s services worldwide, adding significant value for our clients and partners who work internationally. We are excited to work with Global's CEO Keith Andrews and his management team to continue to grow their business.

“With the support of our private equity partner, Crestview, we have expanded our geographic footprint and established NEP as a worldwide leader in the industry. The Global acquisition is an important step in that process.”

Global facilitates the majority of premium live sport produced and broadcast in Australia, and the most-watched live entertainment programs. Six of 2013’s highest-rating television shows were Global projects, including the top two: the My Kitchen Rules and The Block Sky High winner announcement episodes.

Global has also achieved international recognition for its technical expertise in host broadcasting, partnering with production companies and broadcasters to win major contracts, including the 2014 Glasgow Commonwealth Games and G20 Summit in Brisbane 2014.

Global will remain an independent operating entity based in Australia, led by Keith Andrews and his executive team.

Catalyst Managing Director Trent Peterson says, “Catalyst counts Global among our most successful investments, and we’ve been proud to work with Keith and his managers in achieving that.

“Global’s reputation for excellence is well understood in Australia. It’s a credit to Keith and his team that Global has been acquired by a much larger industry player with the reach and capability of NEP.

“We are especially pleased that Global is now part of an organisation that shares its passion for great television and outstanding client service.”

Global Television CEO Keith Andrews added, “This is a great outcome for Global’s clients, staff and partners. We’ve worked closely with NEP over the last four to five years on various major projects. The two organisations know one another well and I can confidently say we have similar cultures based on providing superior service to our clients.

“On behalf of the Global team, I thank our board of directors and Catalyst for their confidence in Global and their support as we’ve grown the company to its current level. We are all excited about the next chapter for Global Television as part of the NEP family.”