Ncam and The Foundry drive Dreamspace project for virtual production

Project Dreamspace, a three-year European Commission-funded project seeks to explore new ways of integrating real and virtual environments, and is showcasing the results of its work as part of the IBC Future Zone. Central to the project is high precision camera tracking combined with real-time depth capture, provided by Ncam, together with virtual production tools from The Foundry.

The Dreamspace project – which brings together researchers from Germany and Belgium as well as Ncam and The Foundry – is developing new virtual production tools for use in television, film, and other media including art installations. The project’s paper on its initial work has been selected by IBC as one of the eight most important papers of the year to be included in the prestigious Best of IBC and IET publication.

The EU collaborative project brings together some of the best minds from the education, research and commercial sectors, including Stargate, CreW, Saarland University, iMinds and Filmakademie.
The aim of the project is to create a new set of tools for creative professionals, and a production pipeline, combining live performances, video and computer-generated imagery.

The partners have developed virtual production tools that allow the on-set manipulation of 3D digital assets to give a hands-on, dynamic integration of video feeds from tracked cameras. It also allows the use of 360˚ VR cameras and multi-camera rigs for background plates: together with the complete freedom of movement empowered by Ncam’s unique camera tracking technology, Dreamspace users can move freely through any virtual environment they can imagine. 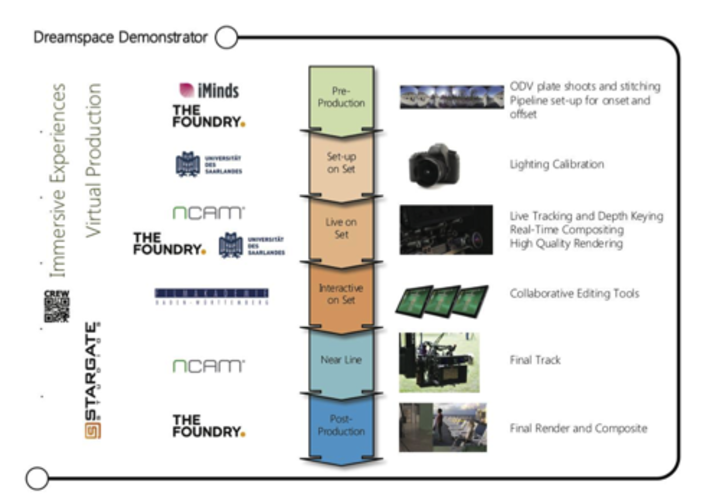 “Ncam’s camera tracking technology is a core part of Dreamspace, as two approaches to live depth capture have been developed using the Ncam camera bar as the only hardware.” said Nic Hatch of Ncam. “We are delighted to be working with some of the industry’s best talent and showcasing with them, state of the art technology at IBC, that will provide the immersive user experience of the future.”

“We are focused on the final render and composite during post production,” said Jon Starck of The Foundry. “In essence, on how to get compositing working live on set as part of production.”
Dreamspace is exhibiting at IBC 2016 in the IBC Future Zone (stand 8.F05).

More of Ncam’s solutions, which provide live virtual broadcast graphics in a studio or on location, and on any camera rig, for news and sports broadcasting will be demonstrated at Vizrt (7.A20), AVID (7.J20) and Brainstorm (7.C12) stands during IBC.

About The Foundry
Established in 1996, The Foundry is a global software company headquartered in London, with offices in Manchester, Los Angeles and Silicon Valley. We make smart software for creative people. But we are so much more than that. We are not just a technology maker or software seller. We are here to empower artists and designers across the world. We develop tools, technologies and processes that enable them to bring their ideas to life faster and more effectively. We believe in a world where people can continually raise their creative potential. We are champions of creativity.