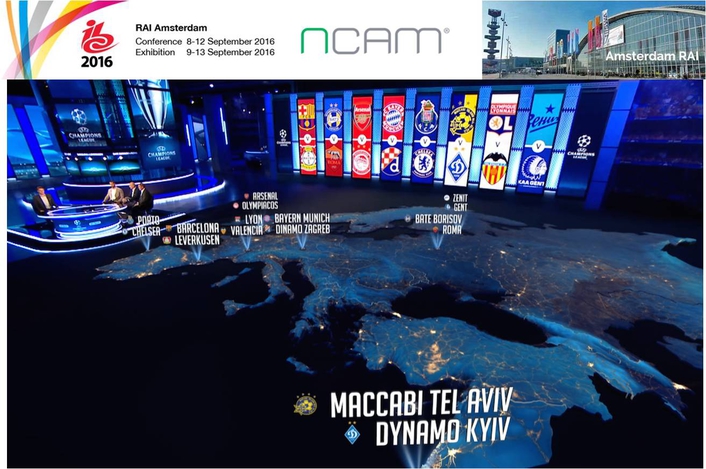 Ncam, global leader in augmented reality for television and film production, has developed a ground-breaking approach to real-time depth keying for augmented reality. The development, which will allow presenters to move freely around and interact with virtual elements in live augmented reality productions, is being demonstrated at IBC2016 (stand 7.F31).

Augmented reality adds virtual graphical elements to real studio or location shoots. Ncam’s camera tracking technology ensures that the virtual elements remain in place however the camera moves. With existing technology, however, the limitation is that live elements – such as presenters – are either in front of or behind each graphic element, and moving around them is extremely difficult and cumbersome.

Ncam has developed depth keying capabilities, so understands precisely how far away from the camera the presenter is. At NAB 2016 this was demonstrated with the Unreal games engine. Now, RT Software has implemented a means of interacting with the depth information in its broadcast graphics engine via integration with Ncam’s SDK.

Ncam and RT Software have already collaborated on some of the most advanced augmented reality applications in the world. The installation at BT Sport in the UK is shortlisted for an IBC Innovation Award for its advances in the use of augmented reality to engage audiences.

One of the uses which BT Sport has for its augmented reality is to have pop-ups of players in position on a football pitch, with the cameras moving around the team line-ups. With the new depth keying technology, presenters would be able to walk between and around the pop-up virtual players as they discussed their capabilities, providing a stunning, direct visualisation of game analysis. This will still provide solid image placement, even with free movement of the camera.

“This collaborative development is a game-changer for augmented reality,” said Mike Fredriksen, commercial director at RT Software. “With Ncam’s tracking we can place complex virtual objects into a scene and be completely confident that they will remain precisely in place, even with random camera moves, even with multiple cameras. Now we can take our users to the next level of augmented reality, where live presenters can really interact with those complex virtual objects – that is a dramatic advance and we are delighted to be leading the industry.”

Nic Hatch, CEO of Ncam, added “Everyone who saw our demonstration at NAB was completely amazed by it, but was wary because it depended on a new and unknown technical platform. RT Software has now added depth capabilities to its standard software, software that many broadcasters already have. This really is a hugely exciting opportunity.”
The new solution can be seen in action at IBC on the RT Software stand, 7.F33.

About RT Software
RT Software is a worldwide leading provider of real time graphics solutions. The product set spans CG, template driven 2D and 3D graphic overlays, election and newsroom graphics, specialist sports graphics and virtual studios. From its beginnings as an off shoot of the BBC 3D graphics Department in 2004, it now has installs from Iceland to New Zealand and includes the BBC, BT Sport, Fox Sports, NBC, Sky Sports and News in the UK, Australia and NZ along with many other Tier 1 broadcasters in its growing customer base.