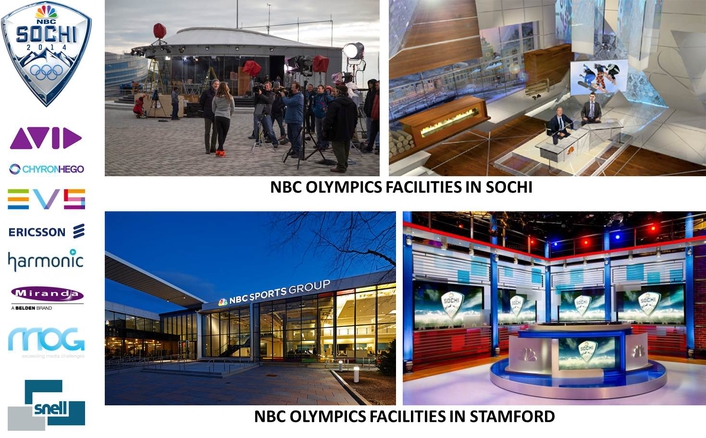 .
The Olympic Games in Sochi provide an example of the growth of “at home” efforts: A centralized production team like Olympic Broadcasting Services (OBS) does much of the camera and event production work, allowing the Rights Holding Broadcasters (RHBs) to concentrate on editing and building story packages. And more and more broadcasters even reduce their on-location staff by increasing the staff back at their home base, making best use of the data-pipelines which now are available from any international sports event location.

One example is NBC Olympics. Already at the 2008 Beijing Games, NBC Olympics has used the large fiber and data pipes to do much more than just backhaul content. The goal has been to give production personnel, no matter where they are located, access to the content they need when they need it and with true autonomy and all located on one media asset management system (MAM). This year, NBC has accomplished that goal: Not only are the two main production centers in Sochi and Stamford (the headquarter of NBC Sports in Connecticut) connected, but all the venue production teams in and around Sochi are as well.

Server and MAM technologies from Avid, EVS, and Harmonic play the key role in both Sochi and Stamford as the FileCatalyst file-transfer platform allows users to search for content within EVS IPDirector and then move files back and forth across the Atlantic.

The team in Stamford includes more than 300 staffers working on everything from logging to creating a number of programs. However one of the fascinating aspects of the system is that, when staffers in Sochi want to find a clip or piece of content, they find it courtesy of metadata input by a logger in Stamford, where events will be logged as they happen. The metadata from the host broadcast, Olympic Broadcaster Services (OBS), is married with the logger’s metadata to provide a complete picture of what happened and what makes it worth using.

While OBS loggers in Sochi deliver the objective metadata, like when the race started, who is racing, and who has won, the NBC loggers in Stamford are adding subjective log notes. Nevertheless the production teams in Sochi are using 41 Avid editing systems and four EVS playback machines at the IBC and additional gear at the venues. And all can use the metadata to begin assembling content for air. About 288TB of Avid Media Grid storage and 85TB of EVS storage are on-site at NBC’s IBC operations, and more than 5.5PB of archived material is in Stamford. 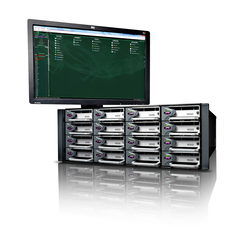 AVID TO PROVIDE ACCELERATED CONTENT CREATION AND MEDIA ASSET MANAGEMENT
In addition to Avid Interplay MAM, NBC Olympics facilities at the IBC is outfitted with Avid Media Composer® and Symphony® editing systems connected to an Avid ISIS® 7000 with 384TB of shared storage system while the Olympic Venues are each equipped with a 64TB ISIS 5000, AirSpeed® 5000, and Interplay Production systems with connectivity back to the IBC.

EVS TO PROVIDE LIVE PRODUCTION WORKFLOW
EVS has more than 70 XT series advanced media production servers in use for NBC Olympics coverage of the Games. Approximately 20 servers are used at the NBC Olympics central broadcast production facility at IBC, and another 30 are used at the NBC production center in Stamford. The remaining servers are deployed at numerous individual sporting venues in Sochi. In addition, approximately 50 EVS IPDirector workstations are implemented in various other locations, providing an integrated suite of video production management applications for complete ingest control, metadata management, on-the-fly editing capabilities, and playout scheduling. Together, the solutions allow the secure and streamlined ingest and management of vast amounts of content from the many sporting venues and the primary IBC broadcasting center for distribution around the globe.

HARMONIC FOR VIDEO INFRASTRUCTURE
NBC Olympics is using the Harmonic solution to support the "highlights factory" in which staff based at the broadcaster's Stamford facility will very quickly access event footage captured in Russia, create highlights clips, and make them available to mobile devices and computers. This wide-area production model facilitates cost-effective content creation by allowing NBC Olympics to maintain a significant portion of its operation in the United States.
Harmonic MediaDeck video servers are recording as many as 25 incoming venue feeds as both XDCAM-HD at 50 Mbps and H.264 low-resolution proxy. These systems are giving Stamford personnel independent control over 60 channels of local ingest. Each recording's proxy is replicated in near real-time on a 480 TB Harmonic MediaGrid storage system connected via two 10-Gigabit circuits to a second 384 TB MediaGrid installed at the Stamford facility. In less than a minute, content created on the Sochi MediaGrid system is replicated on the Stamford MediaGrid system.

The NBC Olympics production staff in the U.S. and Russia has direct access to content stored on either MediaGrid system through the MAM system, even if the event is still in progress and the files are still being received. Once recordings begin, dozens of loggers, producers, and editors in Stamford are accessing the material, excerpt what they need, and make highlight files. Using extensive live logs and stats, scoring, and timing information embedded as metadata, editors are able to make shot lists that can be quickly and automatically conformed in proxy resolution for streaming along with live multiscreen services, or conformed in high resolution for use in NBC Olympics' traditional broadcast edit suites in Stamford.

Integration of the MediaGrid into NBC's EVS workflows, with EVS IPDirector devices directly mounted on the MediaGrid, are extending and pooling the storage capabilities of the EVS systems. From any IPDirector seat, NBC Olympics’ personnel have immediate access to footage from any venue, from any day of competition. An LTO-5 library in Stamford makes it easy for production staff to access and use content from previous Olympic Games.

MOG TECHNOLOGIES FOR CENTRALIZED INGEST SOLUTIONS
With access to a full range of automated solutions for File-Based MXF Conform, Re-Wrap, Digital Delivery and Real Time Playback, NBC Olympics ensures great interoperability between all the platforms and media formats used in the coverage of the Sochi Winter Games.

The broadcaster is taking advantage of mxfSPEEDRAIL F1000 capabilities, to conform the captured clips from Harmonic MediaDeck 7000, splicing the disparate clips together and re-wrapping the finished product into a new MXF OP1a. The output is then rapidly delivered to the multi-platform distribution servers. The system enables the handling of growing files, saving time to the editors, when sending their EDL’s for conform, merging sub-clips from several LongGOP sources.

The fully interoperable system is integrated with Avid Interplay MAM, which handles the distribution and load-balancing of conform jobs, and Harmonic Media Grid storage, offering a high traffic performance and a great interoperability between platforms.

MIRANDA TECHNOLOGIES FOR SIGNAL PROCESSING, MONITORING AND CONTROL SOLUTIONS
Miranda Technologies, has been selected to provide a wide array of Densité modular signal processing, iControl control and monitoring solutions, and Kaleido multiviewers to NBC Olympics. NBC is using Miranda's solutions to help manage and prepare the huge number of signals the IBC is receiving from the various venues. Using Miranda’s new Streaming Media Encoder (SME) card, NBC creates a closed-circuit IPTV monitoring system to view critical signals from any location equipped with an IP or WiFi connection, giving easier access to more members of the broadcast team. The production of NBC's telecast, as well as feeds provided for all of NBCUniversal networks and worldwide partner broadcasts, will be managed using a series of Miranda infrastructure components, including the Densité XVP-3901 up/down/cross converter. Broadcast signal feeds are expertly controlled by NBC operators using critical information powered by Miranda's iControl automated monitoring Kaleido multiviewers.

Kaleido-X units are used to drive displays in multiple environments, including the Operations Center, control rooms and monitoring rooms, while Kaleido-X16 and KMV units are used for other applications, such as smaller-scale monitoring workflows and for providing thumbnails for web streams. Additionally, the new SME-1901 streaming media encoder is used for convenient confidence monitoring throughout the broadcast center.

CHYRONHEGO LYRIC PRO-POWERED MOSAIC XL GRAPHIC SYSTEMS
12 state-of-the-art graphics systems are enabling NBC Olympics to bring high-quality graphics to its coverage of the 2014 Sochi Winter Games. Phillip Paully, Director Graphics Engineering & Operations, NBC Olympics said, “We are pleased to be using the ChyronHego, Mosaic XL with Lyric Pro. We are confident that this combination will help streamline our workflow. The use of all solid state drives and an improved operating system will definitely increase our playback speed and reliability.”

SNELL ALCHEMIST STANDARDS CONVERTERS ARE UTILIZED
NBC Olympics is using the Snell system for frame rate conversion from 50Hz to the 59.94Hz U.S. television standard. In all, NBC Olympics is using 25 Snell converters, the majority of which will be Alchemist Ph.C-HD units. Of these, several are outfitted with the FileFlow option to enable seamless input and output of broadcast file formats. As NBC Olympics brings coverage from Russia to the viewers in the United States, Alchemist Ph.C assures that the images viewers see maintain the sharp clarity and detail that help to make sports broadcasts so exciting and engaging. 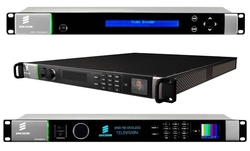 ERICSSON FOR CONTENT DELIVERY SOLUTIONS
Ericsson provides a range of its video processing solutions and advanced modular receivers, enabling NBC Olympics to deliver high quality, reliable HD broadcast to millions of American viewers. NBC Olympics also benefit from Ericsson’s specialist engineers, who, in addition to assisting with equipment/system set-up, will also be onsite 24/7 to provide multisite support for the event.