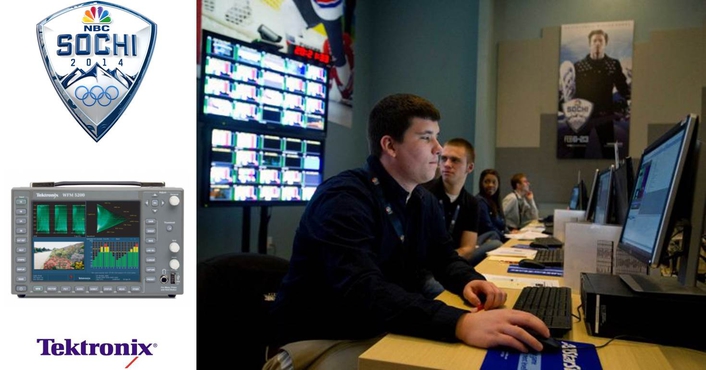 Tektronix Video Test and Network Monitoring Equipment to Enable NBC Olympics to Ensure Signal Quality and Integrity
Tektronix has been selected to provide video test and network monitoring to NBC Olympics, a division of the NBC Sports Group, during its production of the 2014 Olympic Winter Games in Sochi, Russia, from February 6-February 23. The announcement was made by Terry Adams, Vice President, IBC Engineering, NBC Olympics, and Eben Jenkins, General Manager, Video Product Line, Tektronix.

Beginning with the production at the sporting venues in Russia, Tektronix will provide WFM5200 and WFM7200 Waveform Monitors for on-site camera set up, and verifying gamut signal quality and integrity. NBC Olympics plans to backhaul the contribution quality feeds through several service providers to their facilities in the US. To verify the compressed video signal quality at each end of the transmission, NBC Olympics will use Tektronix Sentry family of Video Quality Monitors which have the unique ability to detect QoE artifacts on hundreds of IP video streams on 1G and 10G transmission paths.

Tektronix General Manager Eben Jenkins added: "Tektronix has a long history of partnering with NBC Olympics and is honored to be given the role of helping to ensure the highest possible video quality for viewers of the Olympic Games.”

Adams said: “We are pleased to be working once again with Tektronix, and we are confident that their video test and network monitoring equipment will ensure that all the feeds we are bringing into Sochi and sending home to the USA will meet the exacting standards of quality our viewers have come to expect.”

NBC Olympics will further use additional WFM5200 Waveform Monitors in their U.S. facilities for production, post-production and broadcast operations before playing to air. Finally, NBC will use the Sentry Video Quality Monitor at the Cable Network Operation Center (NOC) to monitor the quality of the satellite uplink feed.

About Tektronix
For more than sixty-five years, engineers have turned to Tektronix for test, measurement and monitoring solutions to solve design challenges, improve productivity and dramatically reduce time to market. Tektronix is a leading supplier of test equipment for engineers focused on electronic design, manufacturing, and advanced technology development. Headquartered in Beaverton, Oregon, Tektronix serves customers worldwide and offers award-winning service and support.