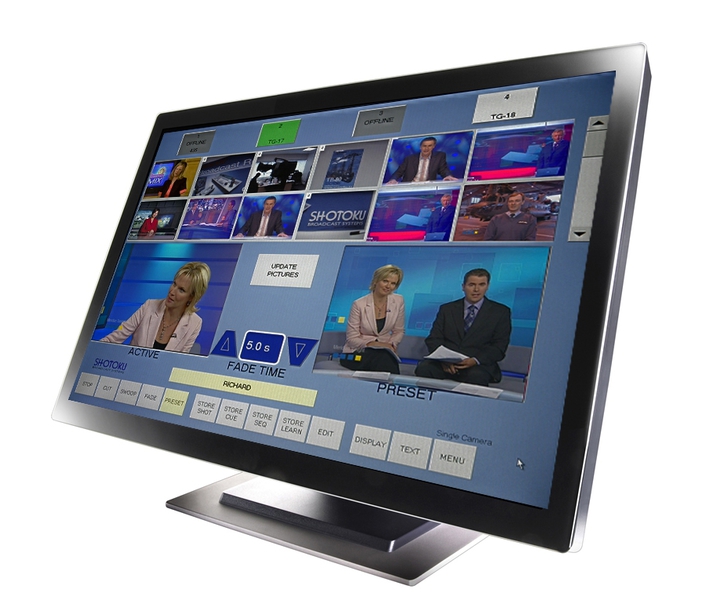 Danny Popkin, BBC Studios and Post Production Technical Development Manager said: “The Virtual studio area, which covered approximately one quarter of the Studio One floor area at Television Centre, had a number of challenges that made it impossible to use conventionally mounted cameras to obtain the specific shots required by the director. These camera positions were obtained using slung remote pan and tilt heads with touch screen control for shot selection. The TG-27 heads with integrated VR tracking technology meant they could be fully integrated on the large VR set we used for presentation of the live election data.”

Paul Flook, Head of Broadcast Engineering, ITN added that “We have been using Shotoku control systems for our daily national news broadcasts on ITV, so we knew we could rely on the system to meet the demands of our live through-the-night Election 2010 coverage.“

TR-T control system uses an intuitive user interface with thumbnail video images representing numerous stored shot positions. The highly configurable screen layout enables complete control of all cameras in the system in a way that best suits the operator and the program format. True multi-camera support allowing simultaneous on-air quality movement of up to 16 cameras is supported by all Shotoku systems. A distributed architecture and a simple, resilient, Ethernet control network means that even the most critical live broadcasts can rely on the system to provide the best possible performance at all times.

James Eddershaw, Sales Director Shotoku Broadcast Systems said “We are obviously delighted to be have been involved in both the BBC and ITN 2010 Election programmes. The UK election coverage this year was, even more than usual, a very high profile broadcast demanding the highest level of performance and reliability.”

Shotoku Broadcast Systems is an international leader in the manufacture and marketing of a full range of camera support products with emphasis on manual and robotic pedestals and pan/tilt heads for the television broadcast industry. The Company also provides robotic camera systems capable of interfacing with third-party equipment. Established as an engineering design firm specializing in advanced mechanics and electronic control systems, Shotoku maintains headquarters in Japan with offices in Staines, UK and Torrance, CA. The Company’s robotic camera systems are designed, developed and manufactured in Staines, UK. For further information