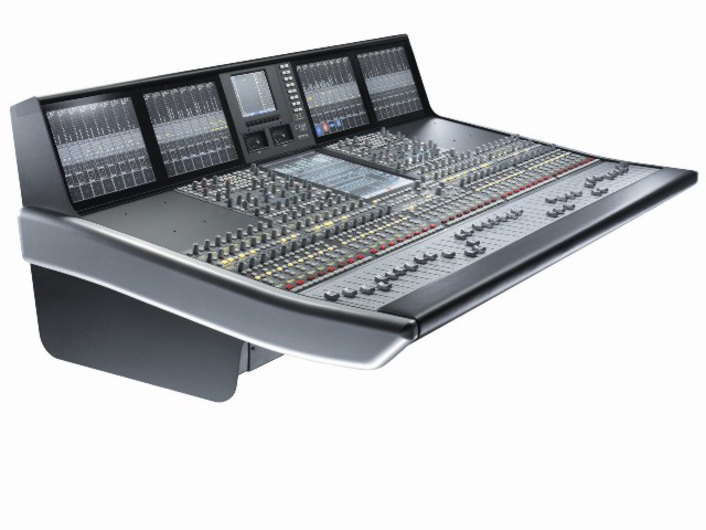 SSL C100 HDS
CHARLOTTE, NC– NASCAR Media Group (NMG) has installed a 32+8-fader Solid State Logic C100 HDS digital broadcast console and MORSERouter to accommodate the need for HD workflow in a new studio build out. NASCAR Media Group creates and produces broadcast programming and home entertainment video related to the sport and provides the technical and production services for everything NASCAR including several series and specials for FOX, CMT, SPEED and SHOWTIME. The C100 HDS is used on programming favorites Inside NASCAR and NASCAR Now.

“We thought the SSL C100 HDS was the best choice as our new studio is seeing national attention through the production of highly visible and widely distributed programming,” says Dave McKinley, Director, Broadcast &Production Operations and Engineering for NASCAR Media Group. “We needed a console that was easy to use and dependable, but also flexible enough to support fast change outs from one show to another. Since February when it was installed, the C100 HDS has operated perfectly.”﻿
The C100 HDS resides in Control Room 43 to support Studio 43, named in tribute to The King of NASCAR, Richard Petty, as he drove that number car most of his career. The console will also support the smaller Studio 3, named in tribute to The Intimidator, Dale Earnhardt Sr. As the production schedule for both studios runs at racetrack speeds, the flexibility of the C100 HDS shines.
“We really appreciate the console automation snapshots and recall of setups to support different shows,” continues McKinley. “The programs we produce typically have complex setups, so we are not awarded a lot of turnaround time. With the C100 HDS, we can change around our program settings in a few minutes and even have time to test the setup.”
NMG is currently using the C100 HDS straight to air, but for tapings it records ISO channels to AJA Ki Pro drives and also into a FORKsystem, that allows post production editing on its Fairlight and Final Cut systems.