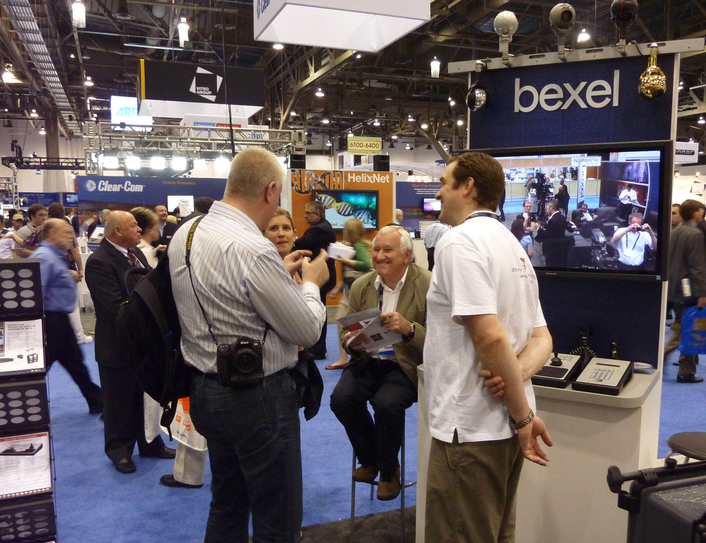 NAB 2010 saw the introduction of the correspondingly ultra-compact Mini Joystick Control unit, developed for applications such as commentator-camera control or for outside broadcast vehicles where desk space is often very restricted. Up to five Q-Ball cameras can be operated from a single Mini Joystick Control station.

"The Camera Corps section of our NAB show booth generated a high level of interest throughout all four days of the exhibition," comments Jerry Gepner, Chief Executive Officer, Services Division, and President of Bexel, Camera Corps' US distributor/rental house. "Q-Ball's combination of HD imager, 10:1 zoom optics, infra-red capability and high-precision motor drive packs a huge amount of creative potential into a very small space. Its compact dimensions and customisable aluminium casing allow the Q-Ball to blend into practically any background or to become an eye-catching feature of a modern studio set. This is an ideal solution for multi-camera HD point-of-view shooting without sending production budgets into orbit."

"The Q-Ball is a great advance on other equipment in the ultra-compact sector of the broadcast robotics market," adds Jim Richardson, Director of Sales at Bexel and leader of the Bexel rental network. "It enables producers to get images from locations that were hitherto impractical or even impossible and increases the efficiency of individual camera operators by allowing multiple remote Q-Balls to be operated from a single panel. This opens up great possibilities both for location and studio shooting. Camera Corps' Mini Joystick Control, debuted at this year's NAB, can be operated purely by feel which is essential when working with fast-action live content."

"I would like to thank our Bexel colleagues for helping to make NAB 2010 the most successful show in which we have ever participated," adds Camera Corps founder and Managing Director Laurie Frost. "The proximity of complementary exhibits from other companies on and around the booth helped attract exactly the kind of programme-makers and broadcasters we were hoping to meet and in very good numbers."

Bexel is the pre-eminent worldwide provider of broadcast services including video and audio equipment rentals, fibre services, new audio sales, used equipment sales, and repairs/maintenance. Bexel provides brilliantly designed and flawlessly executed systems and solutions to all customers – including producers of the biggest and most important televised events in the world. For more information visit