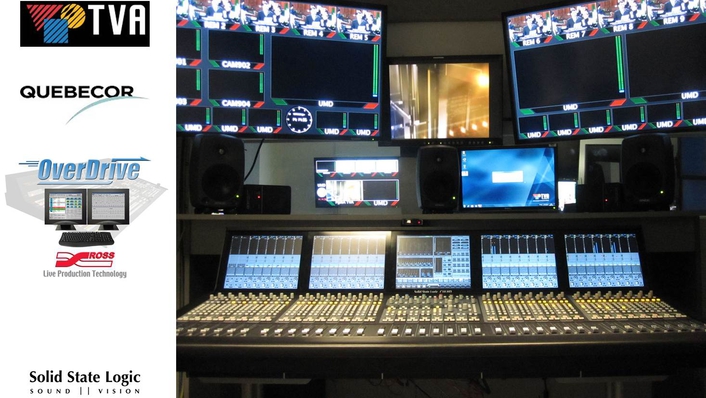 “The plan for upgrading our control room infrastructure includes using Ross Overdrive, so we needed a console that was compatible,” says Anthony DuBoyce, Director of Planning for TVA. “The station has had a very successful history with SSL consoles – the five existing control rooms are equipped with SSL – so it made great sense to continue that relationship. The three control rooms receiving the C10 are new multi-function rooms that will be run by either the Overdrive system or an engineer – or both – giving us maximum flexibility.”

The C10 in Control C, is up and running and working well with the Overdrive system. The newly launched TVA Sports Channel news production is serviced by the C10 in Control C to broadcast game coverage and news about UEFA Champions League soccer, Ottawa Senators hockey, Toronto Blue Jays baseball and Ultimate Fighting Championship (UFC) events. TVA Sports has also acquired national French-language rights to Canadian Hockey League and will serve as the official broadcaster of the Montreal Impact when it moves to Major League Soccer in 2012.  It also is the official French-language broadcaster for the Toronto Raptors basketball games.

The Dialogue Automix enhancement for the C10 is employed for panel-type pre- and post-game shows and programs like Esprit d’Equipe de Sport, a sports news program, and Salut Bonjour, a morning variety program.

“The Dialogue Automix function is critical for the way we produce a panel-based program,” states Bernard Rouette, System Designer for the projects. “Because we use engineers that multitask, having the console provide individual level control, while maintaining a steady ambient sound, saves us time and yields a more consistent sound.”

“We are installing an SSL MORSE Router in Control LCN to handle all the incoming external, satellite, stage/regional station and video server feeds to give us the power to share all of that audio facility-wide from one location,” concludes DuBoyce. “This capability is very important to us and further justifies our choice of the C10 HD console.”