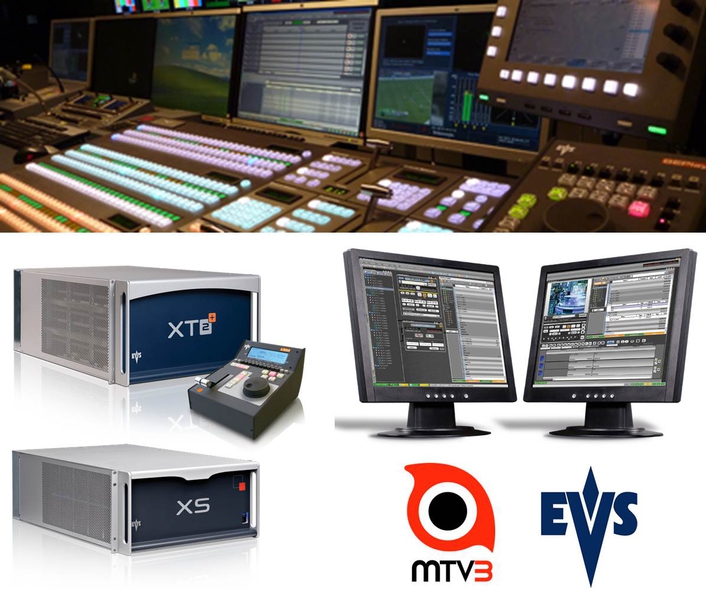 The entire production workflow is controlled by IPDirector, EVS’ content production management tool
MTV3, the Finnish commercial television broadcaster that is part of the Bonnier Group, has chosen EVS integrated systems, including 44 HD server-channels and advanced content management tools, for the implementation of a central ingest and production infrastructure.

For its numerous sports programmes, among others the live coverage of Formula 1, the World Rally Championship and the English Premier League, MTV3 has decided to put in place a newly integrated production and playout workflow using EVS’ advanced hardware and software systems as a backbone solution. Sports content is recorded in HD on a cluster of XS and XT2+ production servers. The entire production workflow is controlled by IPDirector, EVS’ content production management tool, which is used for feeds ingest scheduling, metadata management, media browsing, as well as exchange with Final Cut editors and transfer to a 60 TB SAN. All Apple editors are equipped with an EVS FCP export plug-in interface, allowing them to instantly export their edit to any selected EVS server for playout. Material transferred by the editors is immediately made available for playout control by IPDirector operators and the automation system, even while the export operation is still running.

Based on the open architecture of the EVS systems supporting all standard protocols, some of the XS channels are configured for playout under Harris automation. Playout can be also managed from the IPDirector stations in the control rooms for studio programmes. And thanks to XNet2, the EVS high bandwidth media sharing network, all feeds in record or existing content can be easily and instantly traced and made available for playout throughout the entire network.

Markku Ryöti, Head of TV-Technical Planning & Operations at MTV3: “Within the past year, we have acquired many new rights for MTV3, MTV3 MAX, but also Canal+. Consequently, we needed a flexible system that helps us to manage material during simultaneous recordings. We conducted tests with our former XT2 server and noticed that the file management and sharing of material between the EVS system, Final Cut edit stations and Harris automation worked efficiently”.

Ilkka Tommila, Technical Producer at MTV3: “EVS provided us with a complete solution, from ingest to playout, which integrates impeccably with existing systems and facilitates the move to a tapeless HD production. The architecture of the technology is also very flexible, which allows us to easily adapt to various and constantly evolving production needs”.

The systems integration was managed by TV Tools, which is currently helping the Finnish production company Blue Media to implement a similar HD workflow based on EVS XS/XT2+ servers and IPDirector content management systems. Given that MTV3 outsources certain productions to Blue Media, the setup will be combined with MTV3’s equipment to form a collaborative production system.

Julien Fraipont, Sales Manager Scandinavia for EVS adds: “We are very pleased that MTV3 has selected EVS for its new central ingest and production platform. I am confident that our integrated solutions will allow MTV3 to streamline its day-to-day operations and be more efficient in providing top quality live and near-live coverage to its viewers”.