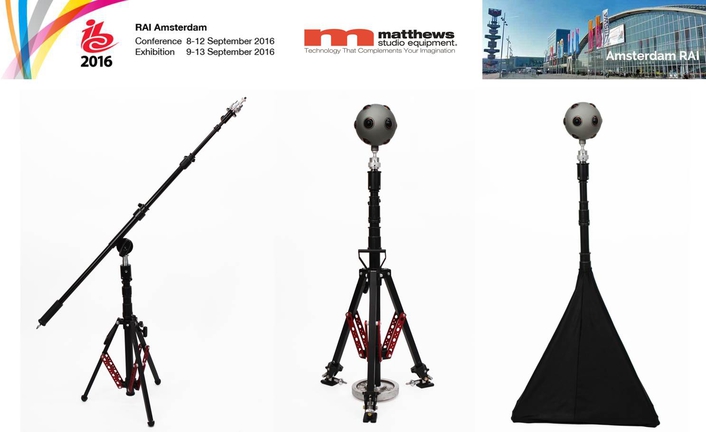 Matthews Studio Equipment known for creating innovative state of the art Technology That Complements Your Imagination for the entertainment industry has entered the VR world – big time. Putting their half-century of knowledge for designing grip equipment to work, they have created the VRig, the first professional grade camera support systems that is specifically designed for VR capture.

“By their very nature, spherical cameras see everything and are often left unattended amidst the action,” says Tyler Phillips, Vice President Marketing and Product Development for Matthews Studio Equipment. “They require a strong support system that is unobtrusive to the camera view, and can be easily painted out in post.” The VRig’s ultra-small footprint minimizes nadir hole and shadow obstruction, yet, like all MSE equipment, will maintain rock solid stability assisted by its low center of gravity barbell weight retainer that works with standard or Olympic style weights. There is also an optional suction Pump Cup for non-porous surfaces and an Auger Spike for exterior locations to further enhance stability.

To provide VR viewers with an immersive experience at live events, for example, the spherical camera is often positioned front row and center of the action. It’s essential that the camera and rigging remain inconspicuous and minimize the obstruction to the live audience. “With discretion in mind, we designed the VRig with a slim vertical riser and equipped it with a Black Elastic Leg Skirt, allowing camera accessories to be concealed from view,” adds Phillips. Integrated tapped female mounts for lighting fixtures and microphones are also included to help address the rigging challenges of a spherical environment while still remaining inconspicuous.

The MSE customer inspired design of VRig makes it more than just a stand, it’s a spherical camera support system. Its robust aluminum construction is uniquely modular in construction. And it isn’t just for live events. VRig is a multi-tasker, ready to capture VR for every entertainment platform. It can be reconfigured as a low-angle mount for a car, tabletop, ground, etc., or with an optional Boom Arm can provide mounts with extended positive and negative angles.  The VRig also integrates seamlessly with standard grip equipment to allow the creation of custom built rigging.

“The VRig is in use on several major VR productions,” says Phillips. The word from shooters – excitement. They finally have a solid support specifically designed for spherical cameras. “Until now they have been kluging together supports from parts using everything from video tripods to still photo monopods and light stands,” he adds. Built for VR, MSE’s VRig makes the workflow faster – seeker design means less expensive rig removal in post.

“Operators also tell use that they are able to set shots quickly, yet not be afraid to walk away from their rig and hide from the camera view. Plus, the flexible, modular construction means that in most cases it’s the only support they need to carry, regardless of the of the location,” Phillips adds.

MSE is a 45-year-old manufacturer of industry-specialized hardware, camera and lighting support. Its equipment is being used on entertainment productions and in major studios in over 90 countries around the world. The company has been honored with two Presidential “E” Award for outstanding contributions to growing U.S. exports, strengthening the economy and creating American jobs. Matthews has also been honored by the Academy of Motion Picture Arts and Sciences and the Academy of Television Arts and Sciences for Technical Achievement. MSE offices are located at their state-of-the-art manufacturing facility at 4520 West Valerio Street, Burbank, CA 91505.