MPEGIF Master Class “Getting Ahead of the Game” 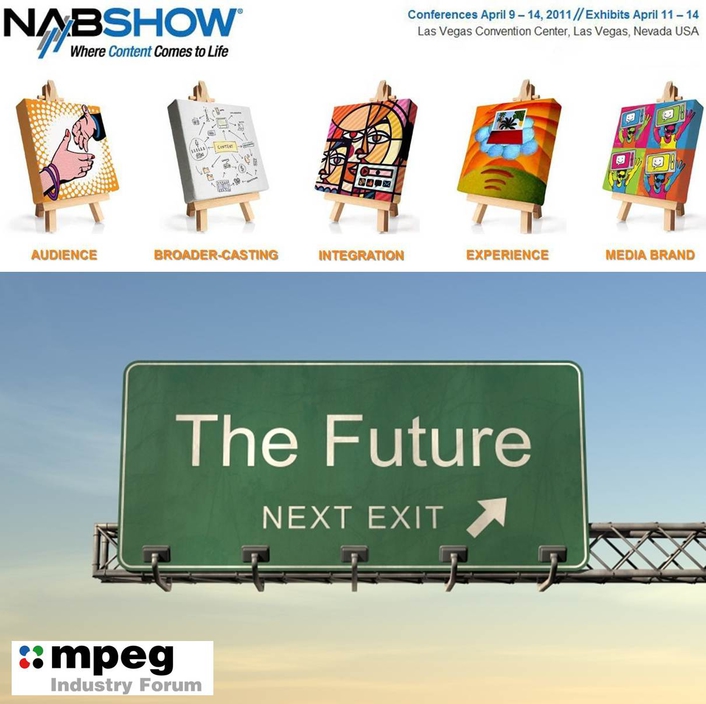 “How to stay relevant in the TV Landscape of Tomorrow”
The MPEG Industry Forum (MPEGIF), the world’s largest advocacy group for standard’s based digital television technologies is presenting its latest MPEGIF Master Class titled “Getting Ahead of the Game”, to be held at NAB 2011 on Monday, April 11th between 1:00pm and 5:00pm in the Las Vegas Convention Centre (S220). This most recent edition of the long running, successful Master Class series well known from NAB, IBC and CES in previous years will bring together an exceptional mélange of industry experts and leaders engaged in next generation digital television, multimedia and video entertainment.

Over the years, the MPEG Industry Forum has worked aggressively to bring clarity to the industry’s vision of the future and to advocate for the adoption of standards that accelerate that clarity. This year at NAB the task has become more important than ever as new technologies create new opportunities to make (or lose) money. The 2011 Master Class at NAB is focused around two areas, Will Broadband be the delivery mechanism of future television, and what makes commercial sense in the future. The MPEGIF will bring technologists and leading executives from operators and content owners from around the world to discuss these new opportunities and to share their experience and perspectives.

“A tremendous amount of engineering and financial resources have been invested into new media and video technologies on all fronts from content creation to delivery to consumption. The result is a standard based and driven multiscreen ecosystem, which now stands to deliver an exceptional viewing experience and respectable returns” said Prof. Dr. h. c. Sebastian Moeritz, President of MPEGIF and Professor at the St. Petersburg State University for Film and Television. “Broadband is a fantastic way of reaching viewers combining technological maturity with innovative progress.”

"The advent of the connected TV has meant that web delivered video is now in reach of everyone”, said David Price, Vice President of MPEGIF and Vice President at Harmonic Inc. “Cable, satellite and telco TV operators are having to expand their offering beyond their walled garden and by embracing Over The Top television are now able to offer a "walled farm" to provide a massive array of unicast content delivered over the Internet directly to the TV".

The MPEG Industry Forum is an independent and platform neutral not-for-profit organization representing more than 30 international companies and organizations from diverse industries with the goal to facilitate and further the widespread adoption and deployment of MPEG and related standards in next generation digital media services. It provides a forum to exchange information and views on technological, economic and regulatory issues that are relevant to these services. It also provides a powerful industry voice advocating the adoption of standards and consolidating the direction of the industry in the time of transition from analogue to digital television and media services.MPEGIF, has played a significant role in facilitating the widespread adoption and deployment of MPEG-4 AVC/H.264, the Emmy-Award winning video compression technology. MPEGIF offers interoperability testing, a conformance program, marketing activities and is present at international trade shows and conferences.