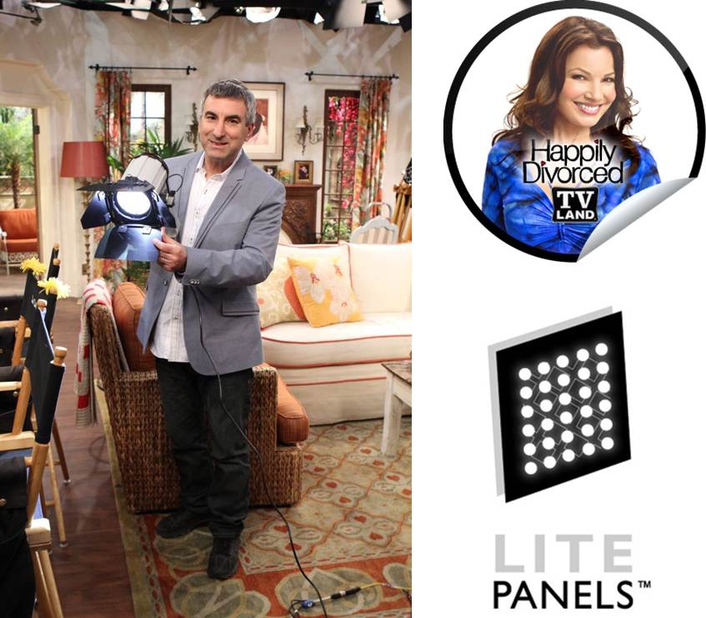 The MiniPlus has gotten Mooradian out of problems
Multi-camera comedies are traditionally lit from beds or pipes above the set to facilitate actor and camera movements during often challenging shoots before a live audience. “I really treat ‘Happily Divorced’ as much like a single-camera as I can, depending on set ups,” says Director of Photography, George Mooradian, ASC.

“Lighting starts with the basic hang on pipes, but much lower and three-quarter position. We have grid cloth on the fronts and streaming sunlight through the panelled windows. Our bounce fill is minimal. And, at the beginning of this season, we added a non-traditional multi-camera lighting source: LEDs.” But not just any LEDs, Mooradian chose a variety of fixtures from Litepanels®.

In the past, when the ‘old’ technology was prevalent, LEDs were considered too expensive or a luxury,” he says. “But since Litepanels entered our stage and workflow, they will now forever be part of our lighting vocabulary. They simply do things better and more efficiently for applications than past methods or current LED alternatives. I will want them for all applications when the line expands.”

Each light has its place on this series. “The Sola 4s simply amazed us,” Mooradian says. “It felt like a scene out of 2001, in the beginning where the apes all gathered around the black obelisk and pondered its invention. No one had seen a light like the Sola 4. Its lightness, smoothness of operation, coolness to the touch, organic beam, ease of use for flood and spot, as well as the modernity with DMX control and power options. In our low-key, low-footcandle world we use the Sola 4s as a nice punch through windows for that splash of depth and as a good bounce light into foamcore to light up a hallway in the club house set. The electricians love to handle it – it feels like a Lexus.”

Mooradian says that the Bi-Color 1x1 took everyone by storm. “The electricians became very protective of them,” he laughs. “These lights literally revolutionised our approach to the ‘TV in the room’ effect. In the multi-camera genre the television seems to always be on, which makes for a complicated lighting situation. When creating the television’s light, you have to eliminate reflections and prevent the cameras from stumbling all over your lighting effect. Otherwise the light placement could end up ‘in the rafters’ and coming from the wrong direction. Then you have the colour temperature issues with a need for both cool and warm tones, requiring two or more lights. With the Bi-Color’s slim profile, adjustable colour balance and various settings controllable by DMX, we have the right tool for the job. We hide the 1x1 fixture in front of the television, low on a beaver board, and set the sequences and frequencies for the whole gamut of colour temperatures from the coolest Arctic to the warmest Baja sunset – big spikes, subtle dips, erratic – and it’s so easy to adjust almost instantly.”

Litepanels’ smaller MicroPro™ and MiniPlus™ (“car-kit” and “little brick,” as Mooradian calls them), have also become invaluable on the show. “Of course, we use the ‘car-kit’ in the car,” he says. “They give us a realistic light, are easy to conceal, and we get any colour temperature we want. And, on a multi-camera set, I can hide them from the four cameras poking into all the windows. Thank you Litepanels for being able to take off the battery! They are never seen – and our director has gone nuts because now he is able to shoot all four angles at the same time!”

The MiniPlus has gotten Mooradian out of problems, “by the seat of my pants,” he laughs. “We’re in a bar shooting over a TV, seconds away from rolling, and the black TV in the foreground didn’t separate from the background. We needed a fast solution. In comes the ‘little brick’, battery-powered, self-contained. Dial-in colour, stick it on a C-stand and voilà – we had the perfect ambiance glow raking up the television for that sheen, which would have looked good in any situation from a five million to 200 million dollar production.”

Mooradian admits that Litepanels fixtures are unusual for multi-camera day-to-day work. But he’s sold – and so is the production. He says they bring authenticity to his cinematography. “By getting these lights into smaller and smaller places for better angles of light, I feel I get a more cinematic look,” he explains. “It helps with the genre, mood and atmosphere. There’s fall off so it doesn’t beat up the walls and instant on/off control to mimic the actors’ gestures. And when I see the Litepanels on Fran’s face, I also light up because it looks and feels right.

“These lights work fast and efficiently,” he adds. “Our crew stores them either in their offices or under the bleachers, but can instantaneously implement them when needed. Their lightweight and low profile saves our backs, and you can go in any direction with the power, corded or self-contained, with no ozone depletion or carbon imprint. The producer and our still photographer are just gaga over them. They know.”

This is George Mooradian’s second season on “Happily Divorced”, which is based on a true story from Fran Drescher and Peter Marc Jacobson’s life. It is set in Hancock Park where, after 18 years of marriage, Peter comes out, but they still live together in different parts of the house. “Happily Divorced” airs on TV Land at 10:30 PM on Wednesdays.