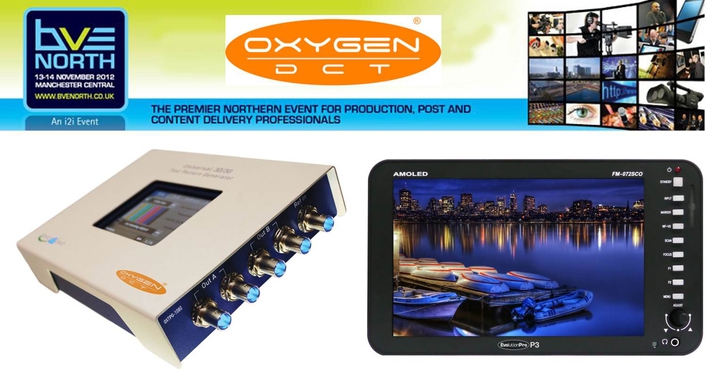 As part of the company's highly successful Evolution Pro P3 production monitor series, this latest introduction has the largest OLED screen (7.67"), the highest resolution display with 1280x800 pixels and widest colour gamut of 110% thus achieving premium level status. Whilst it has exceptional features and facilities it is priced highly competitively at £1721, which is 35% lower cost than other equivalent models available today.

New for BVE North are two ultra-low cost monitors – one of which comes with ultra-high quality HD/SDI inputs.

“With Evolution ProFlex monitors we are giving control rooms and galleries access to professional grade monitoring, thus negating the need to use large domestic televisions that don’t offer the same level of picture quality,” says Steve Hathaway, Oxygen DCT’s Managing Director. “This new monitor range is flexible and capable of being driven by multi-viewer systems with between four and 64 signals on a single screen.”

There are seven different sizes in the range, from a super 9.7” to a high performance 10 bit, 1.06 billion colour 55” model and an enormous 70” screen.  Unlike consumer screens, these monitors are a consistent ergonomic design that will not change model or design as occurs in the consumer market. They also have broadcast colour reproduction with adjustable colour controls, contrast and backlight setting allowing broadcast users to colour match panels together.

Each screen is equipped with the latest, high performance LCD panels and low energy LED backlighting. ProFlex monitors are designed to be flexible with control from either rear mounted buttons or a plug-in remote control panel. DVI and HDMI inputs are standard whilst 3G-HD-SDI is optional.

At BVE North, Oxygen DCT will also be showing its powerful and feature-rich 3G 2-channel test signal generator that offers all the analysis tools engineers need in a highly portable, hand-held unit.

The OxTPG 1000 offers the full range of High Definition standards including 3G and HD/SDI up to 1080p resolution. While ideally suited to all film and broadcast applications, its portable nature makes it particularly well suited to those working in an Outside Broadcast environment with DSNG vehicles and fly-away units. By taking advantage of new technology, the unit is also significantly lower in price than many of its competitors.

“The OxTPG 1000 is the lowest cost high performance TSG on the market and comes with a selection of moving test patterns to test links and monitor performance,” Hathaway adds. “Users can also personalise the unit by loading their own test patters.”

The OxTPG 1000 features a variety of output modes including SD/SDI, HD/SDI and 3G/SDI test signals. Audio is incorporated within the test signal output and users can also Genlock the unit to a master reference. Optional fibre optic links can be supplied with the OxTPG 1000 should these be required. The unit can also be powered by an on-board battery, making it even more useful and versatile.

As Cinedeck’s leading European distributor, Oxygen DCT will also be showing the new 4-channel Cinedeck MX multi-channel recorder. This compliments the latest v3.5 versions of the Cinedeck RX Broadcast and RX Cine/444, and the Cinedeck EX.

Oxygen DCT will complete its BVE North line-up with a host of monitors for broadcast and production and a range of studio glue products including the GlueBox™ Mio HD/SD-SDI to HDMI/DVI converter, a high quality, compact, reliable video conversion and interfacing device for broadcast television and digital film industries.