MOG to Be Present at BroadcastAsia 2014

Visit MOG at booth 5L3-05
MOG technologies, the worldwide supplier for both centralized ingest solutions and MXF development tools will be exhibiting for the 4th year at Broadcast Asia, from 17 to 20 June 2014. Broadcast Asia is a meeting point for Asia-Pacific and Middle-East markets and an important event for MOG to showcase its complete range of centralized ingests solutions.

At booth 5L3-05, visitors will have the chance to put their hands on the most innovative centralized ingest solutions and learn more about how MOG is providing broadcasters with the required fast-turnaround of contents on the migration for HD and tapeless systems.

mxfSPEEDRAIL is an unique and intuitive technology that covers the most popular broadcast technology and formats, reducing costs and saving resources with its service-oriented architecture. 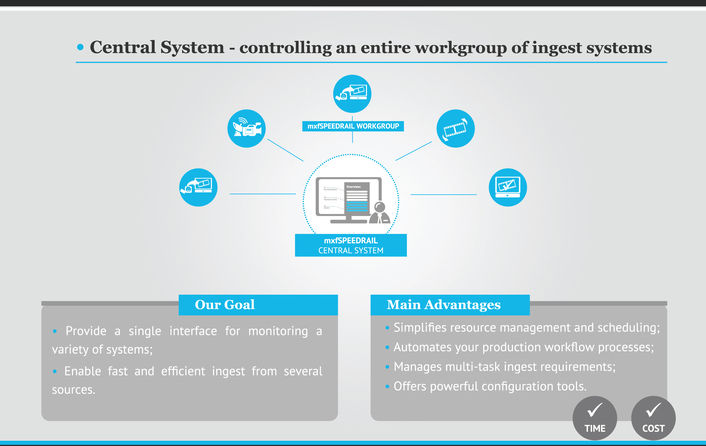 ·    Central System: a new platform able to access all of your ingest units through an intuitive, practical interface that delivers a superior level of management and control. mxfSPEEDRAIL systems can be controlled and monitored simultaneously from a centralized, cutting-edge interface that offers hands-on control of an entire workgroup of ingest systems.

·    Complete, Compact and Mobile Solution – Ensuring all of your Broadcast workflow needs!: The Multi-Camera Mobile Studio is a turnkey solution that allows you to store up to 12TB (up to 380h XDCAM HD 50Mbps) and support up to two editors (including AVID Media Composer, Adobe Premiere and Final Cut Pro) and eight SDI input and output channels. Built with mxfSPEEDRAIL Xpress units, the Multi-Camera Mobile Studio lets you configure your ingest services according to your production needs, by choosing from 9, 12, 15 or 18 Rack Units. Moreover, you can choose between capture, playback, file conversion and transcoding services, all within the same server unit.  Now that’s superior flexibility!

About MOG
Based on open industry standards and offering state-of-the-art technology, MOG has been establishing itself in the market as the worldwide supplier for both Centralized Ingest Solutions and MXF Development Tools. For over a decade, MOG has been helping worldwide broadcasters and technology providers to increase the overall performance of its workflows while migrating for file-based environments, ensuring high interoperability between systems and formats.