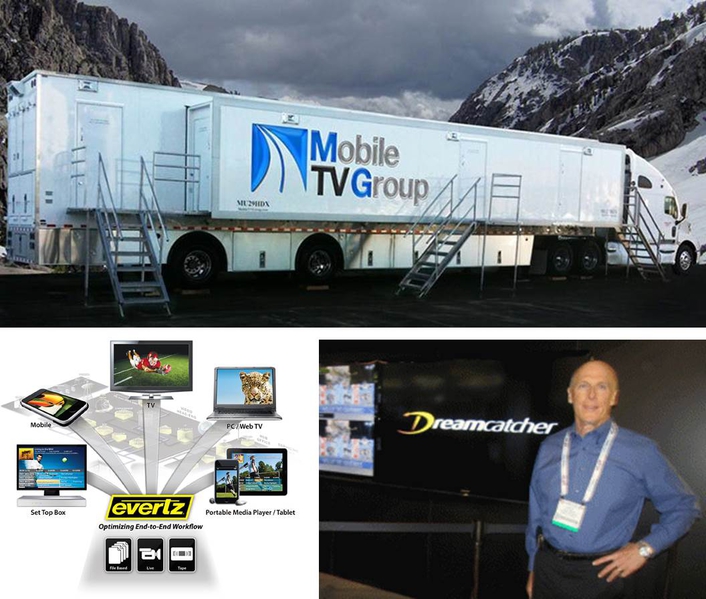 Philip Garvin, GM of MTVG, visits Evertz’s NAB Show booth following the announcement of MTVG’s purchase of the Dreamcatcher
After a series of successful test runs with CBS Sports, Fox Sports, and MLB Network, Evertz has made a sale of the much-anticipated Dreamcatcher replay system.

“We are always looking for technology that enhances the viewer experience,” says Philip Garvin, GM of Mobile TV Group. “We think Dreamcatcher will provide new kinds of replay and 4K segments that will transcend anything that’s been available in the past.”

The excitement around Dreamcatcher — which was first announced at last year’s NAB Show and was further discussed at IBC 2012 — lies in its capabilities as a 4K production tool. Its “super-zoom” capability allows broadcasters to zoom in on key plays and extract an HD image from the larger 4K frame, providing perfectly visible images of close plays on the field.

Over the past few months, Dreamcatcher was used in the 4K-production workflow in several high-profile sports events, including CBS Sports’ AFC Championship and Super Bowl XLVII telecasts, Fox Sports’ Daytona 500 coverage, and MLB Networks’ coverage of the World Baseball Classic.

“CBS Sports has used it during the NFL season as part of their Hyperzoom technology,” Mo Goyal, director of product marketing, Evertz, said at the company’s press conference on Sunday. “What they are able to do is use a 4K camera and then zoom in to a few replays. In fact, in one of the games, we turned over a touchdown based on a review with an angle that we had.”

In addition, Dreamcatcher’s Mosaic feature allows multiple angles to be synchronized and played out at a single button press, offering production teams the ability to show the captured event from new perspectives.