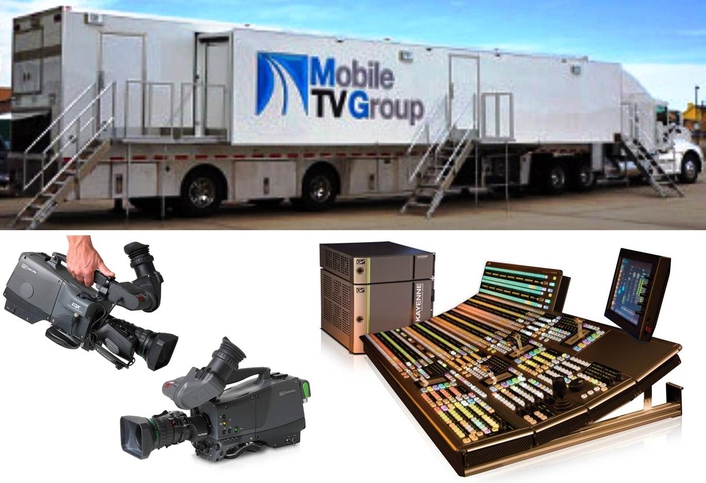 A triple-feed truck is designed to produce three distinct productions from a single event. Home shows will be produced from the usual 100-display production area in 33HDX, the visitor's telecast will come out of a three-bench production room in VMU33, and a third feed will come from the traditional dual-feed room of 33HDX. A triple-feed truck can also accommodate Spanish language feeds and pre/postgame shows.

“33HDX will have a lot of firsts for Mobile TV Group to better serve our customers,” said Philip Garvin, General Manager for Mobile TV Group. “The 11 LDX Première cameras will be the first of the LDX Series cameras in our fleet and we can’t wait to start using these advanced cameras. Teamed with the Grass Valley Kayenne with K-Frame, we’ll also have our first triple-feed truck. Until the Kayenne with K-Frame, a triple-feed truck wasn't practical because it needs more than two control panels,” We need at least three control panels and enough mix-effects buses so that all three feeds have the M/E power they need to do a quality show. Grass Valley made the triple-feed 33HDX and VMU33 possible.”

One of the primary benefits of Mobile TV Group's triple-feed system is that it requires a shorter set-up time as venue video and audio sources need only to be connected to one truck (33HDX), rather than two or three. Distribution to VMU33 will be through dedicated trunk lines. The resources of a single production switcher, routing switcher, and intercom system are shared.

“This new triple feed truck is a great example of how we are enabling our customers to produce more, high quality content from a single event,” said Tim Thorsteinson, President and CEO of Grass Valley. “33HDX showcases the flexibility and image quality of our new LDX Series Cameras along with the power and flexibility of our Kayenne Video Production Center. A few years ago, the production power of an 8 M/E switcher was unheard of, but Kayenne makes up to 9 M/Es—possible, with multiple suites. This brings an entire new way of thinking about how live programming is produced. And it’s the reason Kayenne is called ‘The World's Most Powerful Switcher.’ Grass Valley is proud to help Mobile TV Group empower its clients to simplify the way live content is produced and delivered across multiple platforms.”

33HDX and VMU33 are currently under construction and are expected to hit the road in May 2013, covering Fox Sports West's telecasts of the Los Angeles Clippers, Angels, Dodgers, and Kings, and the Anaheim Ducks.

Grass Valley will be exhibiting at the National Association of Broadcasters (NAB) show in Las Vegas from April 8-11, 2013, in the South Hall lower level, booth SL206.