Johannesburg based MJ Event Gear was the first South African technical production and rental company to commit to purchasing Robe’s BMFLs with 24 x BMFL Spots delivered via distributor DWR shortly after the product’s launch two years ago.“They are very bright, powerful and reliable,” say MJ’s MD and founder Mike Jones, who has invested steadily in Robe moving lights over the years as the company has established itself as one of the SA market leaders.

“All the lighting designers were enthusing about them, so we reckoned it was a good move,” confirmed Mike.

Shortly after this, Christ Embassy Church was organising a large event at Johannesburg’s Dome venue with kit provided by MJ for which they also purchased 38 of their own BMFL Spots and Blades!

After the Dome show, these were stored at MJ for a while, used on another major show in Ghanaian capital Accra, then moved to the brand new LoveWorld Convocation Arena (LCA) CE church building in Lagos, Nigeria.

MJ’s BMFLs have worked on a steady flow of shows over this time including the 2016 Metro FM Music Awards at Durban ICC with lighting designed by Francois van der Merwe.

They are so bright and feature packed, that the optimum number for most corporate events is around 4 – 6 units, which has enabled them to service several shows simultaneously and have great impact on all of them.

Kurt du Preeze is a well-known lighting designer and regular MJ collaborator who uses BMFLs at every opportunity and also lit the two CEC shows mentioned above. The Dome event was live streamed and recorded for DVD and subsequent broadcast, so there was a 40 camera shoot, for which he used the BMFL Blades to replace all the ‘traditional’ 2Ks and 5Ks.

Having a fully focusable and variable lightsource gave him a huge amount of flexibility and saved immensely on focus time.

In Accra, Kurt used MJ’s 24 BMFL Spots and CEC’s 38 luminaires for the “Night of Bliss” show staged in the open air in Independence Square. The main stage was 80 metres wide and all the front lighting was provided by the BMFLs. 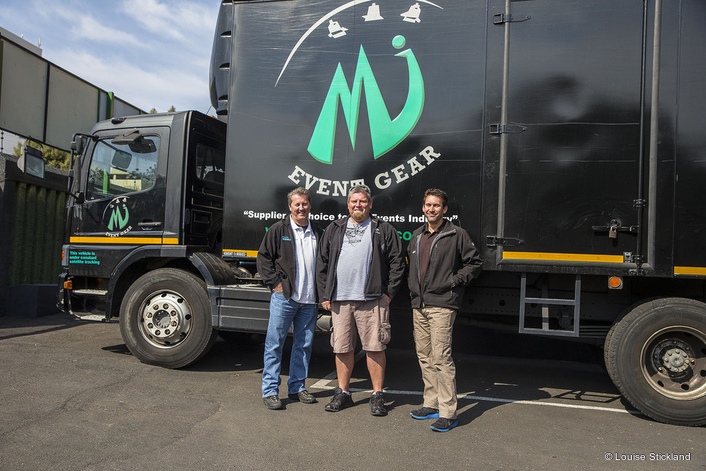 He was able to illuminate a 40 x 25 metre section of the stage using just 6 x BMFL Blades positioned 70 metres away which looked great on TV, and they also used two BMFL Spots as follow spots from the FOH tower.

At the LCA in Lagos, they are also used – with the additional handles - as follow spots positioned on the front balcony, with colour and intensity control run through the lighting console.

MJ’s BMFLs helped light the 2016 Miss South Africa beauty pageant, lit by LD, Joshua Cutts of Visual Frontier. Josh, Kurt and another top SA LD Chris Bolton - budget allowing – will not do a gig without them!

“It’s a powerful fixture and you can do just about anything with it,” says Kurt who also utilized them on a massive son et lumière produced by Solid Rock at the FNB Stadium in Johannesburg for the key sales teams, dealers and clients of Daimler Truck & Buses, a division of Mercedes-Benz South Africa (MBSA).

Dream Sets is another MJ client that regularly hires MJ’s BMFLs for long throw logo and other projection applications. Four units were used on Castle Light’s ‘Festival of Cool’ on Stanley Island in beautiful Plettenburg Bay.

They also projected over a kilometre with them from the Inanda Polo Club onto the Sandton City tower for another client.

“They are definitely living up to the ‘multi-functional luminaire’ description” concluded Mike.