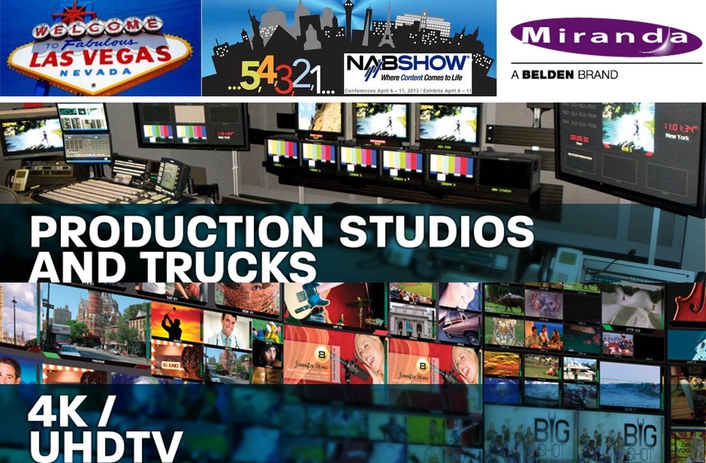 US debut of iTX Render Service for Adobe® After Effects® among the innovations on display
Miranda Technologies, a Belden Brand, a global provider of integrated solutions for production, playout and delivery systems for television broadcasters and multi-system operators, has announced several new solutions it will demonstrate at NAB 2013. Additionally, the company announced that, for the first time, the Miranda stand will showcase cable and connectivity solutions from its parent company, Belden, as well as its full range of Telecast Fiber Systems solutions.

Making its first NAB appearance will be Miranda’s iTX Render Service for Adobe® After Effects® CS6 software. The iTX Render service is a completely new approach to graphics creation that inserts the full creative power of After Effects CS6 into the playout workflow.

Other NAB firsts will include a new frame sync input card for the NVISION 8500 series of hybrid routers and a new, high-density, streaming media encoder, the SME-1901, which will be added to its acclaimed Densité modular range. 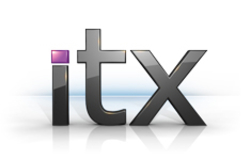 iTX Render Service
Instead of using a real-time character generator to play back graphics templates, Miranda’s iTX Render Service automates and manages rendering of Adobe After Effects projects into fully finished graphics, ready for playout from an iTX integrated playout platform or Miranda’s Vertigo graphics processors.
Benefits include the removal of creative limitations within an Adobe After Effects authoring tool and the ability to publish those complex, rich graphics on multiple channels from a single source. 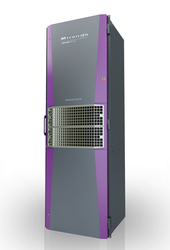 The NV8500 router also now features the option of a new DEM/EMB Output Card, a hybrid, 16-channel disembedding and embedding card that provides a high degree of flexibility with the ability to embed audio into any embedded audio channel – anywhere - while preserving the integrity of other embedded audio channels. From any standard input card, the DEM/EMB output card enables the router to easily shuffle original embedded audio as required for each channel.

Miranda’s new, multifunctional NV9648 and NV9649 control panels are able to emulate existing control panels from a variety of brands and offer more third-party interfaces and options than any control panel on the market, thus providing an ideal replacement for those looking to upgrade to highly advanced levels of control.

Miranda has also launched a significant upgrade to its NV9000 Router Control System which includes an all-new tieline management architecture that is more efficient and scalable that ever, even when using hundreds of tielines. The release of “Dynamic Hybrid Pathfinding” (DHP), enables less expensive hybrid router configurations to have unparalleled access to internal processing functions. DHP is unique to Miranda and is designed to allow any video input access the smaller hybrid disembedding and embedding resources of a router in such a way that the operator has no reason to care about how the router hardware is configured. This provides an affordable way to easily maximize the potential of a hybrid routing system.

Kaleido-MX and Kaleido-Modular-X Multiviewer Series
Miranda invented the modern multiviewer and continues to set the authoritative standard in their advancement. The introduction of Kaleido-MX and Kaleido-Modular-X extends that leadership with no-compromise video scaling quality that delivers true “any source, anywhere” processing that enables the flexibility to place any signal on any display at any size without blocking or bandwidth limitations. Sources can repeat on up to four different displays without the need for an additional multiviewer.

Available in an extensive range of standalone configurations from 8x1 to 48x4, and up to 64x4 in modular form, Kaleido-MX is equally at home in large studios and outside broadcast trucks. The possible configurations, which are delivered in either a 1RU or 3RU form factor, are specifically designed to be easy to understand, select, configure and install.

Kaleido-MX features outstanding picture quality for critical monitoring applications, seamless control — even across multiple rooms — and rich integration with any router or production switcher. The lightweight, easily cooled and ultra-quiet Kaleido-MX also boasts a compact design that requires significantly less power to run and its hot-swappable modules and power supplies ensure fast meantime to repair, even in the harshest environments.

The advantages of Kaleido processing are also available in modular form with even more flexibility in the Kaleido-Modular-X. The modular series enables monitoring systems to be created with a combination of versatile input/output cards, used as building blocks to simplify system design within a 3RU, air-cooled Miranda Densité 3 frame. The Kaleido-Modular-X modules use a powerful CPU to drive advanced features and provide excellent video and graphics quality with the ability, if required, to split processing between frames.

Handling sizes up to 64x4, Kaleido-Modular-X uses Miranda’s unique FlexBridge technology to reduce cabling requirements and remove the risk associated with HDMI extenders. FlexBridge is a coax cable interconnect that enables input and output modules to be connected within a frame or across multiple frames. This additional layer of flexibility enables input modules to be installed in a frame adjacent to the router while the output modules can be installed in a separate frame adjacent to the display.

SME-1901 Streaming Media Module
The SME-1901 is suitable for a wide range of IP monitoring applications (CATV or core router monitoring/audio/video production capabilities/remote over IP), combining high density with high quality to perform H.264 video and AAC audio encoding for up to 20 streams per frame. Multiple sources, in-plant and remote, are available over in-house IPTV to anyone who typically requires access. It supports all common streaming protocols and has six-port 3G/HD/SD distribution amplifier with support for fiber I/O via SFP cartridge.

The encoder supports metadata and audio embedding and an option for a bypass relay is also available, The encoder is designed for ready integration into facility-wide management and monitoring systems via Miranda’s iControl content monitoring and control platform.

4K Technology Demonstration
As broadcasters prepare themselves for the technological demands of 4K production and programming, so does Miranda. On the booth at NAB 2013, Miranda will demonstrate a series of solutions that are already suitable for 4K production, including routing and monitoring technologies that will play a key role in enabling broadcasters to reach this much anticipated “next big thing.”

About Miranda
For over 22 years, Miranda Technologies has been a leading worldwide provider of hardware and software solutions for the television broadcast, cable, satellite and IPTV industry. Its solutions span the full breadth of television operations, including production, playout and delivery. With a wealth of experience in delivering IT-based and traditional television systems, Miranda leverages its expertise to create the highest quality solutions available and delivers, deploys and supports them with a company-wide commitment to keeping the customer first. Miranda was acquired in July 2012 by St. Louis-based Belden Inc. and is the cornerstone of its broadcast division. Belden is a worldwide leader in the design, manufacture and marketing of cables, connectivity and networking products for many industries including broadcast, entertainment, consumer electronics, education, transportation and industrial automation.