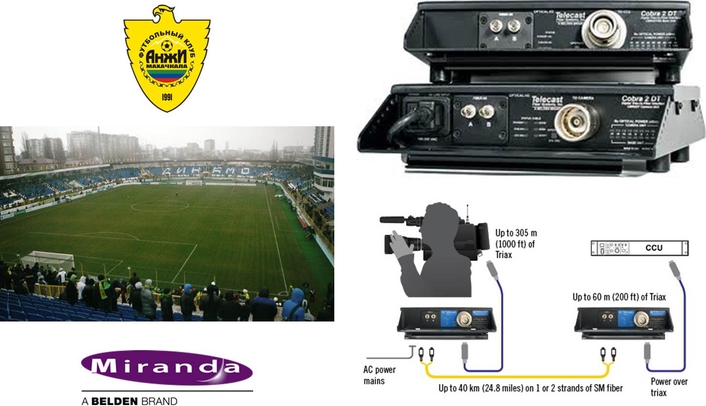 .
Miranda Technologies, a Belden Brand, a global provider of integrated solutions for production, playout and delivery systems for television broadcasters and multi-system operators, has announced the sale of Miranda’s Telecast Cobra 2DT fiber optic camera interfaces for deployment at Dynamo Stadium, the home of FC Anzhi in Makhachkala, the capital city of the Republic of Dagestan, Russia.

The dozen Cobra 2DT’s will greatly extend the range of a series of Sony HSC-300 HD/SD cameras currently being installed throughout the stadium. The Cobra 2DT enables fiber cable to be used between digital triax camera chains and their respective camera control units. Using a pair of fiber optic transceivers that seamlessly convert the camera and control units’ digital RF signals to optical signals, the Cobra 2DT transmits them over one or two strands of fiber to deliver all bi-directional video, audio, intercom and camera control signals between camera and base station.

Straker Coniglio, Miranda’s director of international business development for Telecast Fiber Solutions, said, “Dynamo Stadium is installing major upgrades in technical and broadcast infrastructure to improve broadcast coverage of their very popular football club. As The World Cup 2018 will take place in Russia, this can be seen as a significant rehearsal for technologies like the Cobra 2DT for possible use in venues throughout the country to broadcast football action from the various venues and, in five years’ time, to the world’s largest television viewing audience.”

The Cobra 2DT unleashes the full benefits of fiber connectivity. At only seven kilos per 1,000 feet, fiber deployment is fast and easy. Fiber also eliminates all electromagnetic and radio frequency interference, as well as ground faults and hum. The incorporation of Cobra 2DT transceivers enable venues and stadiums equipped with a modern fiber backbone to effortlessly share production facilities throughout the venue and beyond.

The sale was completed by Miranda’s Telecast dealer Teralink, based in Moscow.

About Miranda
For over 23 years, Miranda Technologies (www.miranda.com) has been a leading worldwide provider of hardware and software solutions for the television broadcast, cable, satellite and IPTV industry. Its solutions span the full breadth of television operations, including production, playout and delivery. With a wealth of experience in delivering IT-based and traditional television systems, Miranda leverages its expertise to create the highest quality solutions available and delivers, deploys and supports them with a company-wide commitment to keeping the customer first. Miranda was acquired in July 2012 by St. Louis-based Belden Inc. and is the cornerstone of its broadcast division. Belden is a worldwide leader in the design, manufacture and marketing of cables, connectivity and networking products for many industries including broadcast, entertainment, consumer electronics, education, transportation and industrial automation.