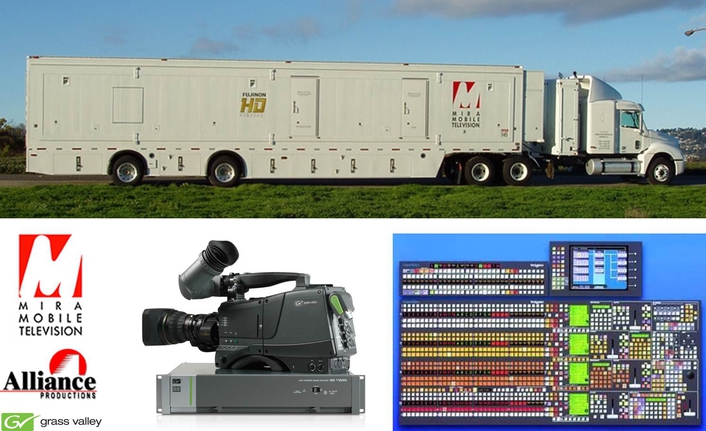 The new M-6HD is being rebuilt at MIRA Mobile’s facility in Wilsonville and will begin covering Pac-12 events in November. It will feature six Grass Valley LDK 8000 Elite HD cameras, six Grass Valley 3G Twin Base Stations—allowing the M-6HD's cameras to use either triax or fiber cabling, and a Kalypso™ Video Production Center switcher.

“We were impressed with the Grass Valley 3G Transmission system, because with its 3G Twin Base Station it gives us so much more flexibility to produce projects in virtually any stadium or arena our clients ask us to,” said Bill Duncan, Director of Engineering for MIRA Mobile Television. “We think the LDK 8000 Elite camera in combination with the 3G Transmission system is a far more elegant solution than anything else on the market. We didn’t have this flexibility with other cameras.”

The Grass Valley 3G Twin Base Station is a heavy duty, high-quality, multi-standard transmission system with new and specially developed advanced technologies that is fully 3G and 3D-ready. It supports current 1080i50/60 and 720p50/60 formats as well as future 1080p50/60 transmissions.

To leverage the most from its switcher investment, MIRA Mobile TV purchased a new Kayenne™ Video Production Center switcher for its M-9HD truck and moved M-9HD's existing Kalypso to M-6HD. With Grass Valley's compact and light weight switcher frames, the entire switcher installation was completed in just four days. On that fourth day the M-9HD truck was then used to produce an NFL football game in Seattle, Washington (Seahawks vs. the Tennessee Titans).

“We are huge fans of Grass Valley's production switchers and have installed several different models across our fleet over the years,” added Duncan. “One thing we like about Grass Valley technologies is that we can leverage them over several trucks if we need to and get more value out of them. The products are so reliable that we have the confidence to go out on the road immediately after installation.”

M-6HD will mostly operate on the West Coast, initially producing basketball games during the Pac-12 season and then work some NBA, NHL, and possibly some MLB events on the West Coast in the future.