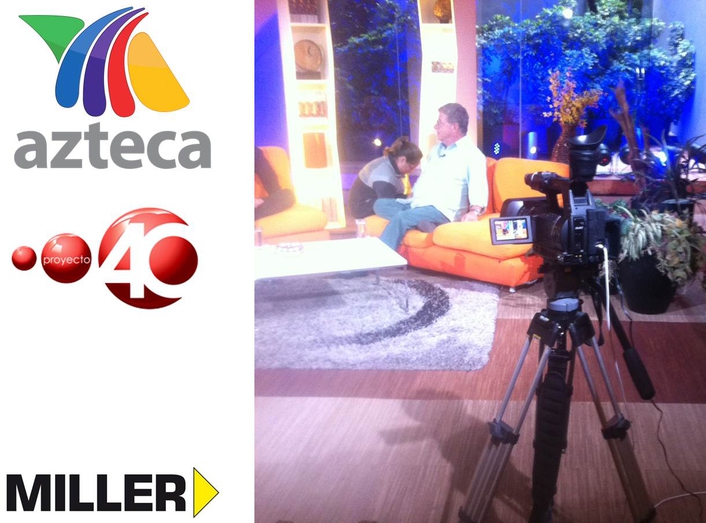 “Years ago, when I was the network’s engineering project manager in charge of equipment purchases for all of the TV Azteca stations across Mexico, I was asked to help upgrade the Azteca Locales station from analog to digital HD/SD technology,” Trevino says. “As I was analyzing the equipment in this station, I was surprised to find that some of the older tripods were still in great shape and were completely functional, even though reporters had been aggressively using them in the field for the last four or five years. They were Miller tripods. From that moment, I knew that Miller’s camera support equipment would be the perfect solution for TV Azteca’s Project 40 station upgrade.”

Trevino chose to purchase more than ten DS20 2-Stage Alloy Tripod, with ground spreader, systems for Project 40 due to the tripods’ light weight, rigidity and durability. The cost-effective camera support solution is ideal for broadcasters, as its height versatility allows reporters the flexibility to shoot from many different angles at a moment’s notice. “My team actually compared the height of this tripod with another manufacturer’s 3-stage tripod, and the DS20 had a higher reach,” adds Trevino. “Additionally, each leg has the capability to be set to a different height, which allows my reporters to get up-close and personal during their stories and capture shots from some interesting angles.”

Miller’s DS20 2-Stage Alloy Tripod system’s design features exceptional fluid pan and tilt head technology with 75mm ball leveling. The DS20 fluid head offers a two-position counterbalance knob, which can hold 5 kilograms (11 pounds) in the first position and can then support an extra five kilograms in the second position, reaching maximum capacity at a total of 10 kilograms (22 pounds). This ensures that the tripod can remain steady and stable under the weight of larger lenses and battery packs. “I know that I’m supplying my reporters with a very robust camera support solution with the Miller DS20,” Trevino says. “It is so sturdy that, even after years of use, the screws remain in place, holding the head, plate, handles and legs together with exceptional resilience. The Miller DS20 is the perfect tripod system for TV Azteca’s Project 40 broadcast needs.”