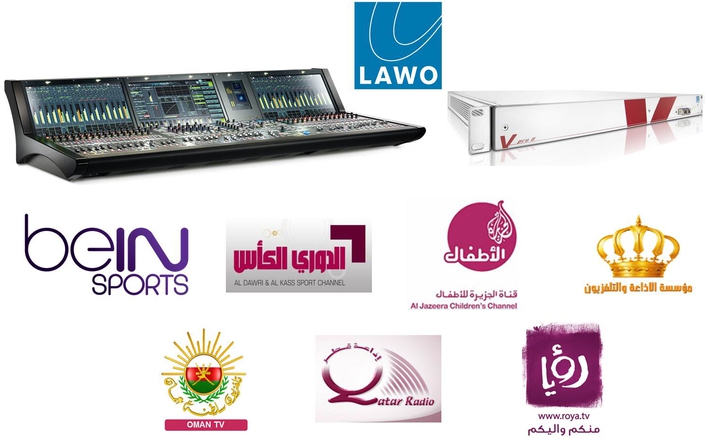 Reporting an extraordinarily successful year in the Middle East, Lawo has seen its pioneering IP-based broadcast production video, audio and control technologies and systems adopted by the region’s leading TV and radio broadcasters, including installations in Qatar, Jordan and Oman.

Installations across the region reflect the growing number and size of broadcast installations in the region’s Arab territories, as well as their increasingly demanding workflow requirements. Lawo’s involvement is also an indication of the continued success of the German company’s developments in TV and radio broadcast production. It also demonstrates that broadcasters in this expanding and technically demanding market are ready to adopt new approaches and future-facing technologies, and have found a strong partner in Lawo.

“We are becoming more and more recognized in the Middle East, not only for our products and projects in audio, but also as manufacturer of video solutions,” says Klaus-Jörg Jasper, International Sales & Project Manager at Lawo. “There is growing respect for our efforts in becoming a key technology partner e. g. for major international motorsport events, and at the recent soccer world tournament in Brazil.”

BeIn Sports has furnished its facility in Doha with a playout system supporting 32 parallel playout streams. The extensive installation comprises five new-generation 32-fader mc²56 consoles with a Nova73 router core, and several of Lawo’s V__pro8 compact, fully digital, 8-channel video processors – providing all of the ‘glue’ features commonly needed in broadcast production workflows. Within the facility, BeIn Sports operates 24 voiceover booths that are also part of the Lawo infrastructure. This accommodates de- and embedding of audio and control of mixing console routings, and supports the audio requirements of the translation of sports commentaries into English, Arabic, French and Spanish. Overall control is managed via a Virtual Studio Manager System (VSM), with a hardware fader unit for remote control of the VCAs of all the mc²56 consoles. The greatest advantage offered by this arrangement is that all assignments of the playout stream, voiceover booths, audio consoles and supervisor positions are entirely flexible, and can be adapted from situation to situation.

Two new 32-fader mc²56 consoles have been installed in Oman TV’s OB vans in Muscat and Salalah, and a third, 16-fader mc²56 – providing 192 DSP channels and 64 AES in/outputs – is at the heart of a flyway kit in Muscat. The mc²56 consoles support 96kHz, 24-bit digital audio with redundant signal paths and offer up to 8,192 non-blocking audio crosspoints in their matrix.
The HDTV OB vans have identical technical specifications, differing only in the number of AES ports supported by each console. The consoles are installed in 16-16 frames, each with an HD-Core loaded with four DSP cards, providing 384 DSP channels and 64 AES in/outputs. Alongside the mixing consoles, each truck is equipped with a Lawo DALLIS I/O unit installed within the vehicle, and a DALLIS stagebox for deployment at the broadcast location.
The DALLIS stagebox is connected to the audio network via RAVENNA.A further part of the system concept is Oman TV’s ability to share elements of the two setups. “To have several Lawo mixers means that they only need one spare parts package, and allows easy swapping of stageboxes between OB vans and flyway kit,” explains Klaus-Jörg Jasper. “In addition, this means that operators trained on one system are instantly conversant with the whole system. Oman TV values the general flexibility of the Lawo system, as it has to cover many different jobs – sports, news, culture, music shows and also recordings at the Royal Opera House.”

Al Jazeera Children’s Channel in Doha has equipped its new OB van with an mc²66 audio mixing desk, which has 32 faders and supports 384 DSP channels. In addition, it has two DALLIS I/O systems – one installed in the truck, and the other for use as mobile stagebox. The fully redundant system comprises DSP, as well as routing and DALLIS I/O. Another OB van being operated by Al Jazeera Children’s Channel is also Lawo-equipped – for large events, both trucks can be linked via RAVENNA to operate as a single OB resource.

With three OB vans equipped with Lawo systems and six mc²56 mixing desks installed in all, Al Kass is Lawo’s most loyal customer in Qatar. The latest OB truck to be commissioned is now underway, with a 48-fader mc²56 fitted with local I/Os and 384 DSP channels onboard. Its connectivity includes 96 AES in/outputs and two DALLIS stageboxes. A V__pro8 provides the video tools necessary to reconcile different video formats, as well as to bridge between audio and video management. High-quality format conversion, color correction, and audio embedding and de-embedding make the V__pro 8 a compact and powerful video processor that allows different standards and formats to be used as part of a single broadcast setup. The V__pro8 is a flexible matrix system –its 8x8 video matrix and 384x384 audio matrix make it  possible to switch any signal to any other. A modern HTML5-based GUI provides an ideal interface for easy handling of day-to-day work. One of the Al Kass OB vans recently handled live broadcast production of the Emir Cup 2015 in full DD+.

At Qatar Radio’s Doha facility a Lawo Nova17 RAVENNA-enabled routing system is handling audio streaming to Workstation PCs, which are currently being used as an Intermediate/Distribution Router in the broadcaster’s master control room. A founder member of the RAVENNA Alliance, Lawo is also part of the Alliance for IP Media Solutions (AIMS) independent trade association, which  has been established to bring IP solutions to market with full interoperability based on open standards – promoting greater innovation and efficiency through improved media workflow.

Two further Nova17 routers are also providing service as Intermediate/Transmission routers for JRTV, at its facility in Amman. Offering the same quality and features that are found in larger Lawo routers, the Nova17 is designed for use in broadcasting and production applications. It can be used for signal distribution, as well as format conversion or as a MADI breakout box.

The first Lawo mc² mixing console to go into service in Jordan has been supplied for a new OB van commissioned by private broadcaster, Roya TV. The 40-fader desk features seamless integration of Waves SoundGrid servers, providing extensive real-time signal processing in addition to its internal processing engine. The system gives operators access to Waves’ comprehensive plugin library, allowing full control over reverbs, multi-tap delays, graphic equalizers and multiband compressors via the console’s keyboard and touchscreen. No additional monitors or controls are needed, ensuring an efficient working space with less external hardware. All plugin settings can be stored and recalled along with the console’s snapshots. Flexibility and connectivity are further improved by the use of a compact I/O as the vehicle’s stagebox.
“It is very pleasing that existing and – as with Roya TV also new customers – trust in our technology, and appreciate our after-sales support,” Klaus-Jörg Jasper concludes. “I am confident that if they have to extend the system, there is no question that it will be Lawo again.”

About Lawo
Lawo designs and manufactures pioneering audio and video technology for TV and radio broadcast production, post-production, as well as live performance and theatrical applications. Products include digital audio mixing consoles, routers, video processing tools as well as solutions for IP-based A/V infrastructures and routing systems. All products are developed at the various Lawo locations and manufactured according to highest quality standards at the company’s headquarters in the Rhine valley town of Rastatt, Germany.