From studio production to documentaries, sports or live-events, this new Hitachi camera systems offers an elegant migration pathway from HD to 4K ultra-HDTV. The use of standard HD lenses with the SK-UHD4000 eliminates the need for special conversion adapters. This feature allows broadcasters to effectively use their existing lenses and shoot video in 4K resolution, while at the same time retaining the easy handling and operability of broadcast cameras currently in use.

“The SK-UHD4000 is our most advanced camera system: an innovative 4K Ultra-HDTV camera that makes it easy to produce programs shot in 4K resolution which is forecast to become the industry standard in the near future,” said Cemal Yilmaz, General Manager of Hitachi Kokusai Turkey. “It provides effective solutions to the challenges of live sports broadcasts outdoors, such as sensitivity and depth of field.”

The SK-UHD4000 is equipped with a newly developed Hitachi 2/3-inch MOS sensor. This sensor makes it possible to produce video images with high sensitivity and high resolution. It also helps to significantly reduce the amount of power consumed.

Direct installation of B4 lenses for conventional HD broadcast cameras
The 2/3-inch B4 lens mount enables broadcasters to use their existing lens stock, allowing them to continue using these valuable assets. Operationally, since the SK-UHD4000 has a 2/3 inch prism, optical characteristics such as depth of field and focus will be the same as a 2/3 inch Broadcast HD camera. For demanding applications, such as live sports broadcasts, 4K-resolution content can be produced just as easily as with conventional HD programs. 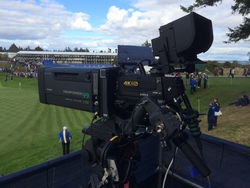 About Hitachi Kokusai Electric
Hitachi Ltd. (TSE: 6501), headquartered in Tokyo, Japan, delivers innovations that answer society’s challenges with our talented team and proven experience in global markets. The company’s consolidated revenues for fiscal 2013 (ended March 31 2014) totalled $93.4 billion USD. Hitachi is focusing more than ever on Social Innovation Business, which includes infrastructure systems, healthcare and other. Hitachi Ltd is a major stakeholder of Hitachi Kokusai Electric which is a world renowned manufacturers of innovative, high-performance telecommunication products . Hitachi Kokusai Electric is one of the most significant Japanese companies developing advanced broadcast camera technology.