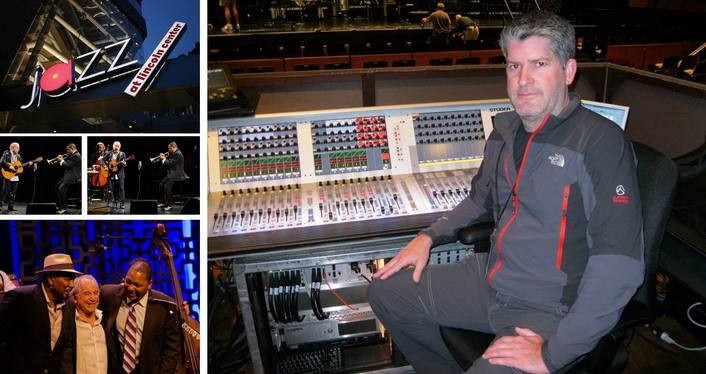 Conner and his team were using the Studer Vista 5 in conjunction with the Soundcraft Vi6 as a sidecar
It’s the kind of extraordinary musical event that happens once in a lifetime: quintessential singer/songwriter Paul Simon got together with iconic jazzman, composer and music educator Wynton Marsalis for a very special three nights of live performances at the Jazz at Lincoln Center in New York City. The event featured Simon and Marsalis performing all-new orchestrations of Simon’s songs with the Jazz at Lincoln Center Orchestra and special guest Aaron Neville. HARMAN’s Studer® Vista 5 and Soundcraft® Vi6 digital consoles were brought in to handle the considerable mixing requirements for the concert.

“There were more than 100 inputs for this show,” noted Michael Conner, Simon’s front of house engineer and a veteran mixer with more than 25 years’ experience. “We had to mic not only Paul, Wynton and Neville but the entire Jazz at Lincoln Center Orchestra and Simon’s touring band.”

Conner had to combine two different approaches to mixing for these concerts. “Paul is usually mixed more for an arena or theater-type show, while Wynton’s is more of a ‘natural’ sound, combining the room, band and PA as one sonic unit,” he noted. “The sound is less ‘poppy’ and more ‘orchestral’ maybe, compared to Paul. It made this concert more challenging than most because we had to combine those two different styles of mixing together and get something that worked.

Conner and his team came up with the solution of using the Studer Vista 5 in conjunction with the Soundcraft Vi6 as a sidecar. “I’d had about four years’ experience with the Vista 5, having used it on tours with David Byrne and then with Paul,” Conner added. “Wynton is normally mixed on a Vi6, so using the two together just made sense, along with the fact that they’re both HARMAN products and are easy to interface with each other.”

“One of the best things about the Vista 5 is when you’re looking to access a particular function,” Conner continued. “I came from an analog background. This is not a confusing digital desk. The channel strip is in front of you at all times. You can reach the gain pot; you can reach the EQ; anything you need is always right in front of you. Touch a button and there it is—everything is easy to get to, making it easy to operate and smooth to mix on.”

Such nimbleness is especially handy when mixing Simon. “Paul makes a lot of changes to the arrangements on a daily basis,” Conner said. “In his opinion the song was born when it was put on the album and then it grows up and evolves through time. So we might come into a show and change a song completely, change an arrangement or change a part. That would be tough if it were difficult to move around the desk. Paul also expects that when he makes a change, he’ll hear it quickly. The console allows me to do that because the interface is so straightforward. Paul is an ‘analog guy’ and he’s used to grabbing a knob and hearing something happen. Some of the other consoles out there are great, but are a little cumbersome when it comes to making adjustments or changes. That’s one of the reasons I prefer the Studer.”

The concert was a resounding success, according to Conner. “We were able to achieve a really good sonic blend between all the musicians and performers while maintaining clarity and isolation of the vocalists and instruments,” Conner pointed out. “By the time we were into the concert, I knew we had nailed it.”

Conner started his career in Los Angeles around 25 years ago; learning by working in the area’s recording studios, starting his own sound company and moving to his current position with Clair Global. “I’ve done tour sound, theater sound, the whole nine yards. It’s been a 25-year journey and now I’m really happy with Clair—without them I wouldn’t be sitting here right now doing front of house for Paul.”