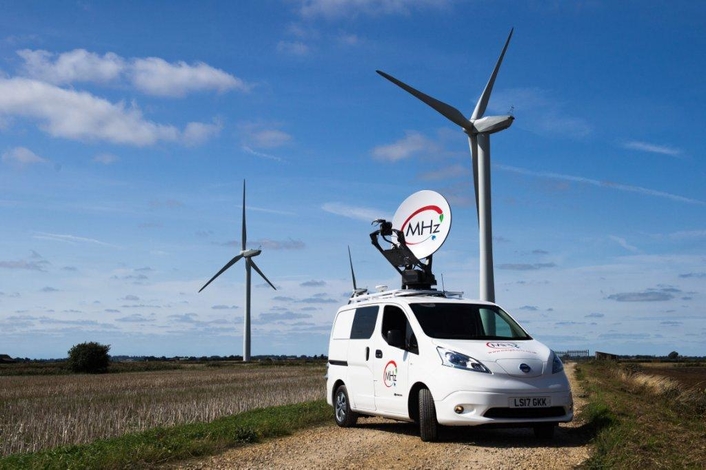 Megahertz unveiled the green future of city newsgathering at IBC 2018

The ev-SAT concept vehicle is built on a Nissan e-NV200 electric van, and immediately after IBC it will enter trial service with BBC News in London.

“We recognised that running diesel-powered broadcast trucks into city centres was becoming increasingly untenable,” said Steve Burgess, CTO of Megahertz. “Broadcasters have their own environmental responsibilities, and cities are increasingly imposing heavy penalties on particulate-emitting diesel vehicles. We wanted to demonstrate that we could provide the right functionality in an all-electric vehicle for newsgathering in the urban environment.”

The new vehicle draws on the large number of rapid response newsgathering vehicles Megahertz has built for broadcasters. It provides the facilities to get to a story quickly, capture footage, transmit live, and/or edit on site, and forward it via satellite or bonded cellular. Any electric newsgathering unit has to provide all this core functionality.

ev-SAT contains the same standard equipment as diesel-powered units, Aluminium racks and fittings are used wherever possible to reduce weight, and cable runs have been carefully optimised. Lithium batteries are used for technical power, as they provide a considerable saving in terms of size and weight.

At IBC2018 ev-SAT was demonstrated with the new lightweight AirPro 75cm Ka-band dish from Vislink. In service with the BBC, though, the vehicle will be fitted with a 1 metre Ku-band dish from AVL, to make the unit compatible with the rest of the fleet.

“The clever part of the design comes in powering everything,” Megahertz’ Burgess explained. “The 400V traction power system cannot be touched as the vehicle has to manage that. So we are developing a neat way to intercept at the charger socket, which will negotiate with the power source, and distribute the charging between technical power and traction power.

“This allows the operator to determine the priorities at any time,” he added. “We can even tap into the vehicle’s auxiliary 12V feed – which normally powers systems such as the windscreen wipers and radio – and use that to top up the technical power if you just need a few more minutes of technical power to complete an edit or send the package.”

While the concept vehicle is built on a Nissan e-NV200 chassis, the design is such that it can be adapted to other, potentially slightly larger vehicles as they become available in pure plug-in electric form.

According to the AA in 2017: “Air quality in urban areas is an important issue and more than 200 cities in 10 countries across Europe are now operating Low Emission Zones where the most polluting vehicles are either banned or charged an access fee,” so the timely launch of ev-SAT means that broadcasters will be able to freely access these areas, which are set to increase.

The BBC is committed to the Albert certification scheme.  Made up of 300 ‘screen arts’ companies, Albert exists to support the UK production and broadcast industry’s transition to environmental sustainability, working in collaboration to accelerate the adoption of best practice. This scheme allows teams to measure their efforts of mitigating their impact on the environment.

The ev-SAT was the centrepiece of the Megahertz presence at IBC2018, where staff will be on hand to discuss design and build projects for fixed and mobile installations.

About Megahertz
Megahertz is trusted by the world’s leading broadcasters, content owners and media service providers to design, engineer and consistently deliver high quality fixed and mobile turnkey systems. As a leading systems integrator in an industry that is in the midst of transitioning to multiple new formats, including 4K, 8K, UHD, Cloud and IP-based workflows; its expert team of skilled engineers and solutions architects, are drawn from both broadcast and IT backgrounds and are dedicated to ensuring that an imaginative, forward-thinking and highly efficient approach is taken to both traditional and cutting edge projects.

Pushing the boundaries to find the right solutions for its customers with a focus on quality and cost-certainty, Megahertz provides dynamic and resilient bespoke systems that balance the individual technical and commercial challenges faced by the proprietors and operators of such facilities as news and sport production sites, state-of-the-art studios, network operation centres, educational facilities, and mobile outside broadcast/newsgathering vehicles.

Serving its clients from a 2000 square metre engineering facility in Cambridgeshire, UK and a Singapore office, Megahertz is able to pre-fabricate even the largest of systems and carry out its own coachwork for vehicles.

With a reputation for excellence since 1982, Megahertz is an independent global leader in systems integration with solid financial backing and one of the longest standing histories in the industry and constantly winning repeat business from high profile customers such as BBC, BT Media & Broadcast, Globecast, RaceTech, Vive TV, RT, and e.tv.