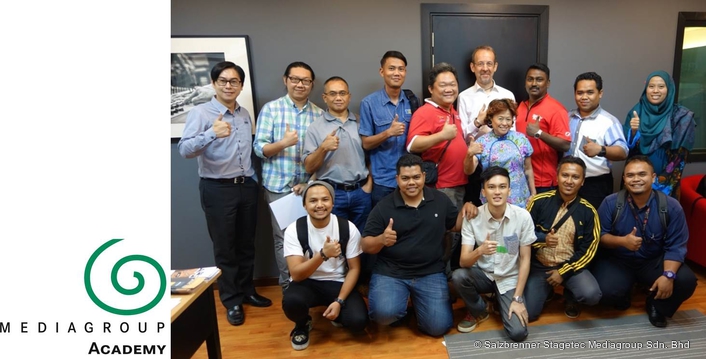 Part of the participants together with Advon Tan (far left) and Jean-Paul Moerman (back row, 4th from right)

Two seminars, “Immersive Sound: Introduction to Dolby Technologies” and “Revive the Concert: 5.1 Surround Sound Production”, by Jean-Paul Moerman at the Mediagroup Academy in Kuala Lumpur proved spot-on presentations for what the Asian pro audio and broadcast sectors consider burning questions. A combined audience of 30 gathered at the Mediagroup Academy’s state-of-the-art facility on 7th of September (Immersive Sound) and 8th through 10th of September (Revive the Concert) to learn about what today’s technology has to offer, planning 5.1 productions, improving the in-house workflow and devising strategies for leveraging the production content at hand for effective 5.1 productions.

Jean-Paul Moerman, a broadcast specialist with extensive knowledge about production processes and sound systems, founding member of EBU PLOUD and much-in-demand consultant, kicked off his two-part surround seminar with a general introduction to multichannel sound and essential guidelines for surround productions. Attendants from all over Asia learned about the typical surround production chain, the recommended configuration of a surround control room as well as system engineering aspects for the on-air and streaming delivery of content in the Dolby E and Dolby Digital formats. Geared towards a production audience desirous to come to grips with the fundamentals of surround sound for HD 5.1 productions, this introduction also covered dealing with production artefacts and contingency planning. Moerman illustrated his various points with numerous AV clips and case studies of music talent shows and sports programs produced in 5.1 to demonstrate the importance of a thorough strategy. 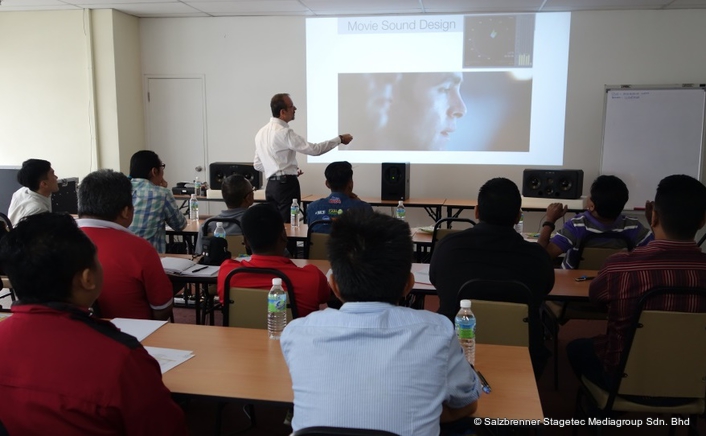 How to Transport Your TV Audience
An in-depth discussion of the nuts and bolts of championing surround sound and Dolby technologies, the second seminar, “Revive the Concert: 5.1 Surround Sound Production,” was spread over three days (8th through 10th of September). Focusing on how the television audience of live music award shows and sports events perceives—and ultimately judges—a 5.1 mix, this seminar discussed the notions of ambient sound and the ingredients for a convincing immersive sound stage. Moerman provided detailed guidelines for drama, news, sports, and music productions.

John Anthony, an AV systems engineer, comments: “As Malaysia moves towards full digitalization and multi-channel audio, the Mediagroup Academy training was apt and timely. It has provided me with a deep insight of multi-channel audio mixing and distribution. I reckon it has also bridged the gap as far as knowledge and technology is concerned to all participants. At last, someone was able to explain to me comprehensively how multi-channel audio content is mixed and distributed to the homes!” 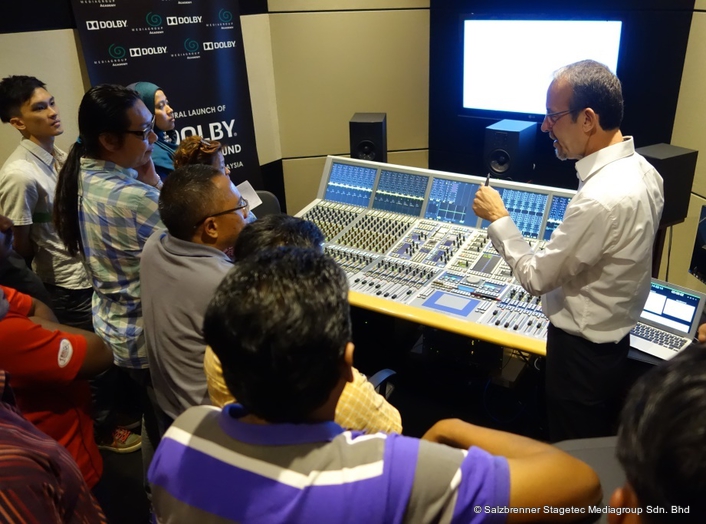 Mediagroup Academy: the first fully equipped Dolby 5.1 surround training facility in Malaysia
Advon Tan, managing director of Salzbrenner Stagetec Asia, was clearly thrilled by the attendants’ enthusiastic response: “The Mediagroup Academy was set up with the intention to enhance skills and knowledge in this part of the world. As the first fully equipped Dolby 5.1 surround training facility in Malaysia, our new venue proved the perfect location for this event. From what I hear, broadcasters and production houses are now eager to implement what they have learned over the past few days.”
Participant Martyn Gillman confirms this: “I would like to add my thanks for a really great 3 days. The amount of detailed information and practical experience given will, I'm sure, aid any of us tasked with delivering 5.1 audio. Your keynote presentation with so much AV content was superb.”

Jean-Paul Moerman adds: “One of the highlights in the seminar was the in-depth case study of the AJL Music Awards show well-known in South-East Asia which has more than five million viewers.  This is a genuine 3 hours live show with over 170 audio sources on stage.  No backtracks, no music on tape, no tricks.  Participants were pleasantly surprised by the professional sounding voices enveloped by the venue audience, getting a real treat with a full strings section into the immersive 5.1 mix.  The Aurus console and extensive Nexus audio network easily managed all resources, layer distribution and paging, VCA grouping, and provided genius snapshot/scene automation… all giving you a clear head which is vital for a successful result in 5.1 live production.”

The Academy began providing courses for both Salzbrenner Stagetec Mediagroup customers and the general public in 2008, originally in locations such as hotels and broadcasters’ own facilities. Inaugurated in June 2015, the Academy’s new home in Kuala Lumpur includes a seminar theatre that seats up to 40; a number of acoustically treated and purpose-designed studios with a broad range of equipment; the Dolby 5.1 surround sound suite, described by Mr Tan as a “full-fledged production, mastering and recording studio”; and an on-air radio studio that can function as a live broadcasting hub.

The Mediagroup Academy’s mission is to assist Malaysia in its efforts to achieve its development vision for 2020. The new facility was built to increase the number and scope of both basic and specialist audio training sessions. The standardisation of digital TV, scheduled to launch this year, has led to skyrocketing demand for Dolby tech, surround sound and loudness management sessions. Advon Tan: “The two seminars on 7th and 8th through 10th of September are here to prove that our concept of a new education platform for media professionals and practitioners comes in the nick of time.”