Media Links and VIDI Partner to Score with Brazilian Football 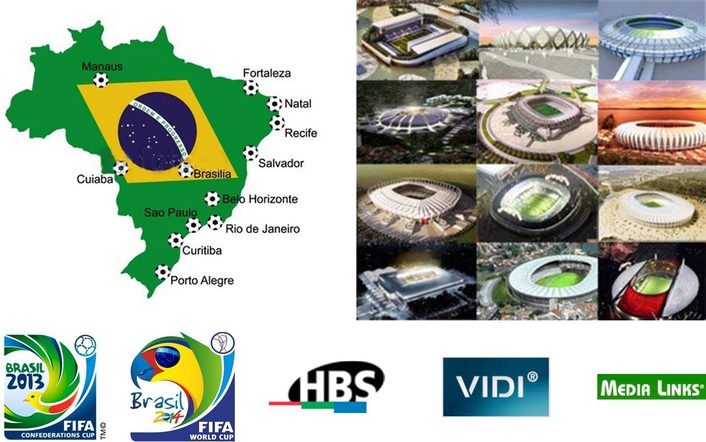 .
June 15, 2013 marked the start of an exciting series of soccer tournaments in Brazil. Two of the highlights include the 2013 FIFA Confederations Cup, which ran from June 15-30, and the 2014 FIFA World Cup, which will be played June 12 to July 13 in 2014. The FIFA World Cup is the single largest sporting event in the world and all soccer fans will be tuned in.

The Media Links MD8000 HD-SDI over IP transmission technology and solutions were chosen to serve all contribution links for the FIFA Confederations Cup. Media Links partner and systems integrator, VIDI Gmbh was selected to supply and support the technology that was used to link the contribution circuits between the six venues. The six venues, located all over Brazil from the north in Castelao all the way to Rio de Janerio's Maracanã stadium, were each linked to the International Broadcast Coordination Center (IBCC), located in Belo Horizonte the capital and largest city in the Brazilian state of Minas Gerais, in the southeastern region of the country. 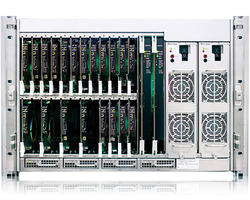 The venues were linked with the IBCC using fiber optic cable, and all content was fed back and forth between the venues and the hub, leveraging an IP backbone. The MD8000 transport solution serves as a networking platform, which eliminates additional points of failure and complexity within the signal path, ensuring zero delay in the end-to-end transmission path.

The MD8000 system is also scalable and modular, which means the configuration of the system can be matched to the demands of individual situations. Robust redundancy with a hitless operation supports its strength as platform that guarantees quality of service all the way to the edge and the end viewer.

VIDI provided turnkey services for the 2013 FIFA Confederations Cup, including two engineers at each of the six stadium venues, and four engineers at the IBCC. Services include initial installation, as well as monitoring during the entire transmission period of the event.

Host Broadcast Services (HBS), Host Broadcaster of the 2013 FIFA Confederations Cup are responsible for all the audio and video coverage of the tournaments. HBS also oversees the installation of all equipment related to the coverage. HBS chose VIDI Gmbh based on their past experience together, and the great success of the UEFA Euro2012 tournament, whereby all contribution links were served by the Media Links MD8000 HD-SDI over IP transmission solutions and codecs.

About Host Broadcast Services
Host Broadcast Services (HBS), fully owned by Infront Sports & Media*, is a specialist host broadcast organisation, originally established with the core mandate of producing the television and radio signals for the 2002 and 2006 FIFA World Cups™. Based in Switzerland, but with its planning headquarters in Paris/Boulogne, the company has evolved since its formation in 1999 and built upon its unique capabilities by attracting expert personnel from the very top levels of the television industry to complement the experienced staff who have honed their skills over previous FIFA World Cups™.

* Infront Sports & Media AG - of which HBS is a 100% subsidiary - is an international sports marketing company with an exceptional track record on major events. Infront has its headquarters in Zug, Switzerland and offices in nine countries. Host Broadcast Services AG is a subsidiary of InfrontSports & Media AG.

About VIDI GmbH:
VIDI GmbH is a leading service provider and expert in technical consulting, project planning, and systems integration in the converging broadcast and telecommunication industries. VIDI is an independently run and privately owned company with its headquarters, research facilities and sales & support department based in Darmstadt, Germany.

To address the specific needs of its national and international customers, VIDI has focused its organization around four major business units. These businesses include VIDI-Events, the transmission of live events, VIDI-SI, the system integration services and VIDI-24, a 24 hours/365 days a year service & support unit. In addition, VIDI-PLUS forms part of the company portfolio, which includes the development of software as well as the resale of high quality broadcast products from selected manufacturers.

VIDI's focus is on a customized approach that combines deep insight of the specific technical and economic requirements of its customers as well as the dynamics of the broadcast and telecommunication markets. This approach is grounded on more than 25 years of experience of the VIDI team.

About Media Links
Media Links is a leading developer and manufacturer of broadcast network infrastructure solutions. Its mission is to offer broadcasters and network providers throughout the world leading edge technology, enabling them to economically convert and move the complete suite of broadcast signals - whether video, audio or data - onto their multi-service networks. Operating as a pioneer at the forefront of technological innovations and advancements, Media Links provides the only standards based product suite in the market that enables the adoption of media signal types to Telecommunication standards like Ethernet, IP, SDH and SONET.