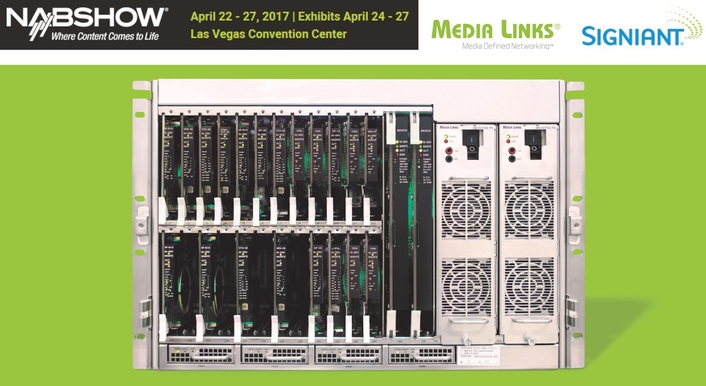 On display will be Signiant’s Manager+Agents™ software solution that automates the delivery of large media files across geographically dispersed locations, operating in conjunction with Media Links’ new 10Gb/s Hitless Data feature for its MD8000 Media over IP transport platform.

The demonstration will highlight how media & entertainment carriers, broadcasters and sports producers across the globe can take further advantage of ever-increasing bandwidth available at stadiums and other edge venues to move more and more data in addition to conventional broadcast video and audio signals. All over longer distances, and across borders and continents with faster speeds, throughput and resiliency than ever before.

Media Links’ new 10Gb/s Hitless Data capability provides uninterrupted data transport across any network and is accomplished with Media Links’ new GbE line card configured for 10Gb/s single port mode, operating over 10GbE trunk modules on the MD8000 media over IP platform. Based on the sequence number and timestamp of individual data packets, any network disturbance is immediately detected, resulting in a seamless (hitless) switchover to a redundant stream.

Set up between the booths of Media Links and AT&T in the upper south hall of the Las Vegas Convention Center, a MD8000 media over IP transport network with media servers on each end is provisioned as a 10Gb/s hitless data pipe. Signiant's Manager+Agents software performs file transfers between the servers, while providing administrators control and visibility of file movement via its Manager dashboard. This dashboard will display transfer rates, including throughput and progress of the transfer.

The MD8000 network is also set up with a fiber patch panel in each of its two main fiber network trunks to demonstrate the 10Gb/s Hitless Data feature. Removing any one of the two fiber patches, representing the loss or corruption of one of the lines, shows no interruption of file transfer performance or progress on the Signiant Manager dashboard, highlighting the 10Gb/s hitless feature as it seamlessly switches over to a redundant fiber.

“During live media and sport events, production teams now want significant amounts of supplemental media file content and other data to accompany the live video/audio transmission,” explains Tom Canavan, President of Media Links Inc. “This has resulted in a huge demand for the transport of data back and forth between venues and production facilities. Feedback from both our clients as well as discussions with various industry groups continually highlight the growing need to transport more and more data in addition to the myriad broadcast video/audio formats, resolutions and compression methods we support.

About Signiant
Signiant’s solutions are used by most of the world’s top broadcasters, studios, media service providers, sports networks and game developers to facilitate the secure movement of large media files – from pre-production content and mobile news to finished-format movies, trailers and TV episodes – between users, applications and systems. The company’s leadership in the cloud era has enabled new use cases and innovative new delivery methods; all built on a foundation of advanced technology that has long been trusted in mission-critical applications.

About Media Links
Founded in 1993 with its headquarters in Kawasaki, Japan, Media Global Links Co., Ltd. is a leading developer and manufacturer of broadcast network infrastructure and media transport solutions. Media Links is the umbrella brand name supported by Media Global Links in Japan, Media Links Inc. in Connecticut, USA, Media Links EMEA in the UK and ML AU Pty Ltd. in Australia. The Company’s mission is to offer broadcasters and network providers throughout the world leading edge technology, enabling them to economically transport the complete suite of content signals – 4K, HD/SD video, audio or data - onto their multi-service IP/Ethernet networks. Operating as a pioneer at the forefront of technological innovations and advancements, Media Links provides the only standards based product suite in the market that enables the adoption of media signal types to Telecom standards (IP, Ethernet, SDH, SONET). In 2014, Media Links was awarded a Technology and Engineering Emmy® Award for Standardization and Productization of JPEG2000 (J2K) Interoperability. Media Global Link’s common stock is listed and traded on the JASDAQ Market of the Tokyo Stock Exchange under the Security Code Number 6659