.
The brand new Ghelamco Arena in Gent – new home to football team KAA Gent  has   just opened in a blaze of glory, complete with a cutting-edge media façade on all four sides and a spectacular exterior architectural lighting scheme designed by leading European creative visual design practice, Painting With Light.

Genk, Belgium based Paining With Light was asked by Philips Lighting Solutions  to propose a complete scheme with bespoke control solution for specialist visuals in certain areas of the new venue. Their concept was chosen by the project’s Chief Developer Paul Gheysen, CEO of Ghelamco.

Led by Luc Peumans, the PWL team utilised their cross disciplinary experiences in the worlds of entertainment and rock ‘n’ roll and their penchant for stylish building lighting to deliver a spectacular result in a very short timescale … of just under two months!

This was the biggest challenge, but one that Peumans and his team also took completely in their stride!

“It was a fantastic project in which to be involved,” enthuses Peumans, “And I am very proud of the results achieved in this extremely short timescale. It was also a great collaboration between us and Philips who supported us through every stage”.

The dynamic and highly flexible Media façade is built from approximately 9 kilometres (85000) of Philips CK iColor Flex LMX product – flexible strands of intense colour changing LED pixels 12 cm apart. These are placed in vertical lines with a vertical pitch of 12.5 centimetres apart all around the building. The horizontal pitch is 115 cm and the façade covers over 10.000 square metres in total. 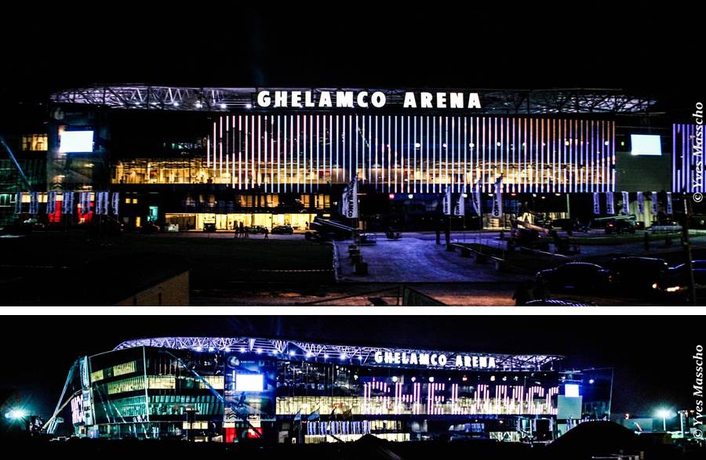 Painting With Light has also produced a quantity of custom media content for the installation, some of it highlighting sponsors logos and other clips consisting of high-impact ambient material and texturing, converging in eye-catching animations.

Special events and information or promotions can also be graphically displayed or appear as text on the exterior of the Arena and new content can be produced and programmed into the system at any time.

This feature also enables the building to stand out completely from its surroundings as an iconic structure on the local landscape. The unique Arena’s location, close to the highway intersection, makes it a perfect media tool and it has a potential viewing capacity of 3 million people per month!

One of the reasons the Paining With Light scheme was chosen was due to its commitment to sustainability, power saving capacity and low on-going running costs with it being primarily based on LED fixtures.

The roof is outlined with another 140 x Philips Color Kinetics eW Graze Powercore LED strips which can dramatically change colour. The cantilevered overhanging sections around the roof are coloured using 232 x Philips CK ColorBlast PowerCore LED floods. At ground level, the gallery level section of the building shell is illuminated with another 220 x ColorBlast PowerCores. 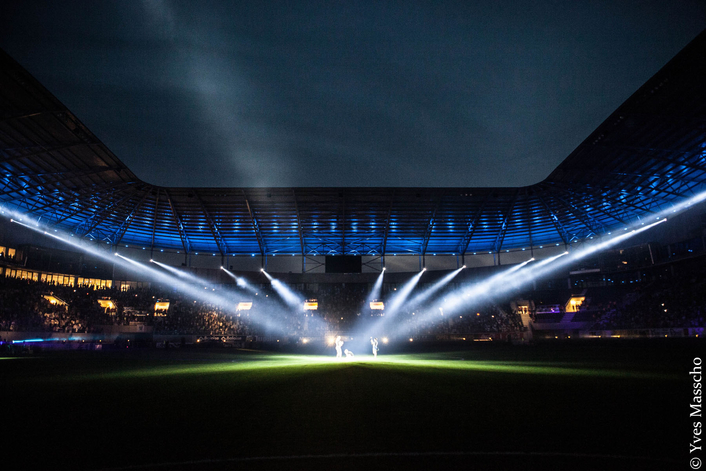 All of these lighting fixtures have been pixel mapped to allow video content to be run through them as well as onto the Media Façade, allowing lighting to be matched to the current video content on display if desired, producing various colour glows and other subtle but sympathetic effects.

The lighting and the Media Façade can also be triggered by sound inputs and there are a number of inbuilt public interactivity options in the system which will be further developed once the 20,000 capacity Ghelamco Arena is in day-to-day use.

At the front entrance, the lighting design is completed with eight panels on the outside which are up-lit with 64 x ColorBlazes, plus eight advertising posts each with three Clay Paky Sharpies mounted in Igloo weather domes on the tops for creating piercing beam effects.